WKO5 is here and it looks... different

I’m going to do my extensive progression at threshold

i’m not sure what YOUR definition of “extensive progression” is here, but it’s not how either Tim Cusick or Kolie Moore are using the term in their videos/pods, its not how WKO is breaking down, and its not how I was referencing it.

Their delienation seems to be that Extensive ends up being more SST, intensive is working right around your FTP wattage.

Question is which intensity to go with? There’s not THAT much difference between 90% and 95, 97, 100% in terms of the physiological benefit.

There’s not in terms of adaption, but there is in terms of fatigue. Hence my earlier comment, and KM’s Watt Doc #39 commentary about working more at the “extensive” level, rather than trying to push right at threshold. You simply can do MORE work, for longer, with LESS fatigue and required recovery. When you put this into the context that the biggest driver of growth is consistency and volume, being able to do more and recover from it is going to help you out more in the long run.

Now…I will caveat all of this with you need to eventually do some specific work, especially if you are doing TT’s and need to be able to ride at or near threshold, but in an overall training plan that is a relatively small % of your overall workouts that occurs closer to your races.

edit:
I will leave the link to the KM watts doc #39 I referenced above. It’s a worthwhile listen and goes into detail why “riding at threshold” can really be a bit of a knife edge excercise.

i’m not sure what YOUR definition of “extensive progression” is here, but it’s not how either Tim Cusick or Kolie Moore are using the term in their videos/pods, its not how WKO is breaking down, and its not how I was referencing it.

Their delienation seems to be that Extensive ends up being more SST, intensive is working right around your FTP wattage.

Thats not really what those terms mean though does it? Extensive=volume/time, with wattage or % of FTP mattering less, and intensive work = exact power prescriptions, or percentages of FTP, so the way I’m reading Kurt’s post, he’s saying he is increasing time at or near threshold rather than pushing up power for the same interval length. That’s always been my interpretation of the term in general at least outside the context of training specifically

No.
Per the optimized interval chart this is the breakdown: 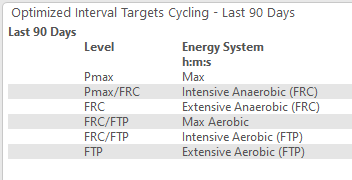 Not really following all the points, but one of Tim’s more recent WKO5 webinars had this with respect to training FTP: 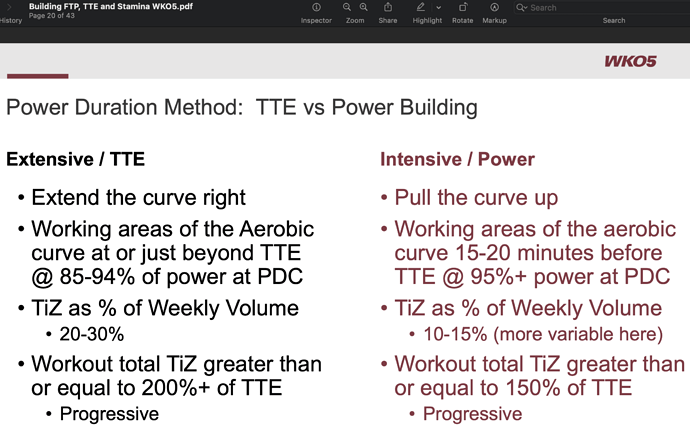 Taken from the slides of this webinar:

and that page includes a link to a PDF of the slides.

and a few more slides: 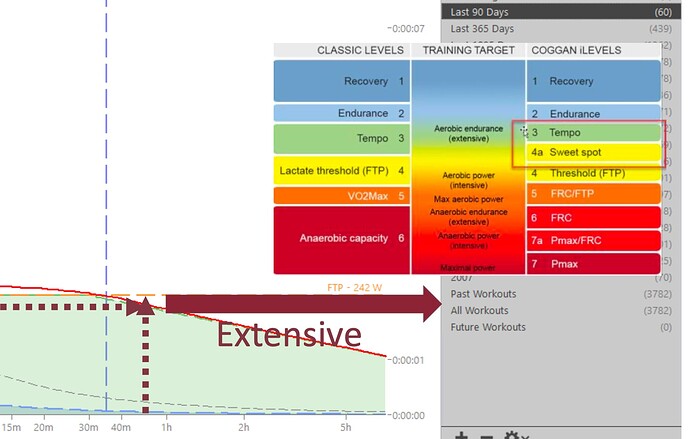 and extensive (red) vs intensive (purple) example for someone with 35 minute TTE: 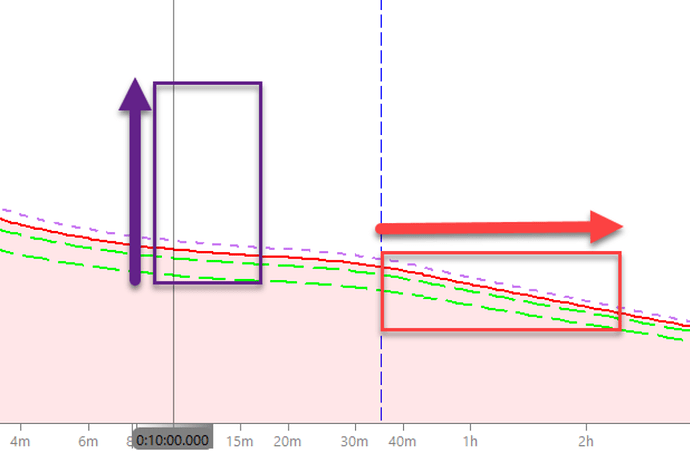 Yeah you guys have looped around all of it. My take:

Extensive means at or below threshold extending TIZ. Power or zone target then spells out how much time you aim for and how aggressive your progression is. You can do just about anything “extensively”… what we are talking about is extensive threshold or extensive sweet spot. Either way, extending TTE is the goal of extensive work.

Intensive means working at powers above threshold for necessarily shorter time periods. This could be 4x8s or 5x5s or it could be over/unders … it could be a lot of things. The focus is not extending TIZ; it’s doing more power.

As I interpret things, WKO shows extensive being at or below threshold - you look at the power it suggests and the zones and it says “FTP”.

@RONDAL I listen to Kolie’s podcasts usually multiple times. I recall in the most recent discussion about extensive work and why 2x20 isn’t enough, he specifically mentioned doing extensive threshold progressions, and also mentioned “or sweet spot if you’re one of those guys” (paraphrasing). My understanding of his extensive work is 95-97% extending interval time out to 55-60min total (or more!) and then evaluating what comes next for the athlete. Often he will see an FTP increase during that time for newer athletes, and that will reset TTE to start a new extensive progression.

He also specifically mentioned using sweet spot during racing season as it incurs less fatigue and allows you to maintain TTE without incurring as much fatigue when doing hard race or race prep efforts as well.

I don’t intend to put words in anyone’s mouth with this stuff, that’s my interpretation.

I’ve done extensive sweet spot progressions the last two years and I think they work. I have NOT done as much extensive threshold progression work (at 95-100%) in my past.

My long work is generally low power right now, and I like the balance of working a bit harder on my hard days by progressing at threshold. Thus far, I’m recovering well and responding to the training.

One consideration for others is how much time you have. Some people can’t ride 2hrs during the week, which makes a 3x30 at 90% a non-starter if they’re also doing long stuff on the weekend.

As I started adding more AeT or tempo work to my long rides, I may drop back to a SST progression to manage fatigue. We’ll see. It may be that I don’t need to do that. I’ve got a good feel for my threshold and I’m not yet feeling cooked from conservatively pushing threshold TIZ while more aggressively pushing overall saddle time.

Back to WKO - this type of training is off the PDC model’s radar as far as I know. One thing I do is have torque displayed for quick review after all rides. And low-intensity training adaptations - I get better results from doing a Kolie Moore Aerobic TIS moving average on my Garmin aerobic scores than I do on my WKO Aerobic TIS scores (even when PDC is well fed).

Re: low cadence work, there are a lot of different takes on it, from people who prescribe it every single week at varying intensity to those who eschew it almost entirely (KM would be one from what I have read and heard). I have low cadence tempo planned in my next block… so we’ll see.

Kolie’s aerobic and anaerobic impulse charts are brilliant, IMHO, particularly useful with long history of training to look at.

I’m a fan of stuff that works. For whatever reason, low cadence climbing works for me and produces results

I am spending a lot more time at <80rpm than in past years, largely because torque generation is a weakness of mine, whereas leg speed is generally a strength.

For many of my athletes, leg speed is more limiting, so I focus on speed work for them. I do a lot of leg speed stuff in my warmups with the occasional ramp or spin up session as well.

largely because torque generation is a weakness of mine

have you thought about addressing this through strength work in the gym?

Of course I have, I lift twice a week. Raw strength isn’t much of an issue. I have in my past repped front squats at 255 and a 405 deadlift at 155lbs. My riding style has always been higher cadence. I don’t have much need to generate large torque… it’s a weakness, not a limiter.

Nice.
Strength aside might also want to look at some explosive work in gym if you’re doing it already to supplement bike.
Any jumping, box jump, drop jumps, etc will help the bike work.

It’s not a limiter for me. I’ll worry more about it when it is.

Unlike slow climbing on a mountain bike, on the road I would think that torque generation isn’t an issue for many. Except perhaps sprinting, but that’s more about having a strong PCr energy system and some fast glycolytic energy.

During winter base training it only takes me 3-4 weeks to get comfortable extending my useable cadence range from 50rpm to 95rpm.

Except perhaps sprinting, but that’s more about having a strong PCr energy system and some fast glycolytic energy.

That and actually being able to coordinate the movement. It’s always interesting watching some people try to sprint and just the lack of coordination to do it. Similar to a golf swing.

My sprint is decent for a skinny 45 year old. I’m not planning to win bunch sprints, but I have snap and good enough peak power to hold my own in Cat 2/3 bunch sprints against younger guys. Hence I’m not worried about the strength/torque… I do strength train, but any low cadence stuff is more about power though a complete circle, muscular endurance, etc.

My low cadence training, when done long enough, say 2-4 hours in a session about once a month, usually results in improved efficiency factor within 2 weeks. Probably some other stuff too but that one I can clearly measure. No idea why it works, just know that there has been and continues to be a clear dose/response.

any low cadence stuff is more about power though a complete circle, muscular endurance, etc.

and right on queue, even though its only been 5 days, resting heart rate dropped again to lowest I’ve ever recorded. I don’t do a lot of low cadence work, but doing it on longer climbs is when it seems to deliver the best adaptations. I have some guesses but its just that, guesses based on the observation I can climb for hours with a stable HR (around my field estimated aerobic threshold) while holding a relatively high torque.

This morning listened to Tom Bell on That Triathlon Show podcast (Scientific Triathlon), and once again the low cadence discussion turned to athlete anecdotes (‘works for some’) as there is no clear evidence from studies.