Sonya Looney is no stranger to being on the bike for long hours, but the 2015 WEMBO 24-Hour World Champion admits she could barely get through an hour-long indoor workout in the past. Structured training with TrainerRoad and the Wahoo KICKR changed that.

“I can now ride my bike inside and it doesn’t feel like I’m making a sacrifice,” Looney shared. If her modernist views on indoor training don’t set Looney apart from the mountain bike racers she competes against, it’s her genuine preference for epically long and challenging outdoor races.

You see, Sonya Looney isn’t your average professional mountain bike racer. She is an ultra-endurance rider who seeks out intensely difficult single- and multi-day stage races around the world and competes in the most challenging 24-hour events the World Endurance Mountain Bike Organization has to offer.

For an adventure-seeking rider like Looney, her reverent relationship with indoor training might come as a surprise, but it shouldn’t. Sonya likes to win, and after recovering from a couple frustrating injuries she turned to indoor training with TrainerRoad to help her get stronger than ever. Incorporating structure into her training is what she largely credits her 2015 Trans Andes stage race to.

The Trans Andes Challenge is a six-day, 228-mile mountain bike stage race that takes place in the northern Patagonia region of Chile. As much as the race is scenic, it’s equally grueling for riders to complete.

Riding around volcanoes and taking in epic mountainous views is what mountain bike racers’ dreams are made of, but that doesn’t take away from the serious physical demands this race requires. Dauntingly steep climbs required Looney to put out a ton of power — power she wasn’t sure she was able to give.

Leading up to the race she questioned her fitness because of her newly adopted approach to training. The British Columbia resident explained, “I was nervous going into the race because my preparation for it was very different than years before. My training was almost exclusively done on the trainer using TrainerRoad. I wasn’t really sure what the results were going to be because it was an unknown.” 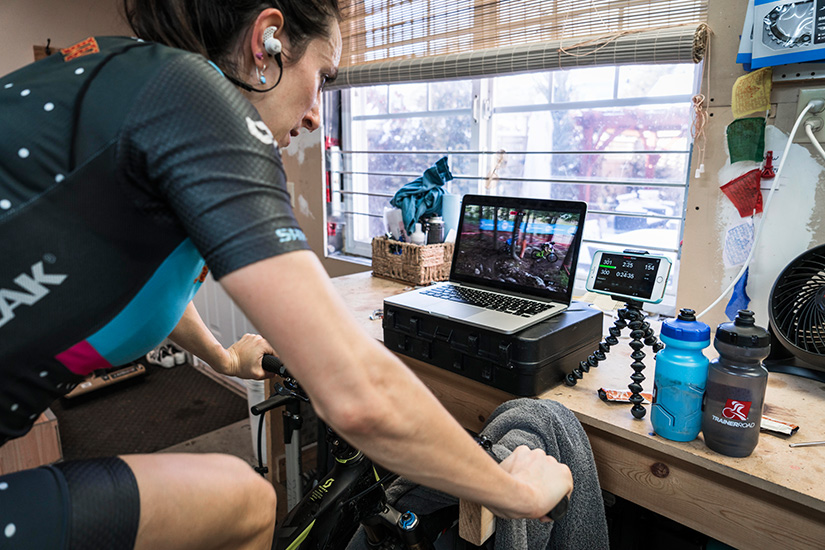 “I can now ride my bike inside and it doesn’t feel like I’m making a sacrifice.”

Looney’s uncertainty almost caused her to back out of the Trans Andes Challenge at the last minute. Ultimately she chose otherwise and decided to compete. To her surprise (not ours), she showed up on race day stronger and more capable than ever to take home an epic win.