Getting a "Not recommended" ride in Training Plan

Just went ahead and did it, it was fine. Maybe robot coach knows best after all!

I’m noticing the same thing. Baird +5 after five weeks of ss/threshold workouts. There’s a week of recovery between then and now. Support suggested I may be ready for it after my recovery week or that it may adapt when I get closer.

Yes…others experienced that. It adjusted on the morning of it so be ready for anything! Actually, there should be a ramp test there, according to support, but they didn’t seem ready to fix it given there was a ramp test scheduled 2 weeks later anyway.

The issue is still there. The training scheduled for today is labeled as “not recommended”. 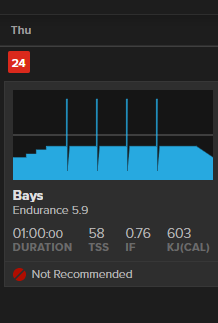 There is no adaptation pending, and even no option to select an alternate… 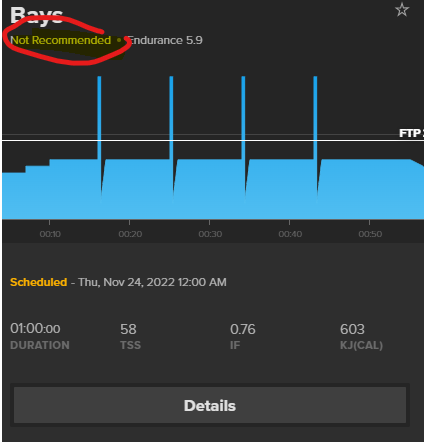 The training makes sense, but it just creates a lack of trust in the Software…

I have Bays in today as well, during my rest week (one of the Tri base plans I think) and it’s not adapted out despite being marked as breakthrough.

In the past I don’t think I have seen adaptations in recovery weeks, usually they are set low PL workouts for recovery purposes, so it doesn’t make sense to adapt them upwards normally and they get left as default. Maybe that’s what’s causing it? Worth asking support.

I can see alternates though - I am probably going to do Pettit +1 or Mokelumne instead (fairly similar just with 2 sprints instead of 4), or Cheaha (3 sprints). That sounds like a bug?

I can get through Bays, it doesn’t look that hard - I think many people are likely to have relatively low PLs for Endurance in TR if, like me, you tend to do your longer rides outdoors. However I’ve just had a cold and I will have done an hour of cycle commuting before I start so the sub seems reasonable…

@ThomasCologne, we recently made an update to the plan you’re using that addresses this!
It looks like that change was applied to your plan so you shouldn’t encounter this again. If you do, be sure to let me know, otherwise you’re all set!

@bobmcstuff, we need to update your plan to make sure the updates are applied throughout the remainder of your Half Distance Triathlon training. I’ll DM you to walk you through that, or I’ll be happy to just apply that update for you! Message incoming.