I’m after a new tablet (+ suitable handlebar mount) for a device that’ll only be used on a trainer bike. As it’s a dedicated trainer bike, the mount will remain attached permanently.

). NB I run TR on a separate Pixel phone, so the tablet’s not needed for that job.

for the past few years, which can still handle much of the video watching task, although the screen size is pretty small. It’s no good for running any training apps with graphics demands though.

I’ve never owned an Apple device, but by all accounts it seems like an iPad of some sort is probably the best option, and on this front I see there’s new stuff being/been launched.

Budget is flexible - I’ll spend as required to get something that’ll do a quality job and have some longevity. I’l rarely use this tablet for anything other than this trainer job, so it’s probably not financially prudent to an spend an absolute fortune on it, but as mentioned I do like stuff do last and give me a decent lifetime from them. One thing I’m unsure about is screen size. Bigger is very likely better, but really big gets spendy and I also wonder about bar mounting for very large devices.

NB I’ve ruled out getting a TV/Apple TV combo, as I want touchscreen controls immediately to hand - this seems to work well - rather than fiddling with a remote of some sort.

Input appreciated! Also, I’m in the UK, which may be relevant for the mounting options.

As an adroind fan boi, i highly recomend the ipad.

iPad delivers amazing capability and versatility, with a 10.2-inch Retina display, A12 Bionic, and iPadOS. 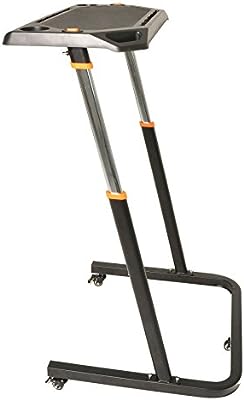 Some existing threads worth a look:

(1) Which iPad model though?

Comparing the specs, the new (available next month) 10.9" iPad Air 64Gb seems a decent balance between screen size/quality and future-proofed grunt. Not worth paying up for the forthcoming Pro, perhaps even not worth paying the extra for the Air over the new 2020 iPad 10.2" but the fractionally better screen, storage and grunt of the new Air (both aiding longevity) maybe justifies it.

‍
(2) The new 10.9" iPad Air would, I believe, also fit into the “Tacx Handlebar Mount for iPads and Tablets”, which seems like a solid option unless someone has a better alternative?

NB I don’t have space for a trainer desk like the one mentioned by @Joelrivera .
‍

(3) One other thing: To use my existing wired headphones with an iPad Air, presumably I’d need a USB-C/3.5mm adaptor for the iPad Air. Otherwise, switch to using Bluetooth earphones of some sort…

…any recommendations for those, which work well on a turbo? TIA

If you have the money to splurge, go for the ipad air.
Its a very nice tablet.
I personally would go for the ipad 10.2, its less expensive and it should last 4-5 years. The Air might last an extra year or 2, but you will be ahead with the savings.

The one thing i like if the air: Apple is using USB-C.
USB-C cables and adapters are cheaper than apple cables (plus you seem to be an android person, so having all USB-C is nice)

The USB-C to 3.5 mm Headphone Jack Adapter lets you connect a standard 3.5 mm audio plug to your USB-C devices. Perfect for headphones or speakers.

I dont listen to music on the trainer, so i dont have a recommendation for headphones. But a generic $20 BT headphones will work just fine. Just make sure they are sweat resistant.