I have been looking at how my Kickr power compared to my Vector, there is a whole tread dedicated to this. in this exploration i have discovered that my various Garmin devices appear to have a lot of random drop outs when recording. I initially thought this was coming from the Vector 2s, but now see that both my Edge 520 and Fenix 5X are recording drop-outs and therefor giving me different power results at the end of a ride.
below it he power and cadence file from the Fenix 5x

here is the same workout recorded on TrainerRoad

I have done a factory reset on the Fenix and still see the drop-outs, is the TR software smoothing out these drops, or should I be investigating this with Garmin? on the outdoor rides I have already seen a 30 TSS difference between my watch and edge head unit on a single ride with very different NP / AP / TE values.

Has anyone had any similar experiences? is this just a ANT+ vs Bluetooth connection issue? (TR connects via BT, the Garmins are connected via ANT+)

I was having the same issues with my Garmin cadence monitor and speed pod thing but not with my Kickr HRM. This seems to have been solved recently and the App works fine for me now. It never happened when i used my laptop with Dongle. there is talk in another thread of an update to an update that fixed the problem. Still cost me $ in replacing my Garmin Cadence / Speed monitors that i guessed were pooched but probably weren’t. I think it was the App but it’s fixed now for me at least.

I’m getting drop outs too. I emailed Garmin and they kind of passed the buck saying it was probably my power meter. But after going back and reviewing the data, I’m seeing that I was loosing heart rate date at the exact same time. My unit is a 520 Plus, running Varia Radar, Power Meter, HR monitor, and phone. Maybe too many devices connected at once.

I have had power display dropouts on TR from my Vector3s repeatedly, usually once every few weeks. It’s frustrating, to be sure. TrainerRoad blames Garmin. I’m not sure how that holds water, frankly, considering the Vectors report via ANT+ to my Elemnt Bolt just fine, and the controlling power is still present when using power match. It appears to be just a display issue.

I have no issues any longer with my Vector3s on the road or with any other device or program. Just TR. That’s why I can’t buy that it’s a Garmin issue. Below is an example. 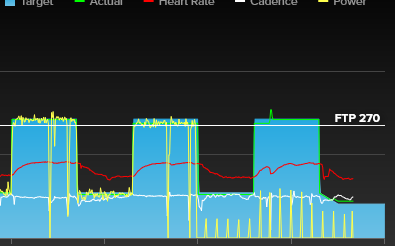 The long drops are backpedals, but the series of spikes is the long dropout of display power. Control power was fine via powermatch. I mitigate this by running my Elemnt Bolt in parallel with my workouts now, but that’s kind of a pain.

Anyone had similiar issues?

on the outdoor rides I have already seen a 30 TSS difference between my watch and edge head unit on a single ride with very different NP / AP / TE values.

As for your dropouts… If both your 520 and Fenix are seeing the same dropouts, then the problem would most likely be the source aka Vectors.

Are you using a USB extension cable w/your ANT+ dongle?

No, the Vectors are connected to TR via BLE. I run the Bolt separately via ANT as a back up right now. I’ve thought that it was Bluetooth interference, and maybe it is, but I’ve gotten this same issue when pairing with the iPhone or an iPad or running both side by side, in my garage with nothing else but my headphones around and in my office with Bluetooth flying all over the place. It’s just really, really odd. Only happens once every few weeks, so I kind of just live with it for now.

I’ve thought that it was Bluetooth interference, and maybe it is, but I’ve gotten this same issue when pairing with the iPhone or an iPad or running both side by side,

Did you mean to say that you do not get this issue when running on the iPhone or iPad?

If running via BLE on your laptop, it could be any number of things (e.g., distance to laptop, Bluetooth chip, antennae design, WiFi interference, etc…) In my case, I found that using Bluetooth on my laptop worked most of the time, but still prone to fits. ANT+ on the laptop w/USB extension has been 100%.

Try moving your wifi channel to 1, 6, or 11 if on 2.4GHz wifi. And if you can, switch to 5GHz wifi which will help eliminate more interference since Bluetooth and uses the same 2.4GHz frequency band as 2.4GHz wifi.

I get it running TR on both my iPad and iPhone via BLE.

ANT+ is more relaible, I think. I might start running it via my desktop with an ANT+ dongle, but right now my cave setup isn’t conducive to that. Don’t own a useful laptop for this purpose, though I may get one soon.

I’m getting drop outs too. I emailed Garmin and they kind of passed the buck saying it was probably my power meter. But after going back and reviewing the data, I’m seeing that I was loosing heart rate date at the exact same time. My unit is a 520 Plus, running Varia Radar, Power Meter, HR monitor, and phone. Maybe too many devices connected at once.

The simultaneous dropout issue is a common problem with the 520 Plus since upgrading to the 4.00 firmware. I contacted Garmin support earlier this week on this issue, who advised a reinstall of the firmware via Webupdater - I’ve yet to see if this resolves the issue.

Good to know! I’ll update tonight and see how it goes.

Thanks, i think the vectors give a few drop outs, but the 520 is more of the issue. don’t think it is picking up as often as it should be…

I was led to believe that BLE had a higher refresh rate - sent more data more often - making it a better source that ANT+? was also thinking that part of the frustration would be from Vectors that only transmit in ANT+ vs the Kickr that was BLE

I don’t know. All I know is that my Elemnt stays connected via ANT+ with no dropouts of display power when TR (via BLE) display power drops out, but control power is still present.

TR support also told me to try connecting my Vectors to the Kickr via ANT+, then using Wahoo’s control power with power meter feature, connecting the Kickr to TR via BLE. They said many users have more luck with that for whatever reason.

This. I was getting a ton of dropouts recently out of the blue after having had none before. I realized I has switched to my bike with the newer quarq on it that has blue tooth. After struggling to find a solution, I disabled all Bluetooth on my garmin 520 plus and went back to ant+ only and no more issues on. My older bike which has a non Bluetooth quarq never had issues. ANT+ for me.

I seem to recall reading that for some sensors the fenix5 simply isn’t sensitive enough due to restrictions around the antenna design. I think it first came to light with either the Garmin rear wheel speed sensor or maybe one of the new HRMs.

I went through the process with Garmin’s support, and they ended up having me delete some folders from my 520, then re-sync. I rode for about two hours without any dropouts. That being said, I was not using Varia Radar for these rides, because they were on a closed bike only course. I’m going to be riding about seven hours next weekend, with the Varia radar, let’s see if I’m really in the clear. If it seems to work, I’ll post the instructions from Garmin on what folders to clear. As always, YMMV.

massive drop out after 10 min, the reading from the edge was not much better, but had drop outs in completely different places. do i give up on Garmin and look at an alternative bike computer? is the Wahoo Element a better option?

Two different Garmin devices both having problems over ANT+ to the same power meter. I would suspect the power meter is the problem rather than two separate Garmin devices. Have you tried changing the battery in the Quarq? If that isn’t the solution, I would contact Quarq support.

the power meter is brand new and the app is showing battery at 85% could it be something else? I have been getting consistent drop outs on the Garmin devices from the kickr power too, so leaning towards an issue with the Garmins…