Kaweah. Hurt more than I expected. Just felt hard to keep my cadence high. But I got on the bike right after waking up with no coffee or food. Did take in 125 grams carbs during the ride

Haha yes spencer+2 is a brute !

Kennedy Peak today, not too bad 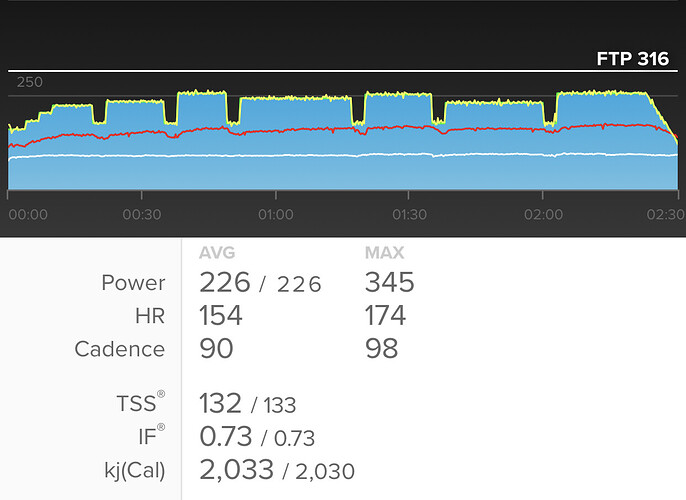 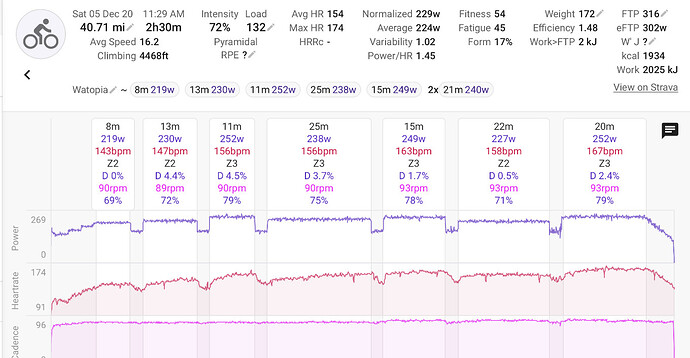 Warlow for me today: 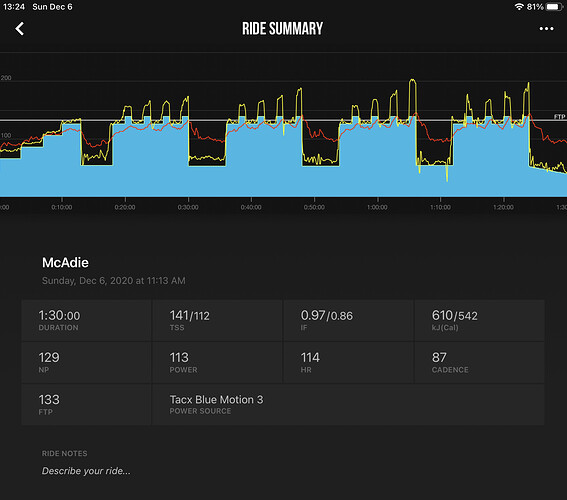 My last post in this thread was all “pat on my own back”, so in fairness, time to share one where I fell on my face.

I’ve been cruising along and really pleased with how I was doing w SSBMV-I. I even had the hubris to wonder if my FTP should be set higher. Hah!!!

And then the wheels came off the wagon. I had Palisade queued up yesterday, but bailed after the warmup when I felt it wasn’t in the cards. Today I tried again and while a little better, it just wasn’t meant to be.

I’ve had to juggle some workouts and shift things around, but I was on a roll and managed my last VO2 just fine. But that was then and this is now. Anyway, it’s very humbling and illuminating to see how the body calls the shots, regardless of what’s up in my plan. Fortunately, I have some wiggle room in my plan, so I have options here to regroup for another go at Palisade before moving on. Onward!

Wright Peak -1, biggest TSS workout of SSB1 HV and totally nailed it, barely hitting 160 during the last couple of mins. As a bit of backstory, I had started the phase with an increased ftp of 305 (from 295) just to see how I could handle slightly more difficult stuff.

Got along fine for a couple of weeks but as intervals got longer I backed off to 300 and eventually back to 295 so I didn’t bite off more than I could chew (the workouts were more plain hard vs hard but totally doable). So this one was super easy at 295w ftp. Tomorrow is 4x20 @ 90%, which should be easy enough as well. I might give 300w a go to start off SSB2 but we’ll see! 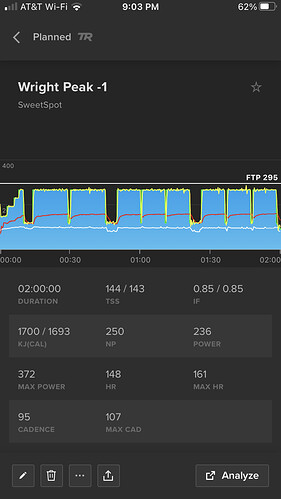 That was actually quite a bit of work - never in doubt, but not particularly pleasant after a good threshold session yesterday. 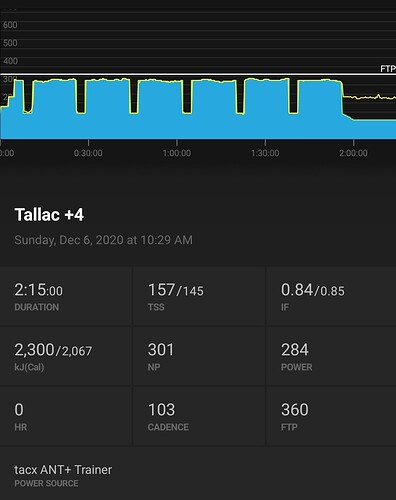 Did Leconte today to finish the 14 weeks of Sweet Spot I & II plus 2 weeks of Build between the phases that plan builder gave me. It was hard. But I’m very happy with the trophies for “All Time” bests on the last 3 “hard” workouts. Gives me a lot of confidence.

I started in September this year for the Tour of Flanders Sportive in April and am far ahead of where I normally am. Hoping to keep that momentum.

Did my favorite group ride on Zwift this morning. Was hoping to get in 90 minutes before the baby woke, and she slept, so I got a solid 2 hours in! Felt surprisingly easier than anticipated.

You assume incorrectly lol And, like Forrest Gump,that’s all I have to say about that lol

Disaster done as part of the Finnish Independence Day.

Now some good food, and maybe a beer as a “recovery drink”.

[image] Disaster done. Was a lot tougher than last year, as my FTP is about 15W higher than a year ago. I had to take breaks even on the VO2 efforts, and I decided to skip most of the sprints of the fireworks. Even though I had to take those breaks, I’m pleased how this went. There has been quite big changes compared to last year (relatively big bump on FTP, new trainer (last year KICKR Snap and now KICKR, which makes it tougher) and so on). But I’m also glad it’s done for this year now. …

Another weekend with a kitchen sink style workout, this one was “Athlete’s choice” and I got to pick what to do. Part of the plan was to feed WKO’s power duration curve, and it wanted a 1-sec max effort, 2-min effort, and a 32-min effort. Instead of a 32-min effort I decided to do a 20-min field test, however legs were a bit sore and I wasn’t feeling fresh. So I called an audible, cut it short at 7+ minutes, and was able to calibrate my FTP for next 20-min field test. Really happy with the 2-min effort. 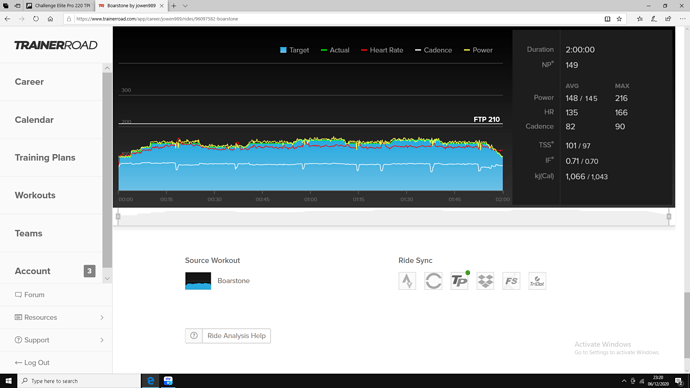 I did Hunter outdoors. My PM crapped out with 2 min remaining in Interval 1, and now I’m not even sure it actually happened… 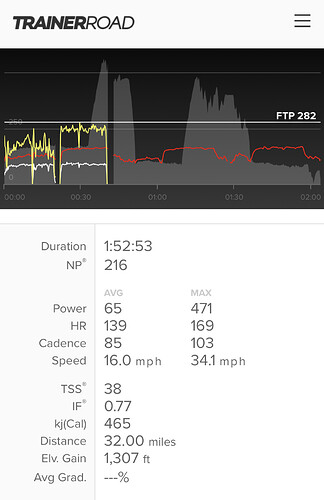 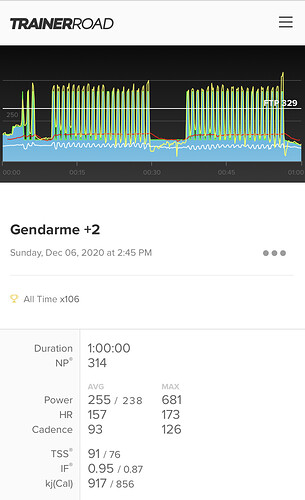 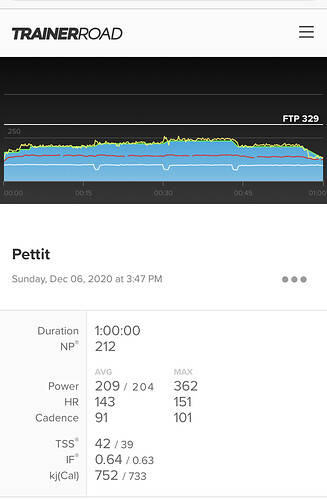 Gendarme +2. Made this the first workout of SSB2MV since i took ramp test Friday. Ended up averaging 140% for the intervals, but maybe should have aimed higher? Not sure if my Hr was sufficiently elevated for the majority of these intervals but there’s plenty of VO2 work ahead so not going to stress over it.

Petit for some endurance immediately after and it super easy after the 140% efforts. 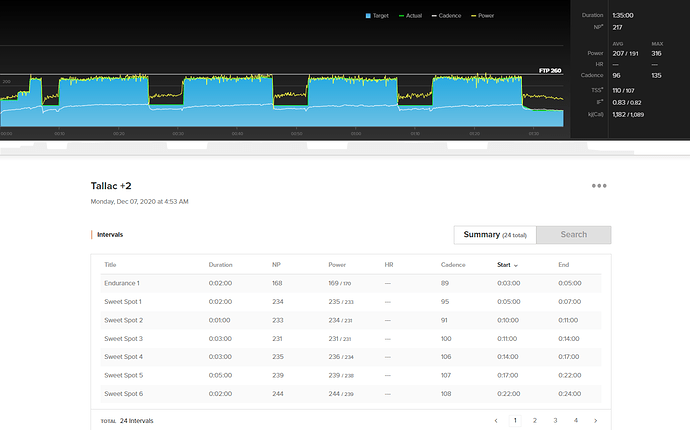