On the next episode of the Ask a Cycling Coach Podcast, we’ll discuss stage race pro tips that Jonathan collected at a UCI stage race, how altitude affects caloric burn, a deep dive to help you understand TSS, and much more! Join us live Thursday, May 9 at 8:00 am Pacific.

Topics covered in this episode:

Listen to previous episodes on SoundCloud

I’ve been adding Taku between Tu / Thu to add a little extra and ‘spin out the kinks’ and it’s really worked out well instead of Pettit. This way, my legs are ready to rock on Thursday. Just a thought for everyone that’s an LV guy, like me, but adding rides as if it’s a MV plan.

@Jonathan for your son - a neighbor gave us a set of pedal blocks when my kids started riding, and they worked great. Search “bicycle pedal blocks” and you’ll quickly find them on Amazon or Walmart or …

@Jonathan @Nate_Pearson @chad I loved the discussion on TSS, CTL, etc. Is the “fitness” score that Strava gives the same as CTL? When I read the Strava glossary it never specifically states their methodology for arriving at this score but after your discussion that seemed to make the most sense. Thanks for another great episode.

Just listened to the podcast. Regarding @Pete’s chain snapping: Would an e-Bike chain maybe be a better solution? They only add 10-20 grams, and are supposed to be a lot stronger. I’m thinking KMC e11, Shimano CN-E8000-11 or Connex 11SE. I don’t know about shifting performance, but it may be worth to test. I assume you can continue using quick links, as that wasn’t the weak link in your case.

I had a few people reach out with helpful suggestions, and it seemed like the favorite was the KMC DLC chains. I picked up a couple, and we’ll see how it goes rolling forward! 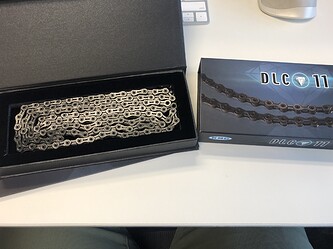 Love those chains, but just fyi the black&pink one is scientifically proven to be the fastest version.

@Jonathan @Nate @chad I loved the discussion on TSS, CTL, etc. Is the “fitness” score that Strava gives the same as CTL? When I read the Strava glossary it never specifically states their methodology for arriving at this score but after your discussion that seemed to make the most sense. Thanks for another great episode.

The Strava score is similar to CTL but not the same. I don’t know everything about it, but I would assume it has the same shortcomings as TSS/CTL.

@Pete @Nate_Pearson Have a couple quick questions for you on those sprint drills Nate described in this episode.

Just a triathlete trying to build some of that burst power for the random crit here and there.

You mentioned washing your kit after each stage without a washing machine in the sink. I bought into a kickstarter campaign for a portable foot powered washer called the Drumi. It washes my kit super fast with very little soap. Only takes a minute or so per cycle. My 4 year old daughter likes to step on the pedal to help me out. I like extra rinses just to make sure I remove the soap. P.S. I don’t work for company, I just like the product. https://www.yirego.com/ love the pod casts. 5 stars as usual.