Is there a good resource somewhere with pictures correlating power curve shape with strengths or discipline? Last week’s podcast contained some discussion about how the hosts’ power curves appeared correlated with certain strengths such as sprinting or TT, but were not dispositive of ability. I recall a while backJonathan once describing a power curve as a hockey stick shape. Mine is not shaped like a hockey stick. It looks more like this: 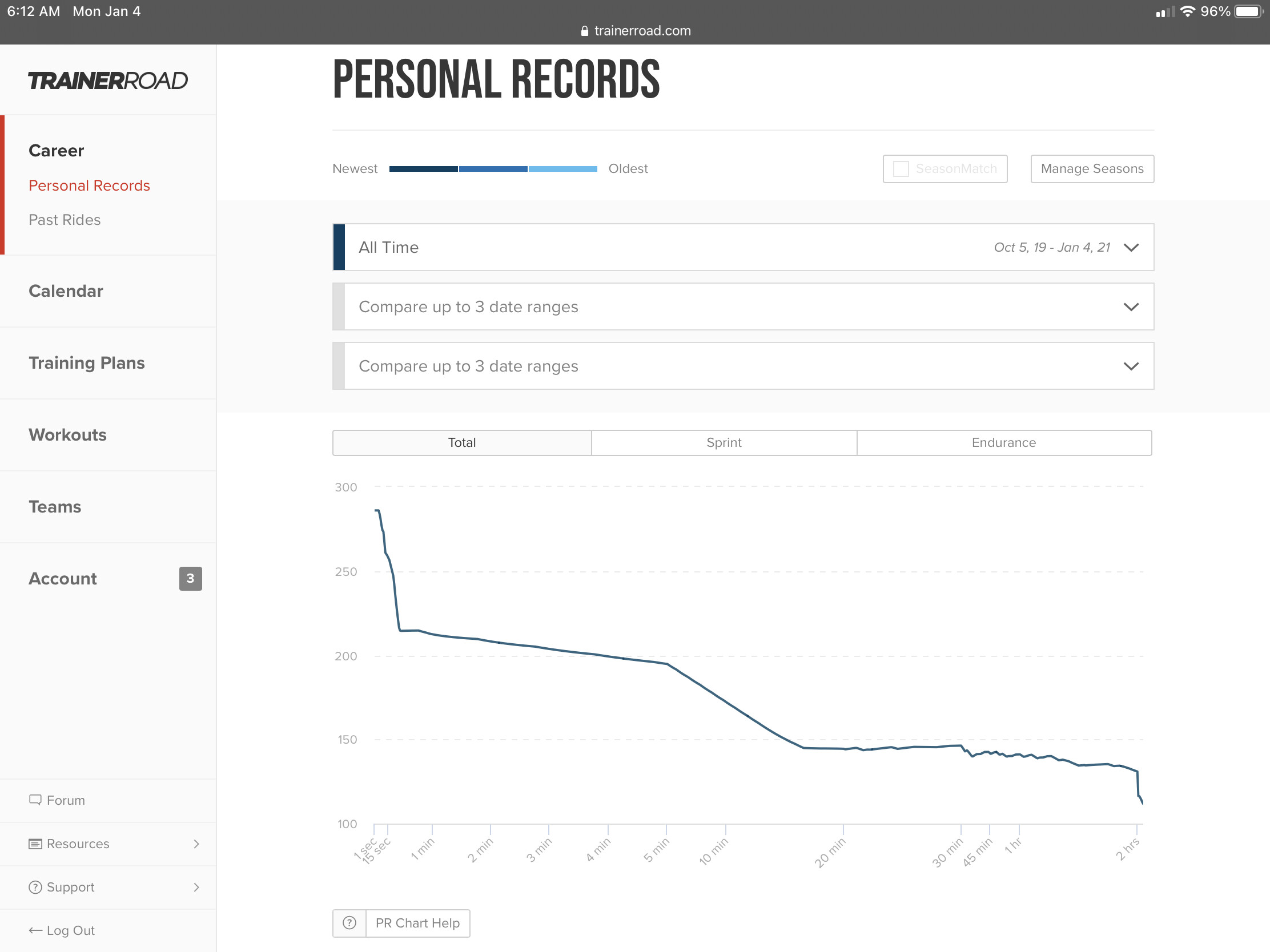 Is there something somewhere that could tell me what type of riding correlates with a power curve shaped like this?

Intervals.icu is free and handy. Requires connection via Strava or Garmin Connect to get your data, but when you do, you get access to charts like this, with age and gender filters. 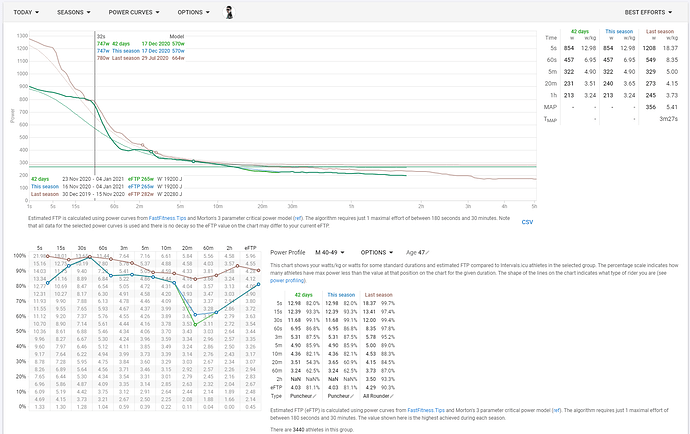 Thank you, Chad! I will look into intervals icu.

Hey there! I’m working on a blog post right now about power curves (posting up later on this week) but the key point is that your power curve only reflects what you’ve done, not what you’re capable of. The particular shape of yours likely reflects the specific efforts you’ve tackled in training, rather than the actual contours of your abilities. Sudden peaks and valleys correlate with the specific lengths and intensities of intervals, and it’s doubtful that every point in your curve represents your maximal capacity for that time interval.

Check out a couple other blog posts we have on this:

How to Use Your Cycling Power Curve to Find Your Strengths and Weaknesses -...

Every cyclist has strengths and weaknesses. How do you use a cycling power curve to discover what you're good at, what needs work, and what can you do with that information?

How to Use SeasonMatch to Compare PRs - TrainerRoad Blog

Using SeasonMatch to compare PRs gives you proof your training is working every step along the way, rather than waiting for your peak.

I was surprised when Jonathon mentioned the PDC looking like a hockey stick. I’m used to looking at WKO where the time scale at the beginning (1-60 seconds) is stretched out more.

Is there something somewhere that could tell me what type of riding correlates with a power curve shaped like this?

it looks like all (or nearly all) of your TR data is from indoor rides on the trainer.

The particular shape of yours likely reflects the specific efforts you’ve tackled in training, rather than the actual contours of your abilities.

Ah ha— Maybe I should put a power meter on my MTB. I was wondering why we didn’t all have basically the same power curve if we all did ssb then build of some sort. Lol.

I’m bad at math and physics and science… numbers basically.

I got you covered on numbers LOL.

So if the data in your power curve is only from TR workouts, and you use erg mode, the only max efforts are from ramp tests. The ramp test is a max aerobic effort and roughly corresponds to a best effort at somewhere between 3-5 minutes on your power curve.

Feeding that same into intervals.icu won’t really tell you anything. Putting a power meter on the MTB would give your power curve a lot more interesting data…

You’re awesome, @bbarrera! I think I am starting to understand. I was confused because I misunderstood the blog posts and podcasts to suggest that the TR training power curve (just from the TR plan rides) was somehow useful for finding strengths and weaknesses. And since mine didn’t look like a hockey stick, I thought maybe mine suggested I should just drive a car. Lol. Thank you for the explanation.

No cars, stay on the bike! Hard to draw conclusions with only indoor training data, where your only max effort is likely the ramp test (and its a max effort at only one spot on your power curve).

That is just presentation. The graph you show here has the first minute stretched out, that is why it does not drop as fast.

Yep everyone else covered it already, but pretty clear various parts on the curve aren’t maximal. By eyeballing it, your max 5 min power is only about 10% lower than your max 15 sec power.

I’m not a good sprinter, but can only imagine how cool it’d be being able to do for 5 mins, almost what I can do for 15 seconds

If you were inclined, you could deliberately fill in these points in the curve. There’s a few power test workouts in the library if you wanted a template to follow, but best to do them in resistance mode.