Anyone using a smartwatch for outside workouts?

Looking to jump into outside training and just received my power meter pedals.
I don’t have any unit to display power for workouts outside.
I have been thinking of getting a smartwatch for a while and it seems that workouts can be loaded on the garmin watches.
Does anyone have any experience with this? I do little riding outside at this time so I don’t really want to invest in a fancy head unit…but maybe I should just get the wahoo bolt.
Thanks.

A couple of options come to mind, depending on what you’re doing outside and what you want out of your workout.
The most obvious would be to load the workouts to your watch and go by RPE rather than power. If you don’t want to spend the money on a head unit, there are also a couple of smartphone apps which are able to display power (I think the wahoo app does, off the top of my head?). You’d have to program the workouts manually and the workouts wouldn’t integrate as nicely with the TR calendar, but it does the job and most smartphone mounts are pretty inexpensive.

If you’re doing mostly endurance/tempo riding outdoors, or max efforts where you’re not as focused on hitting a specific wattages, I think the watch is probably the simplest/best option. For workouts where your target range is a little more narrow, or if you just want a record of your performance, a smartphone is a workable solution, if a little clunky. (that being said, I think indoors is still the gold standard for those sorts of efforts anyway.)

You can definitely get by with a smartwatch if you only want or can afford one device. I just have a Garmin 935, but I’m a triathlete so I use it for everything. I haven’t used it for outdoor bike workouts (I’ve done run workouts with it), but the obvious major disadvantage compared to a dedicated cycling head unit is the screen size. When I ride my tri bike I keep it on my wrist since I can see it pretty easily riding in the aerobars, but on my road bike I just strap it to my handlebars since it’s hard to see on my wrist riding on the hoods or drops.

One thing to keep in mind when shopping for smart watches: lots of the entry level ones (Garmin Vivoactive) don’t read power meters. They physically can since it’s a standard bluetooth or ANT+ connection but the manufacturer lock it out in the software to get people to buy higher models. So make sure it is compatible before buying. Their may be 3rd party apps to go around this. DCRainmaker’s website is a great resource for tech info on all bike gadgets.

Unless you really need a training watch for running or something I’d get the cheapest Garmin or Wahoo that has the features you need.

Personally I’d miss the out front display of a headunit and turning your wrist to look at your watch while cycling sounds annoying.

I use a Garmin Vivoactive 3 outside. You can push outside workouts to it. It isn’t the best situation because you can’t see the intervals, but it tells you what to do in text. Most of the stuff I’m doing outside is longish intervals anyway, so it works for me.

I have the same watch and use it for all my outdoor rides/runs. I don’t have a power meter, though, is there an IQ app that allows the watch to measure power data?

I’m just training with RPE on my mountain bike outside so I never have looked.

Like @SteveM said, I use my Forerunner 945 occasionally and it is great for workouts with less varied structure. It gets tricky with something like reduced amplitude billats where the intervals are 15-30 seconds long due to the pop-up description that shows the interval description. For those more variable workouts, a head unit is a better experience.

You can mount your watch on your bike for easier reading using something like in the link below. I agree that a head unit definitely makes things easier but is not absolutely necessary if on a tight budget. 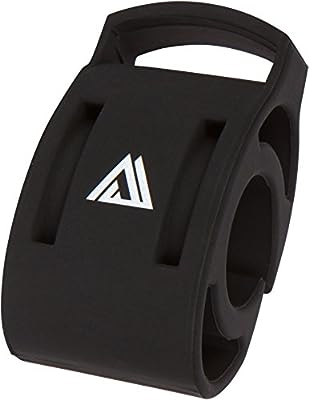 I had an Apple Watch Series 3, and they were absolutely perfect for training. All training sessions were recorded and calories burned were shown. I care about my health. I go to the gym and eat right. This is why smartwatches help me count calories, monitor my breathing and pulse, and let me know if something is wrong in my body. I read the review here findyoursmartwatch.com and chose Xiaomi Amazfit Biz Review final comparison. This service is really very useful if you’re thinking about a purchase.

Not sure if this applies to any of Garmin’s more Triathlon-oriented watches, but I hit a small snag using my Garmin Forerunner 35 to track rides - namely that when the ride syncs from GC into TR, you don’t get the Elevation data (though as a workaround, you can export the .fit file from GC and manually import into TR). I spoke to the Support folks and it has something to do with elevation correction being enabled on the Forerunner (not that I can change that…).

Late to the party, I know. I use the Fenix 5 for outside workouts and it works just fine.

I have a Garmin 935 and just yesterday I tried using for outdoor workout. But I was a little confused as to how the target screen works. Are there any guides on the experience when using a watch? As in, it was showing me in the green zone but I felt like I was no where near producing the power required.