TrainerRoad 2.3.0 is out, get it at www.trainerroad.com/install.

Here’s what’s new in a nutshell.

This isn’t a major feature update but there has been a lot of work put into it.

We’ve collapsed devices when they aren’t paired.  This makes it easier to see what’s available and what you have paired. 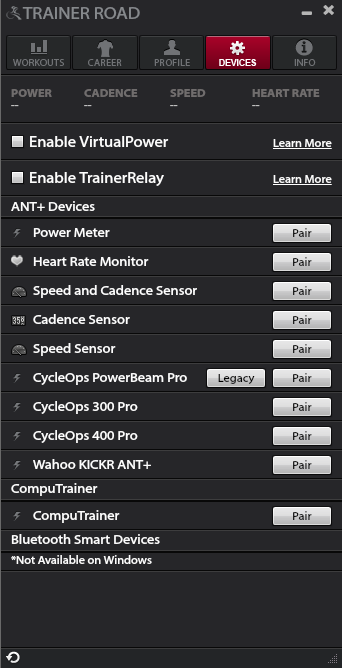 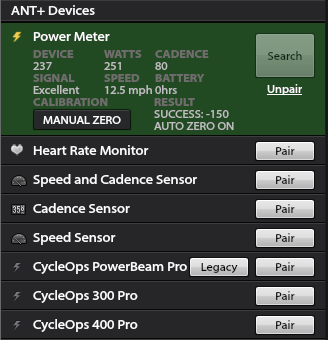 So, what does zeroing do?

You can think of zeroing your power meter like hitting “tare” on a normal kitchen scale.  Your power meter is full of super sensitive strain gauges.  We want to tell your power meter that it currently doesn’t have any load on it, and that it should use this as it’s “zero” point when measuring load.

When do I want to do it?

We’ve added and improved roll down support for the Kinetic inRide, Wahoo Kickr and CycleOps Power Beam Pro.  Here’s how it works.  We’ve added a spin down button when the devices are paired. 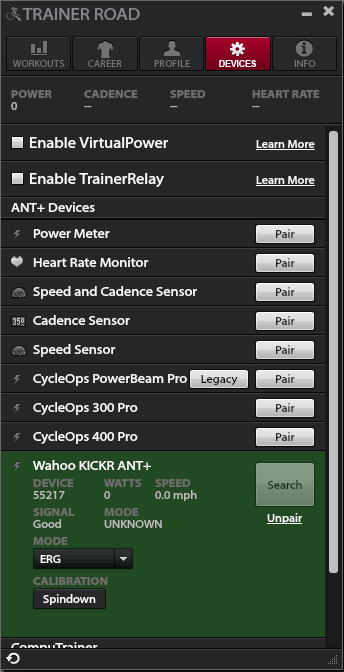 To initiate spindown calibration, just click the “spindown” button or push “c” on the keyboard.  The app will start the calibration process with your trainer.  Then just hop on your bike and follow the instructions.

Once the trainer is calibration mode spin up to the target speed.  In the second screen shot below you can see that you need to spin up to a speed greater than 22.3 mph (it will show kph if that’s what you have in your profile) when on the Wahoo Kickr. 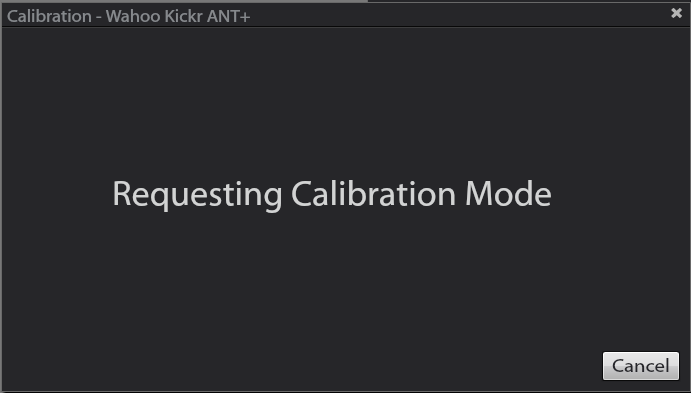 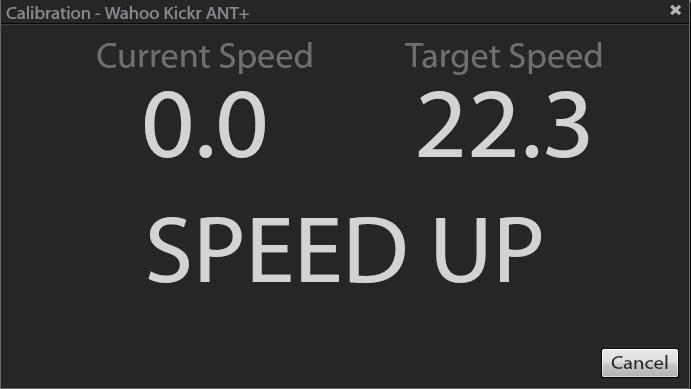 After you’ve hit the target speed the instructions will change and tell you to coast.  Stop pedaling and let your trainer spin down. 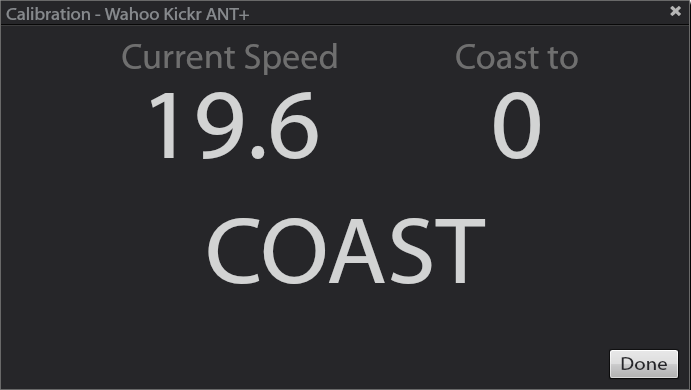 Once the spin down is complete your trainer is calibrated and ready to go.  Just click done and get one with your workout.  If your calibration isn’t successful you might need to change your tire tension.  This is most common with the inRide and TrainerRoad will tell you to increase or decrease tension. 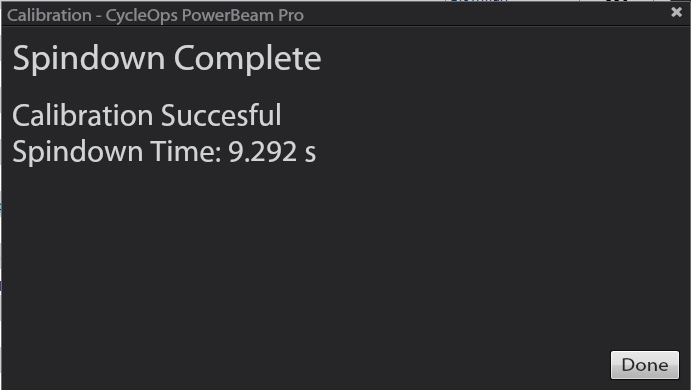 The power beam pro is a bit different.  It requires you to warm up your tire before you do the roll down calibration.  Once it’s connected it will tell you to maintain a speed range for two minutes.  They do this because the change in heat on the tire can affect your roll down time.

I don’t think you need to calibrate the Power Beam Pro every time if you keep your tire pressure and tire tension the same, and you also stay in a room that’s about the same temperature every time.  Personally, I would do this maybe once a week.  Although you can certainly do it before every ride.  It only takes two minutes. 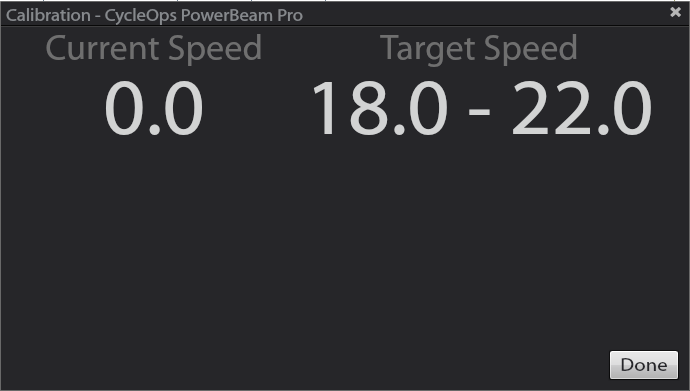 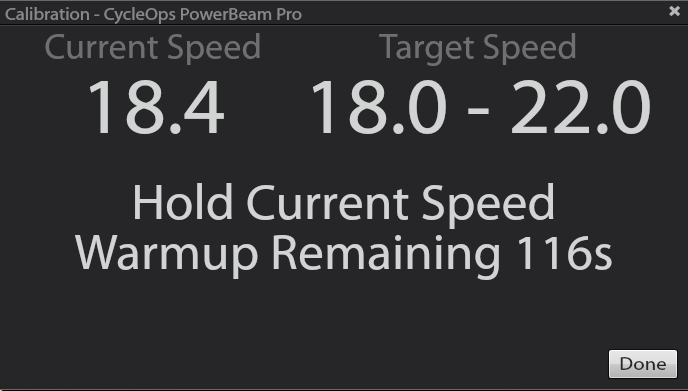 How often should I calibrate?

I’m using a Wahoo Kickr right now and I calibrate once every week or so.  I’ve found that the Kickr stays very consistent.  My calibration numbers are always around 419.  That’s telling me that my Kickr is staying calibrated day in and day out.  Wahoo Fitness tells us that you only really need to calibrate your Kickr the first time you get it, then again if there is a large temperature change or you let it sit for a long time.

For the Kinetic inRide and Power Beam Pro I might calibrate every ride.  That’s because there are a couple more variables in the equation (tire, air pressure, and wheel pressure).  If you can keep those consistent you might be able to get away with it more often.

How do I calibrate during a ride?

We’ve added a Spindown button to the main workout window.  You can also push “c” on the keyboard.

Once your calibration is complete the calibration window will automatically close and your workout will start up again.

This is the first step in that process.  We don’t have an ETA for you at this time.

There’s a new device type to pair called “Kinetic inRide”.  You’ll want to use that device type instead of the standard Bluetooth Power Meter.  This allows you to select the pro fly wheel and do roll down calibration. 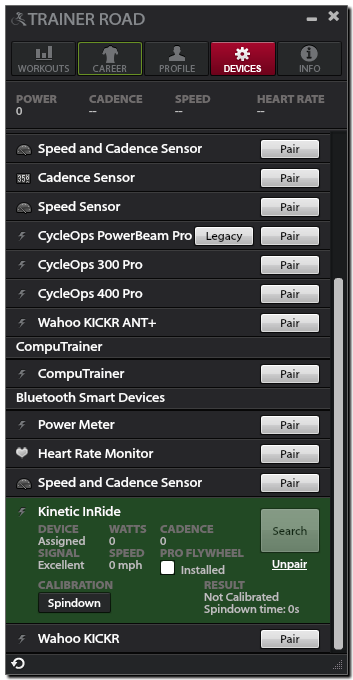 We’ve redone our entire client/server api in our desktop app and workout creator.  We did this for a few reasons.

1) We’ve stripped out our API code from our web server code.  We now have a different set of servers for all client/server interactions.  This should increase performance on the website and allow us to fine tune stuff in the future.

2) We’ve switched to standard HTTPS communication.  We we’re using AMF3 serialization between AIR and .NET, but now we’re just using the standard get/post/put/delete verbs against HTTP.  This is the first step in moving away from AIR/Flash and being able to develop mobile apps.

3) We’ve starting redoing the guts of our website.  We’ll be moving away from Umbraco 4.7 and to ASP.NET MVC4.  This has been in our plans for a while.  MVC4 will allow us to make changes much more quickly and have a much faster, more robust site.

Along with the new code of our website you’ll get a new look and feel to some of the pages.  We’ve been working with a design team to re-do the entire site, but that will be an ongoing process.

Nate Pearson is the co-founder of TrainerRoad. He is a father of two and an avid triathlete and cyclist. His training is fueled by great coffee, BBQ, and pie.

Take Your Training Outside: TrainerRoad Outside Workouts