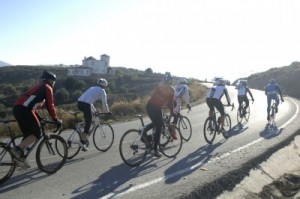 In Part 1 of this post, I offered some advice regarding a few ways to improve your ability to handle your bike while riding all by your lonesome. As promised, this week I’ll offer a few suggestions regarding riding well, i.e. more efficiently, more enjoyably, more safely; while riding with any number of other riders whether rolling along at moderate speeds in a large group on a flat road, descending at high speeds in a strung out line of riders, or fighting to hold a wheel in a paceline of powerful, fast-moving, motivated cyclists.

But before I get to the tips, I’d like to reiterate the necessity of forcing yourself outdoors every once in awhile if for no other reason than to keep these skills fresh but also to break the monotony of indoor training. Because, as a bit of an aside, a brief reminder of what it feels like to play outside can make a substantial impact on your training motivation while indoors. It seldom takes more than one weekend ride with my teammates or riding buddies or just the inclusion of a local Tuesday night race to remind myself not only why I want to be fast but also how good it feels to be fast. It’s not so much a matter of making others suffer – though I won’t deny that particular allure – but more a reminder of how much more interesting, satisfying, fun it is to animate a race as opposed to clinging to the field for dear life because my fitness is inadequate.

With that in mind, here are a few suggestions that I hope will put a different spin (wink, wink) on some of the advice you’ve likely read several times already.

I lump these skills together because if you’re riding in a group it’s very likely you’re responsible for both simultaneously – you’re leading riders at the same time you’re following others. The key here is awareness. Be aware that your actions affect those behind you; be aware of what’s happening not just directly in front of you but also well in front of you, as far ahead as you can see; be aware of road conditions and route changes; and be aware of things like wind direction which will change the flow of your group when your route alters your direction. Without being too specific, just try to stay aware in a general sense, and you can do this best by remaining relaxed both in body & mind.

This awareness should also include an understanding of how costly your actions can be in terms of any following riders’ wellbeing. This is simply to say, try to ride smoothly by maintaining steady speeds, flowing gently through turns, and avoiding any temptation to move laterally or brake, sharply or suddenly.

2. Moving through a Field

If I had to attribute improvement in my pack-riding aptitude to a single maneuver it would be this: move diagonally and put your hips ahead of the rider you’re overtaking. Clearly, you can’t move directly forward in a field unless the riders in front of you part like the Red Sea – not gonna happen. So you can either head to the outskirts of the group and move around their perimeter, and in the process burn off a fair amount of energy, or you can gracefully, patiently, and at a low energy cost move up within the field by moving diagonally forward (and backward should your goal be to rest, eat, get a bottle, etc.) by working until your hips are ahead of the handlebars belonging to the rider you’re overtaking. The rider whose hips are in front of another rider’s handlebars is the rider who controls where both riders go. Once you’re in this position of control, choose your next rider and once again move diagonally in an attempt to place your hips in front of his/her bars. Practice this drill often with the goal of becoming so versed in this maneuver that you’re almost invisible to others, so minimally disruptive that you’re not even noticed moving forward & backward through a group.

When turning in a group, the riders ahead of you are frequently going to dictate where you go, and to a lesser extent, the speed you’ll carry through the turn. When this is the case, simply relax, remain aware, and do your best to follow the line and match the speed of the riders ahead of you. But what happens when you get to lead your group through a turn? In that case, the speed & safety of the group depend on you and how smoothly you manage the turn. The variables you’ll face are the same as when you ride alone, but the pressure that comes with leading others can cause some riders to make poor decisions. Avoid this by remaining calm and acknowledging that it’s better to scrub off a little speed by feathering your brakes prior to the turn than it is to overcook a turn, wash out & cause a pile-up because you exceeded your skill level. Also recognize that you’re picking the safest line through a turn so if there happens to be a dangerous situation, e.g. a wide groove or crack, gravel, a parked or oncoming car, etc. then it’s your responsibility to guide trailing riders safely around these obstacles both in terms of a verbal announcement as well as a safe line.

4. Rotating through a Paceline

This is another subtopic that merits its own slew of stand-alone articles (here’s a prime example including illustrations, compliments of SugarCycles.com) so I’ll just touch on some basics. First off, recognize the wind’s direction at all times because it will continuously influence the actions of the paceline, e.g. crosswinds necessitate echelons & cause splits, lead riders will pull off into the wind thereby sheltering the next lead rider for a few moments longer, etc. Secondly, always make your intentions clear using arm gestures (e.g. a flick of the elbow), verbal statements (e.g. “Pull through!”), and obvious body gestures like pointing out your intended position or slightly turning your head and looking at a gap as you ease into it. Thirdly, avoid erratic or sudden movements at all costs. This is important in a single-file paceline but becomes exponentially more crucial when working in a double or rotating paceline. Finally, maintain speed. When it’s your turn in the wind, nobody is impressed by the rider who pulls through so strongly (read: wastefully) that it disrupts the flow of the paceline. A good tactic is to check your speed when you’re second in line so that when it’s your turn to pull through, you do it at a steady speed even though your work rate climbs substantially.

This last one’s the easiest of them all because it boils down to simply being aware of, or making others aware of, an impending stop or reduction in speed. This is often handled by calling out the obvious declarations, “Stopping” or “Slowing” and/or by offering a hand gesture such as an open, palm-out hand placed behind you on your lower back, a closed fist placed in the same spot such that the rider behind you can see your warning, or a “calm down” sort of gesture made by holding your hand to the side of your body and almost patting the air in an up/down fashion.

So there you have it – some tips on riding more considerately, more enjoyably, and less wastefully whilst in the company of a few, a hundred, even a few hundred other likeminded gear-heads. Now go forth, ride responsibly, ride fast, have fun.

The Road to Cyclocross Nationals