A Country on Wheels

My Mother sometimes tells me, “Alex, you know you were born under a lucky star, right?” I do not like it when she says this for two reasons: 1) It is an inane saying; 2) I’m a grown-ass man, Mom. Lucky stars are for children. I can nearly grow a patchy beard, okay? There are elements of truth in that ridiculous saying (no offense, Mom) because I often hear this from her whenever the topic of my frequent trips to Europe arises. I’m incredibly lucky to have awesome friends across the pond, and I’m extremely fortunate to be able to visit them with some degree of regularity. I have friends in Switzerland, Germany and the Netherlands, and feel as though I have a home away from home in each of these countries. I don’t want to play favorites in case some of my German or Swiss friends read this, but I always base myself in the Netherlands. I do this for a myriad of reasons, not the least of which being I am a cyclist; and if you’re a cyclist, the Netherlands is a very, very good place to be. Let me put it this way: There are many more bicycles than people in the country. Facts like this make the small yet densely populated country the most bike-friendly place in which I’ve ever had the pleasure of turning a pedal.

The Netherlands, or, somewhat incorrectly referred to as “Holland”, is very famous for tulips, windmills, wooden shoes and permissive laws in regard to soft drugs and prostitution. Unfortunately, this woefully deficient list of attributes tends to pigeonhole the country in the minds of some. Here is a transcript from a typical conversation in which I tell someone I’m going to “Holland”.

So what are you up to this summer?

I’m actually going to be visiting a few friends in The Netherlands.

Actually, the Netherlands is a single country despite it sounding plural in English. It’s “Nederland” in Dutch, but most English speakers just call it Holland.

Well, the country tends to have somewhat progressive views regarding marijuana and prostitution, but it is by no means a free for all. Marijuana is officially “tolerated”, and prostitution is legal within certain constraints.

Makes a smoking gesture with thumb and pointer finger and says, So THAT’S why you’re going there! **wink, wink, nudge, nudge**

That is a slightly exaggerated version of how those conversations go nearly 70% of the time. It’s rather annoying. These infamous activities take place in very specific corners of Amsterdam and are, uh, enjoyed predominately by tourists and not the Dutch themselves (no judgment here, by the way).  The fact is, the Netherlands is home to wonderful people with wonderful culture – and riding a bike is a central aspect of this culture.

I’m certainly not suggesting that every 12-year-old Dutch boy and girl is sporting the latest Louis Garneau and bragging to their classmates about the deep section wheels they got for their birthday. You also don’t see (many) grandmothers in skin suits and aero helmets. Indeed, there are plenty of cyclists who do don spandex and have borderline erotic thoughts of FTP increases, but that is pretty much the M.O. for most of Europe. The people that live in the Netherlands are not necessarily “cyclists”, but rather just Dutch people – because to be Dutch means that using a bike to get where you’re going is deeply rooted within your DNA. 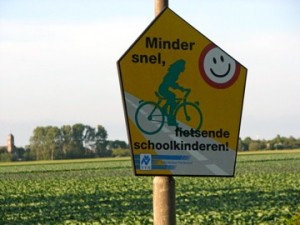 I won’t waste anyone’s time by listing the numerous environmental benefits to this way of life because they’re pretty obvious. Less obvious are the reasons this country is so conducive to such a lifestyle. Here are a few:

It would stand to reason that with such great national emphasis on cycling, the Dutch would put an equal amount of emphasis on the ‘pimp factor’ of their bicycles and would all ride ultra posh rigs. This is not correct. The main two-wheeled vehicle of choice is a humble yet dependable workhorse – a simple cruiser with a name as understated as its looks. A main variety of this cruiser is affectionately referred to as omafiets. The translation means grandma bike.  Dutch people are known for their frugality, but I believe there are more reasons for the ubiquity of the simple omafiets than financial prudence. As I said above, bike theft is a bit of an issue in the larger cities, so one is kind of “asking for it” if they roll around on an all carbon fiber, Gucci-edition bicycle. Additionally, the Kim Kardashian of cruisers won’t have the character that the somewhat beat up, old bikes have. Not unlike a classic car, these cruisers have seen some sh** and are all the more awesome because of it. 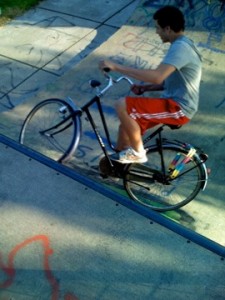 An omafiets can even take the abuse my friend Rob doles out on a skateboard ramp!

I cannot speak for everyone in the country, but the unpretentiousness of my Dutch friends’ cruisers mirror their overall attitude regarding life. Without digressing too much, success is not primarily measured monetarily for them. Having the largest and most expensive car is not a priority. Stuff that would normally stress me out does not bother them the way it would bother me. And although the amount of people I know in the Netherlands does not constitute a statistically significant sample of the population, they all have very admirable views on life. I know that plenty of factors contribute to this, but I feel that the cycling culture plays a role. Think about it – even light exercise yields health benefits and a clear head. Healthier, clearer-thinking individuals make for a happier society. I’ve spent quite a bit of time in the Netherlands, and I truly feel that this theory doesn’t just apply to my friends, but to a large portion of the country.

So what’s my point? Well, if you are one of our TrainerRoad subscribers that live in the Netherlands, gefeliciteerd! You live in a great country in which the roots of riding a bicycle run deep. If you live elsewhere, and are into cycling, visit the Netherlands if you can! Whether you’d like to rent an omafiets or ship/rent a racefiets, you’ll have a great time. And if the strong, Dutch headwinds don’t sufficiently humble you on a training ride, you can easily pop down to Switzerland for a jaunt up Verbier.

The Dutch bike culture has helped me perceive cycling differently – with a mind void of intense thoughts regarding functional thresholds, optimal cadences, and average heart rates. And while I will never cease to love cycling as a sport, I’ve learned to realize its potential in the context of an entire culture. As I sit in my car in traffic, feeling irritable, I think about the beautiful simplicity that a cycling-steeped culture can bring. Sometimes I wonder if I’m at all romanticizing this notion. The minute I swing my leg over a cruiser and ride off on an impeccable Dutch bike path, however, I know my conceptions are not far from reality.

What do you think? This post is predominately comprised of my view of the country, peppered with a handful of supporting facts. Are you one of our TrainerRoad subscribers who live in the Netherlands? Are you someone who has visited? Let me know in the comments section if your experience of this country matches what I’ve said!

P.S. The first person to correctly explain in the comments section why “Holland” isn’t a completely correct way to refer to the entire country gets, um, some pretty cool bragging rights!


You are 20% more likely to improve your power-to-weight ratio using Adaptive Training from TrainerRoad.

Get the right workout, every time with training that adapts to you.