It’s an interesting question for sure. I’ve done Antelope twice so far this year; second time avg HR was about 7 beats higher but avg cadence was higher too. I wasn’t running straight after so can’t report back on how that aspect went.

Finished Brasstown - thus marking the end of SSB LV1. I noticed that it’s easier for me to do standing-up sprints. Looking forward to measure my FTP gains next week and kick off SSB LV2. 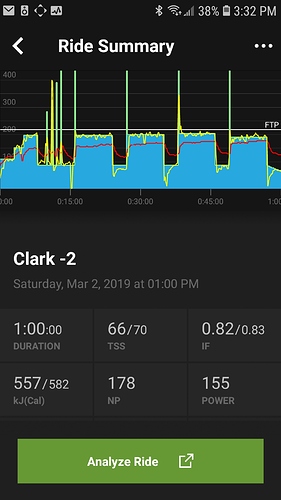 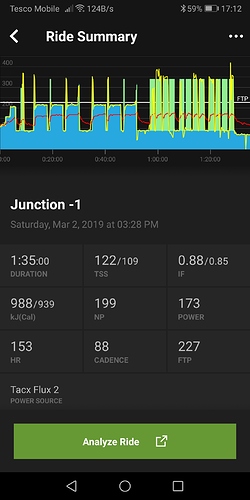 … low cadence partly for the same reason you articulated: https://blog.trisutto.com/low-cadence-triathlon/

Check our the comments, I’m also unaware of any science backing this opinion up.

Rationalising, I get that it should be a trade between impacting your legs or your aerobic system but I’m not a fan of assumptions.

My TR sessions average 86-88rpm but I can’t spin faster then 65rpm uphill and stay below VO2max, so outdoor and race day averages 73-75rpm.

A poor February and now I have a bad back. Away on holiday this week and hopefully will return refreshed and revitalised. CTL down at 26 from the normal ~53 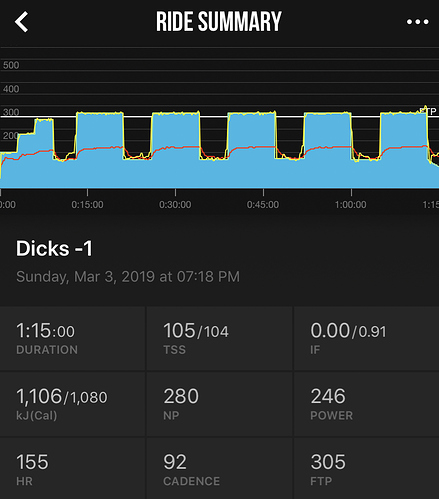 Happy to complete SSBLV1, slight adjustment today to Tower as I had planned a cafe ride but the weather didn’t cooperate. 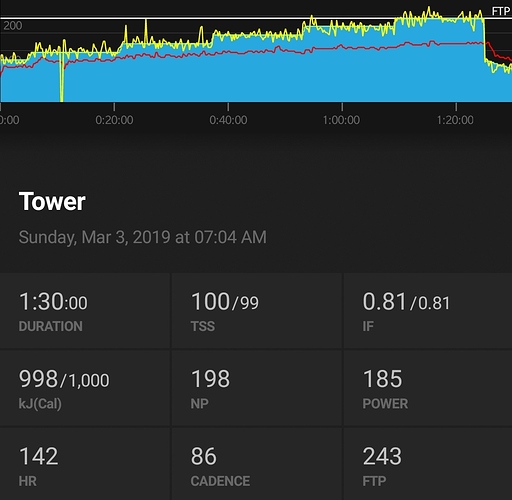 Midway today. B.R.U.T.A.L. I did it a bit underfueled though. Glad it’s over. 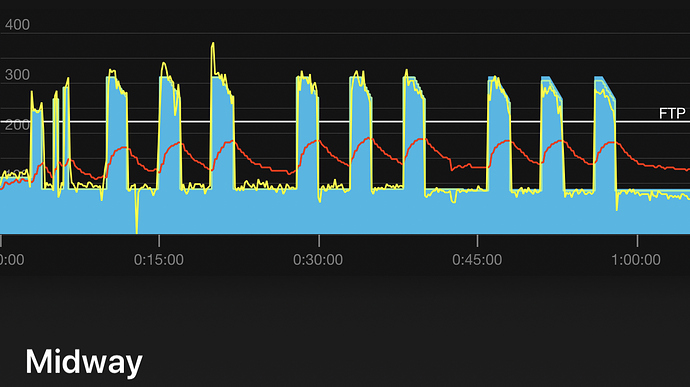 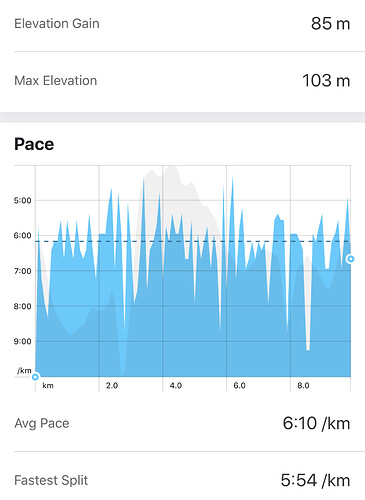 Easy-effort trail run with the dog this morning, 90min. 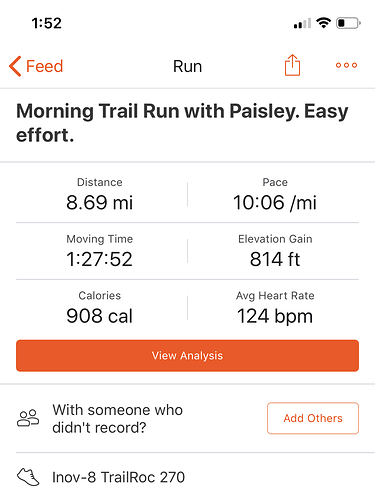 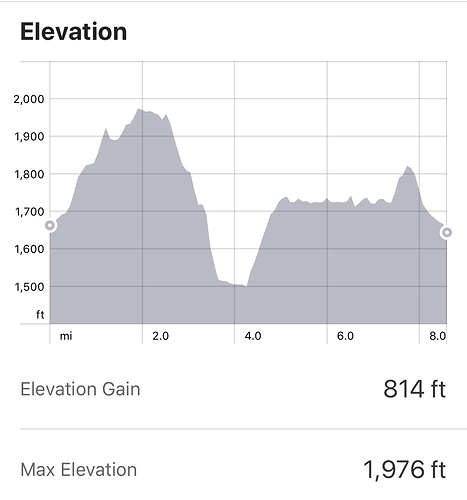 Followed by a family (sans son who opted to stay home) ride to brunch. 7.7mi there but 5.5mi return (daughter was beat so hopped on a train & bus for the final stretch, including a serious climb; clever girl). 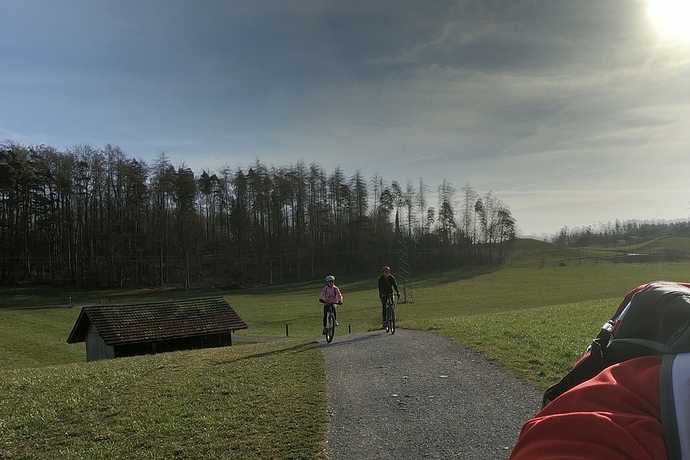 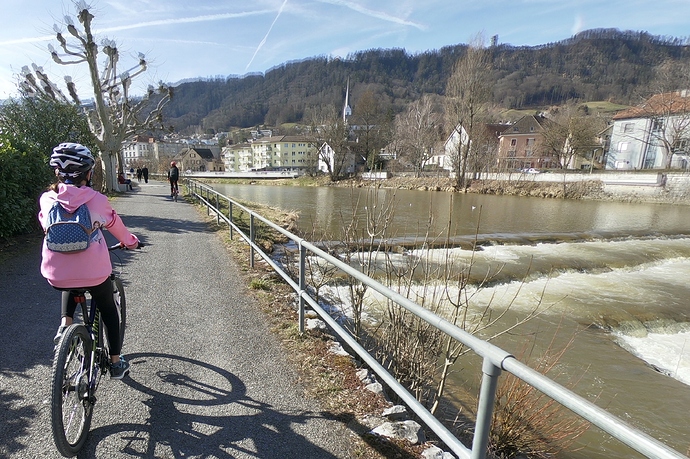 Perhaps the additional 15min wouldn’t have mattered much, but I think it probably would have!)

As for cadence, I was not targeting 65 but comfort. I went back to look at several events last year, and I see I was pushing a big gear / low cadence a lot more than I thought. At IM Wales 2018, the average cadence for the bike was… 65. But as I moved through the cadence/speed/power chart, I can’t but wonder if the average ‘actually pedaling’ cadence was in the 70s considering all the below 60s. Similar was true of the bike portion of LCW Wales earlier in the year. However, for IM Wales, I am hesitant to put that forward as some good or bad example as my training completely fell apart and I had effectively a six-week taper going into that race. (The bike was 6:30, 30+min slower than expected, and my run was 5:23, my slowest ever and at a pace markedly slower than a 50k trail race, in heat, w 4300’ of climbing, I did just 12 weeks after a Jan 2018 cycling crash where I broke several ribs.)

My road bike cadence tends to be a bit higher. It used to be in the 85-92 range, now 85ish. My tri cadence feels more comfortable slower. Is that good? Appropriate? I don’t know. Does the tuck influence it? Surely these questions have been asked and answered, but I have not looked at the literature.

By comparison, I find that when putting on my road shoes and running on the road, my cadence and speed and speed endurance is greater than wearing my trail shoes on the trail. Mental? Is it like swimmers who shave down (where the argument is the resistance lost is minimal but the psychological effect of the enhanced feel is substantial)? Is it the weight? Both are 4mm drops, but the road shoe is “183g” and the trail shoe is “270g”. Can I feel 87g?

Started out with heavy rain for the first 2,5hrs then it stopped and the sun popped by to say hi. 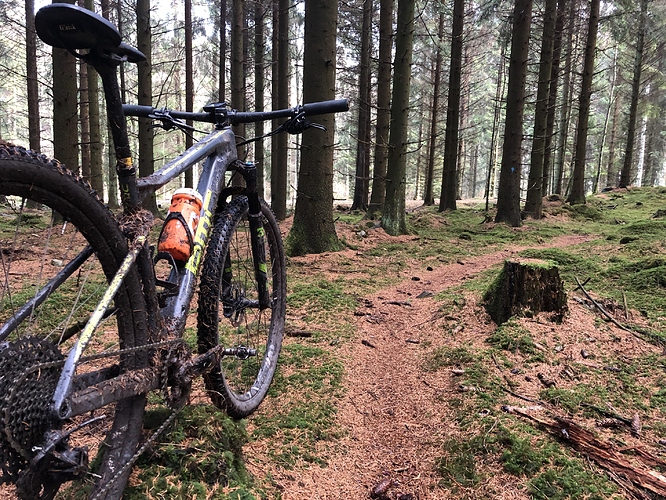 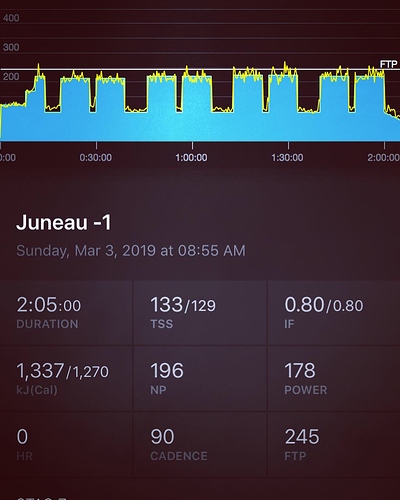 4x 18mins Sweetspot. Made easier because I’m mad about something that happened at work

I did a Ramp Test today, to see the starting point after the training camp at Lanzarote. Have to say the two weeks there was time well spent, the result was 119W. So the FTP raised from 116W → 119W. I decided to try the first few sessions using an FTP of 120W, and see how the sessions go with that. 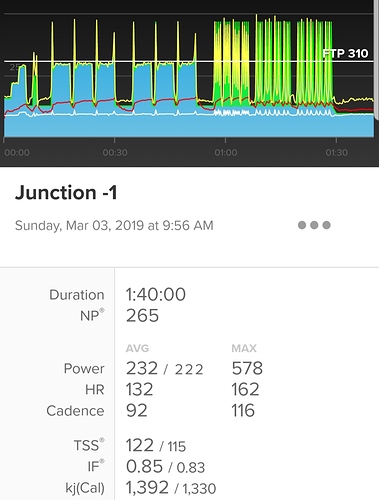 20190303_123055.jpg1080×1422 328 KB
Junction - 1 today. All went well until the microbursts, as expected. I was falling off target (465W) during the first set so I modified to just doing every other sprint on the second and third sets to keep hitting the high power vs. repeated lower intensity sprints. Not sure if these types of intervals are easier or harder with a dumb trainer - - I always ramp up the effort before the interval to account for lag so they’re more like 20" on/10" off, but I also don’t hit a resistance wall if I can’t maintain things so there’s probably good and bad on both ends of the dumb vs. smart trainer spectrum.
6 Likes
JCorfield March 3, 2019, 6:52pm #2310

Felt pretty crappy on the bike this last week, just no go in the legs so took a couple days off, and felt really good for this one

Tomorrow marks the start of my A-race plan - Base, Build and Speciality. Decided to try high vol for the base, mid vol for the build and then low for speciality (Will include outdoor rides in this, so it’ll bump up the weekly TSS)

3k swim this morning, then this to top of the week. One album of Paul Kalkbrenner and an episode of The Punisher

I suffered a collapsed lung immediately prior to, or during, the TT. Didn’t know what was going on during the race other than that I couldn’t breathe well and was hyperventilating at my target power. Dropped the power substantially and suffered through to finish in the top 20 in the TT. Started the road race but had the same issue - still not diagnosed. Couldn’t work hard but could sit in. Got dropped around mile 75 and just rode it in easy for a DNF. Completely baffled as to what was wrong wi…

And only a 1hr workout!?! Whaaaaat?!? Spring has sprung!