You were over 100rpm in the early parts of the test. At the times listed you can see an decline in cadence. Slower speed requires higher resistance force, so the trainer clamps down.

If you don’t respond with the appropriate force, you will slow down more. That’s what it looks like here.

Watch these then. ERG is commonly misunderstood when used at first. I think that’s what is happening here. 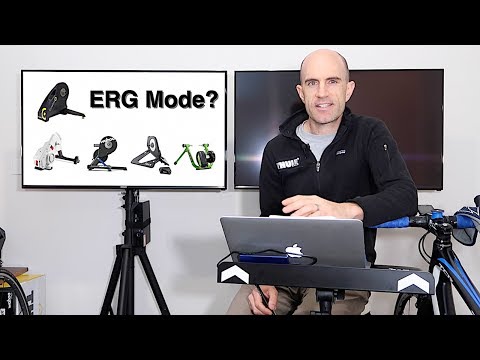 Another variable I see is that you are using a Stages power meter along with the Core. This means you are using PowerMatch (unless you changed the default settings).

As such, this also impacts the results you see in ERG mode. It is another layer of reading power and adjusting the trainer.

That along with any inconsistency in controlling tour cadence can lead to the problems you experienced. If you do a better job of maintaining your cadence (with minimal variation in rpm, and no shifting), you will have better results.

PowerMatch is a feature from TrainerRoad that allows you to use your power meters to control the resistance on your smart trainer. Additionally, you can manually adjust the power readings on your s...

Are you supposed to shift gears while in erg mode? I typically aim for 95 cadence as that seems to be my sweet spot. I saw I was hovering north of 100 during the warmup and clicked it up a gear or two as the test went on to get cadence down to my desired ~95.

Don’t shift in ERG. If you want a slower cadence, you simply slow your legs down. This ends up dropping power below target. The trainer will react to hold the power target by increasing resistance.

If you want to pedal faster, you have to push harder (which overshoots the power target) and get you your desired cadence. The trainer will then reduce resistance to hot the power target.

I honestly think most of your issues came from a misunderstanding of ERG and what you need to do to make it work well. It’s like any other tool and works as designed, but it must be used properly and as intended to get the right results.

First one was very informative.

Should i not use power match for ramp tests?

I can’t answer the PowerMatch question. There are people who like it and others that don’t.

Ideally, it makes sense to use so you are using the same basic power meter data inside and outside. But enough people have had issues that I don’t see it as a perfect solution in all cases.

I find powermatch is great mostly, with 2 exceptions: if my ant+ drops out, erg mode turns off and never turns back on - so i always watch that and press M to re-enable -No idea why, but it simply doesn’t seem to match in the same way during a ramp test Anyone else experience different matching between ramp test and other workouts?

Sadly I have 3 bikes with 3 different power meters, and then the wahoo.

I have used Powermatch since day 1 with TR. Initially it was a first gen Kickr back in the day. Nowadays, it’s with a Neo. The bikes all have Power2Max. Over 4yrs now and I can count the number of ERG issues I’ve had on one hand. +1 for Powermatch !!

You stated you like 95rpm. Well, when you retest, settle in at 95rpm. Remember, if you let the cadence drop, ERG will increase the resistance. If you let the cadence drop too much, you enter what is called the spiral of death where the ERG keeps adding resistance and you are unable to generate the power at that low a cadence. Boom… game over. The opposite is true w/increasing the RPM and ERG reducing resistance, but this is hardly, if ever, a problem that anyone has ever complained about.

Is it normal that the power output isn’t the same as the ERG prescript ed power ? As in: your wattage is all over the place. While ERG should hold your power constant? Or has this to do with the powermatch features?
My ramp:

Is it normal that the power output isn’t the same as the ERG prescript ed power ? As in: your wattage is all over the place. While ERG should hold your power constant? Or has this to do with the powermatch features?
My ramp:

Your ramp is an artificial representation of your power (ie: smoothing). It is probably impossible for someone to hold their power output that close to the target power. This is more typical: 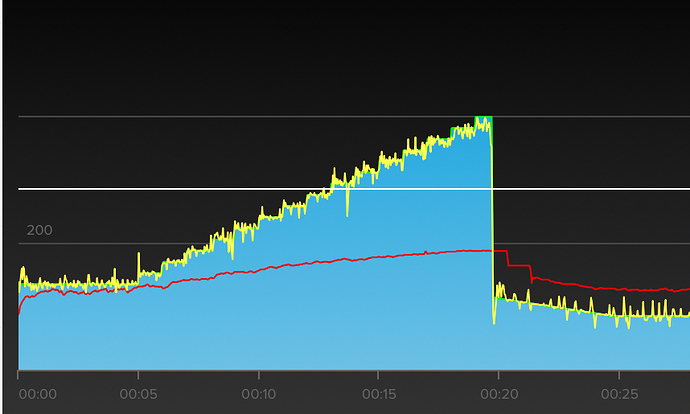 If you have a Wahoo trainer, watch this and change the setting to turn the smoothing OFF.

Ah, the ole spiral of death. I’ll never forget my first erg mode ride and the 4 or 5 after it. I was in zwift doing a workout for the first time. Power target went up and almost instantly i felt like my trainer and legs got dropped in a vat of cement. I had no idea what happened or why. After that I realized that you can’t let your cadence dip without being on top of the resistance you are pushing. For the next few workouts I couldn’t understand why erg mode was forcing my cadence to go faster and faster. Eventually it clicked that I was doing that, not erg. I was chasing the power target rather than setting a cadence target and letting ERG mode adjust the resistance. You have to trust the trainer to manage the power. You just need to keep pedaling at the right cadence for you.

I use power match all the time, no issues on the ramp test. As @mcneese.chad says, Erg requires you to stay on top of your cadence to work properly. In my experience, I generally find that I have to pay much closer attention to cadence instead of power in Erg. Power takes care of itself in all but burst circumstances.

This simply looks like you entered the death spiral - maybe you didn’t know you were dropping cadence, but as cadence drops, resistance ramps up, and it can get ugly fast.

Woe is you guys.

pay much closer attention to cadence instead of power in Erg.

This is my biggest single recommendation for ERG use. Ignore power, watch your cadence and do your best to keep it very steady.

Less fluctuations of your cadence will yield a smoother and better ERG experience. Only change cadence when you want to do so. You are responsible for that, not the trainer.

During my second ramp test, i’ve noticed the cadence ramped along with the power output. Is this a bad thing or is this just my natural cadence with higher powers?

I concur with the above posts that this is probably an issue of the user allowing ERG mode to maintain target power despite growing slips in cadence.
I disagree, however, with this assertion: “If you let the cadence drop too much, you enter what is called the spiral of death where the ERG keeps adding resistance and you are unable to generate the power at that low a cadence. Boom… game over.”

If you let the cadence drop, keep up the pedalling pressure and shift gears to establish a higher cadence, and the resistance will subside to maintain power at the new cadence. With practice, one will learn to avoid this avalanche of slipped cadence and unsustainable resistance load from happening, but even before this skill is learned, it’s not strictly game over for the newbie. Shifting in an interval, after a surprise change in load and cadence gives the rider another chance to hit the new target.
With further practice, in addition, one can learn to employ an “unsustainably high” cadence in erg mode to prompt an erg mode decrease in resistance load, in anticipation of shifting to a harder/higher gear, thereby managing the bike’s chain position on the cassette and preserving the ability to recover from accidental or temporary slips into a “too low” cadence.

It’s a “bad thing” if it’s not what you intend to do. People need to take an active roll with ERG, especially in the Ramp test. You need to choose a cadence to hold and attempt to hold it the best you can. DO NOT be passive and allow the test and trainer to control you.

That is all true up until the final moments of the test, when you begin to really fail. In many cases, that shows as cadence sliding downwards to the point that you can’t turn the pedals over any faster than 50-70 rpm. If you hit that point and can’t return to a higher and desired cadence, you are done and have completed the test properly.

Maybe it’s appropriate to alter cadence throughout the test, but I think the intent is generally to hold your preferred cadence within a tight-ish range (+/-5 rpm?) until you can’t hold that any more. We do usually work on applying higher cadences as we get above Threshold in most workouts, but this is different in my eyes.

In any event, whatever cadence and trend you have in a Ramp test should be repeatable. If you don’t do the same thing each and every time, you are introducing variables that are likely to alter the results and what can be learned from the test. It seems holding to a single target is easier to shoot for vs some sliding rpm (up or down).

Shifting in an interval, after a surprise change in load and cadence gives the rider another chance to hit the new target.

I see shifting as a crutch, and one that should not need to be employed in a Ramp test.

Additionally, if people use shifting to get over a hump, they SHOULD be returning the bike to the prior gearing once they get on top of the effort again. If not, they are likely to be altering the flywheel speed during the test. (I couldn’t really tell from your recommendation if you were suggesting a return to the “start” gearing?)

There is debate about the impact of that change and what it means to the FTP derived from the test. I am fairly certain that it does have a realistic impact, especially if the change continues in one direction only in the test. Maybe it’s a non issue if the person repeats the shifting trend in all future tests, but it is yet another variable (like the sliding cadence discussed above) that may alter the results of the test.

Keep in mind that tests like this rely heavily on the repeatable nature of the test. We should do our best to match the conditions of the test (room temp, humidity, fans, rider position, bike gearing and more) so that we can compare results from one test to the other. That may not be important to everyone and all they care about is finishing the test and getting an FTP number. But it may well lead to training issues if they end up with variability from one phase of training to the other.