what you mention: 2 gels for a 3h bike and 1h run… you definitely underfuel.

on usual days I don’t do stuff I do during racing because IMO the sugary products are pretty disgusting. my goal is to eat good food, every day. the base of that is a solid breakfast and good fuelling habits. a solid bowl of oats + banana gets me started. I fuel all workouts > 1 hour, eating every 45-60min, mixing banana/clif bars, etc. for long stuff on the bike I would add an electrolyte tab (BORNE) or salt/lemon to H2O, not absolutely needed but I like it. I post-workout fuel after every session, even a 30min run, with choc milk as my current go-to (experimented with protein shakes but don’t stomach it well). when I have two workouts a day I started to have a second breakfast after the first workout. without it my energy levels were insufficient at work.

for the rest, just as reference, I have a “normal” lunch and dinner (my colleagues cannot believe how much I eat, still, but well) and snack fruit once or twice, dependent on how hungry I am. I base what I eat loosely on Fitzgerald’s endurance diet and sometimes track Diet Quality Score for a few days to calibrate. never count calories.

having written all that, I am eating more than I ever have before but my weight and body composition are on point

for race fuel (including simulations) I think it’s actually much easier than normal days. I focus on 3 things only: calories, fluid, sodium. I just make a sum what I need in total and break it down per hour, distributing over fuel-5 / clif bar and shots / gels (in bottle w H2O). I start calculating the calories and I’m always left with a sodium deficit, which I then add that to H2O and fuel-5.

@schmidt Thanks for both of your replies! I should have added that I am fortunate enough now that my school schedule allows me to train Monday-Saturday allowing for Sunday to be a full rest/family day. Has really helped keep my wife supportive!

I know you both had mentioned not overloading the schedule, but I was moving things around on the calendar and I think with using Friday as an extra off-day, I could make it work to get all but the 3rd swim session in.

Here is the original plan:

I know I’m not a pro, sponsored or even in contention of winning the race, but fell in love with triathlon and don’t foresee myself getting to do many in residency! Been really sharp about my nutrition this year and feel it has paid off immensely already.

Thanks for the good wishes @schmidt ! Got the email yesterday saying I matched, now…where! Mind if I ask your field? I applied ENT myself

looks like a solid plan to me, I would just see how I feel about having 3 consecutive bike workouts with warlow in the legs - too much, I’d consider Pioneer instead of the +1 version or even a -1.

I’m in peds & hematol myself, on an academic track. currently taking time to wrap up my PhD which is long hours but works well with training. others seem to integrate training pretty well with clinical work/residency, e.g. @mtstanek… but IMO that depends a lot on your local environment and other competing life priorities.

on usual days I don’t do stuff I do during racing because IMO the sugary products are pretty disgusting. my goal is to eat good food, every day.

Mmm, I partly agree - I don’t see anything wrong with using fuel designed to be consumed while exercising, whilst “real” food requires higher blood flow to the digestive system to be digested properly. But yes, eat good food every day.

Racing Ironman is where things seem to fall apart for me, I seem to eat and drink plenty but suffer dehydration badly which cripples the run…so I’m doing something wrong and want to get that right in training.

Drink 2x 750ml water with 120g Powerbar isotonic plus one bar, I think is my target per hour. I sweat heavily in summer. But it’s too cold to simulate that yet.

@schmidt @AujujuSauce what is up guys! Plan looks solid, to me. Getting in 6 days of training during a busy schedule is no joke. If you are at the point in the season that you are already hitting smoke stacks like Warlow, doing pioneer the next day might not be that taxing. Just have to end up seeing how you feel day in and day out. Happy training and good luck!!

That workout has disappeared from my workout options

It’s been renamed. It’s called Ochoco or something similar now.

Awesome! Thanks I found it now.

@schmidt thanks for the advice throughout the week! Ended up getting through it all even Pioneer +1 after Warlow. Seemed to be more of a mental challenge than physical, legs were feeling it but could keep going. Warlow after FTP test resulted in the unders being 3W over what I called my FTP one week ago, managed most of it in TT position, coming up as a way to relax my shoulders and focus again. 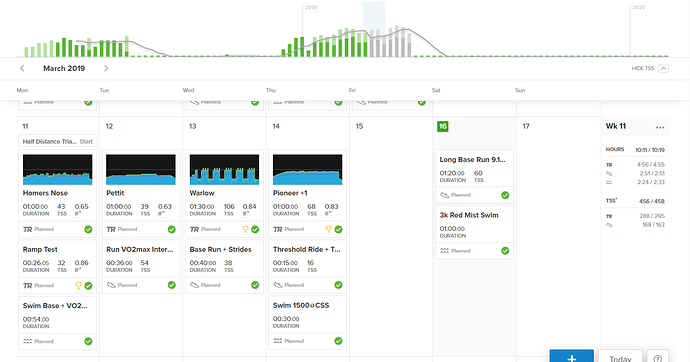 Match day was also incredible, wife and I got exactly what we wanted! @mtstanek the podcast episode you joined them on was inspiring, gives me hope that I’ll at least be able to try and do some racing

Heart rate running has made a massive difference, November I did an hours run at 10.30 min per mile in zone 2, today I managed 19 miles 8.35 min per mile all in zone 2.

Never bothered with heart rate training because I felt embarrassed slowing down so much. once you check your ego it makes a massive difference.

Right. Switching up the training plan, and moving outside after a trial run this week: 8hrs bike (2 on TR), 4hrs running.

I think I’ll keep Dicks +1 for solid intervals 115 TSS and the 3x 2h hill rides ~300TSS taking it up to 4x for the heavier weeks. Try to smooth at least one ride out remove all the anaerobic and VO2, aim for all in Endurance or coasting.

4-5hrs /wk running over the next three weeks, then taper the run for marathon day. All at or below marathon pace, mostly hilly runs keeping aerobic and HR down.

Quietly confident this approach will work after all the TR sessions since October. Just need to sort out sleep and nutrition

Thanks buddy. And huge congratulations! Life only gets easier from here on out. Enjoy the ride.

4-5hrs /wk running over the next three weeks, then taper the run for marathon day

Nice to hear that the event is coming close. Solid work

Well one of my planned xterra races is now canceled so my race season plans are now in flux. My wife is now trying to plan a week at the beach in July so it looks like i may have time to do most of the him specialty plan after a week of r & r. I may look out for some late season mtb races too but right now there isn’t really anything on the calendars. Trying to get in a third race will be required next year if i want to have a chance of earning one of the regional qualifying spots for Maui.

My long runs in Zone 2 have been coming down too but not nearly so dramatically! Well done.

I got to the first four hour long endurance ride part of my plan last weekend. Seeing as I had a race coming up I thought why not try it in my club tri suit? This was a mistake. It is definitely not a long distance tri suit

; the pad is narrow enough that it misses the overlap between my sit bones and my ISM PN saddle but worse, that is where the stitching is, which is neither flat not soft (may as well be sitting on a cheese grater).

I did a CSS test last night! Wasn’t fresh for it as had just done Mist on the bike but got a sub 2m CSS pace for the first time. Nothing to write home about but an improvement is an improvement

I’m off to Clumber Park for the duathlon this weekend. I’ll be treating it as training as it’s an ‘accidental’ race; deferred from last year when it was snowed off. Wish me luck! If any of you are going and see a guy struggling and wearing a Brighton Tri club suit, say hi as you bomb past me!

where the stitching is, which is neither flat not soft (may as well be sitting on a cheese grater).

/me winces in solidarity

I’m at clumber this weekend too, never done a duathalon before but its local to me so using it as a good test of fitness.

How much time must pass between workouts to not be considered some kind of brick? For example, my swim last night (3000m) started at 6:30p and I was out of the water just under an hour later. At 8:30p, I was on the turbo for a 75min workout (Holt Hill-1… I planned to do the 90min Holt Hill but I dilly-dallied). This seems like something more than a ‘double’ (not mentioned was I did an easy 30min run that morning, so a ‘triple’?).

While names don’t matter, shouldn’t this be considered with regard to rest?

Brick I think is a term reserved for going straight from one discipline to the next, within a reasonable time simulating transition of a race. If there was an hour between the two I wouldn’t call that a Brick.

But that’s just a name. In terms of training, setting aside getting used to switching disciplines, its about taking fatigue into the next discipline so if you are fatigued when you start you are getting some similar benefits of race simulation to a brick.

That all said, you’re going to get the best physiological benefit from training when you’re not fatigued. So I think once you are experienced with running off the bike there is not much need to do long brick runs, a short run around the block can get you through that mental hurdle.

Good luck! I’ll be racing the 70.3 event and stick around the next day, watching the full distance with my legs up in the air and lots of fast food probably