This is probably a bit of an academic discussion (at least for now) as I don’t have permission from the wifey to get another bike. But … if I were to get a gravel bike, what are the pros and cons of having similar versus different geometry than my road bike?

EDIT: I don’t race and am looking to primarily ride around 2+ hours but would like to be able to handle washboard and maybe some rain ruts.

For context I have a Fezzari Empire road bike and am considering a Fezzari Shafer and Lauf Seigla for gravel. (I’ve looked extensively at other bikes and these are toward the top of my list and represent the two general geometries I’ve considered.) The Seigla is better overall value in that the model I’m looking at includes a power meter, has a handlebar I’m more likely to keep, and front end suspension, whereas I’d have to spend more on the Shafer for a power meter and (almost certainly) replace the handlebars.

The Seigla geometry is nearly identical to the Empire (stack and reach within +/- 10 mm). On one hand I know it’ll work for me. On the other hand, I could put some 32 mm tires on the Empire (max clearance) and do light gravel without another bike. In fact, several all-road bikes have geometries close to the Empire. 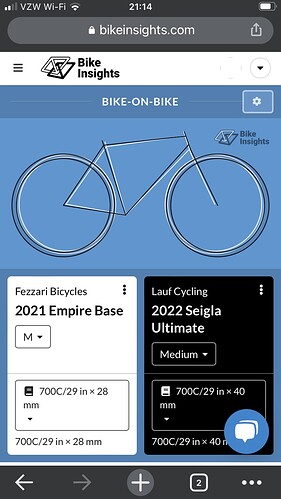 The Shafer has a more relaxed geometry with an exceptionally long wheelbase of 1060 mm (24 mm longer than the Seigla and longer than any other bike I looked at). Combined with a lower bottom bracket height, the Shafer should offer a much more stable ride, but, perhaps, be less responsive during turns. I don’t race so I’m not sure this is much of a concern. 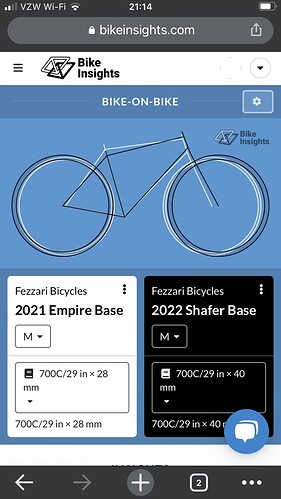 Also, I’ve taken the Empire on well-maintained dirt roads and it handled fine, only losing traction once. So, for the gravel riding I would anticipate doing, I feel confident I could handle the more race-oriented Seigla and, by extension, the Shafer.

Anyway, what other things relative to the geometries, these two bikes, or other gravel bikes should be considered? Thanks!

One consideration you didn’t mention is what kind of gravel you’ll be riding. Will you be racing? Can you fit 42-45’s in both bikes?. Are u aware of the vibration complains in the Lauf?.

What type of gravel riding do you plan to do? If its just basically road rides on light gravel then keeping a similar geo makes sense to me and the wider tire clearance will be noticeable for sure.

However, this approach really misses why I love riding gravel on my gravel bike. Longer days in the saddle, bikepacking, single-track shredding, are why I ride gravel and why the Seigla is the obvious choice for me in your situation. Simply put, you will be more comfortable for much longer with a slacker geo. This opens up new route options and multi-day treks that seem like they would be slog on basically a road frame.

As for the Lauf vibrations, are you talking about with or without their special fork? I know it is tuned to damp high frequency chatter like washboard, but I’m unaware of other issues.

With the fork. When I looked into this bike last year, I found a couple of reviews mentioning this issue. I wish I remembered where it was.

BikeRadar and others seem positive toward the fork for what is is designed to do, which is dampen high frequency chatter like washboard. It will absorb a larger hit but not like a full suspension fork. There are reports of feeling a little like running on a flat tire on super smooth pavement, and the wheel twisting relative to the fork when sprinting. I have no sprint so that part isn’t a concern. Dampening washboard is appealing but, again, I don’t know how much a larger volume tire will handle without a suspension fork, but can see the benefits on longer rides where fatigue becomes an issue.

I’m a little confused by your post. The Shafer has the more slack geometry whereas the Seigla is more aggressive but has the suspension fork.

My bad, I would still choose the slacker geo with rigid fork for all day comfort.

Why not just ride the MTB on gravel?

I don’t own an MTB and am not interested - seen too many encounters with trees, and not in a good way. I prefer drop bar bikes.

If it’s a toss-up and you can’t decide which one you would like more, I would think that the wait time is more than enough to make the decision.

Cycling Tips just reviewed the Lauf and there is a good summary on Youtube.

Honestly from what you mention, I would either go for the Lauf or just get a set of cross tires (amd maybe new wheels) for the road bike. Your gravel riding doesn’t sound particularly ambitious, so cross tires on the road bike would do the trick. If, however, you plan to have bikes that cover a broader range of conditions and applications, at least the geometry and fork on the Lauf lend themselve to a pseudo-hard tail MTB replacement. The only thing it sounds like you get with the Ferrazi is more tire clearence.

@Grumpier.Mike thanks. I have some Hunt 35 gravel wheels for the Empire and I’m fine on (very) well maintained dirt roads. However, washboard, rain ruts, and anything worse is beyond the Empire - very jarring, chain slap, etc. I’d like to do more aggressive riding, but feel I’ve found the limit of the Empire. Larger tires would help a lot, which is why I’m torn between the two bikes because they both have huge clearance, and then the pros / cons above.

Did you look at the Canyon Grizl?

I have many friends who have the Seigla and love it. I have the True Grit and love it. I have no complaints about it. I added a redshift sports shock stop seatpost to provide a bit of suspension as anything over 4 hours on gravel my back would be wrecked without it. But the Seigla has a bit of flex built in on the back end along with the fork obviously.

I had a 2015 2x Crux with 38mm tires and loved that bike for gravel riding. It preformed really well everywhere except the downhill cornering on gravel. It was a bit twitchy, but it should since it’s a CX bike with a similar geo to a road bike. I now have a Pivot Vault and even though it’s a gravel race bike it’s slacker than my road bike and old Crux and it handles the turns on gravel much better. I’ve had some PR’s with the Pivot going down hill! I’d go with a slacker bike for gravel. Hope this helps

Did you look at the Canyon Grizl?

The Grizl’s geometry is in between the Seigla and Shafer and might be a good compromise. Unfortunately the only SRAM drivetrain they offer is Force and well above my price point. My Empire is SRAM and I want to have consistent parts across bikes. Not a requirement, but a strong desirement.

The Grizl’s geometry is in between the Seigla and Shafer and might be a good compromise. Unfortunately the only SRAM drivetrain they offer is Force and well above my price point. My Empire is SRAM and I want to have consistent parts across bikes. Not a requirement, but a strong desirement.

What about the Grail? I think it has the same basic geo as the Grizl, but comes in a Rival build as well, maybe more…

There are reports of feeling a little like running on a flat tire on super smooth pavement, and the wheel twisting relative to the fork when sprinting.

This is probably a fairly accurate description. For me, not really an issue as I don’t do a lot of sprinting but I don’t even know if it happens every time. But my recollection is it’s only happening sprinting on pavement and for me it really was just a weird sensation for a bit that was not a big deal