My sprint power is off the chart!

Err…off the bottom of the chart.

Did the TR group workout built for Hunter Allen’s power profile anlysis in a group workout the other day. First time I’ve ever operated my trainer in anything but erg mode. Well, 2nd time…I got on an hour before the group workout just to get a feel for what gearing/cadence generated what kind of power.

Anyhow, my threshold power is somewhere in the middle of the chart but my sprint power is well off the bottom. Which is not a surprise or even a problem…looking at my workout log I last did a sprint specific workout in 2017 when I completed a Burgomaster protocol. Except for form sprints Chad has me doing on EZ days.

Since I’ve got some ‘pandemic time’ on my hands, maybe I’ll do some dedicated sprint work this summer and see how much I can bring it around.

the coggan chart is made up of neo-pros from the 90s skewed towards sprinters. http://fft.tips/rankme is from 5000 ‘normal’ riders with power meters.

which trainer do you have? Recently on my Kickr direct-drive I’ve played around with level/standard vs resistance and my best sprints were done using level/standard.

WKO has age adjusted power profiles. My favorite is the Xert chart, you can see both absolute (W) and relative (W/kg) and in addition compare against different age groups.

Eh… trainer sprinting isn’t the same. I’ve never cracked 1000W on the trainer, but have done 1200 outside. Probably wouldn’t read too much into sprint numbers on the trainer unless you’re just going to be e-racing.

which trainer do you have? Recently on my Kickr direct-drive I’ve played around with level/standard vs resistance and my best sprints were done using level/standard.

I’m on an Elite Direto but let’s not go blaming my trainer!

But with a little bit of training how much and how fast could my sprint come around? It’s not going to help me but it might be an interesting way to pass the time.

According to this, it is based on world champions and record holders.

Andy Coggan adds some objectivity to finding your strengths and weaknesses, by creating a "power profile" using your power data.  Find out how to compare your power to those of your competitors.

I think the last update was about the time WKO4+ was released, so data should be from the last 5 years, maybe?

Without much effort I played around with my two non-Erg modes and got trainer and outside around same 5-sec power.

I’m interested in doing sprint development this summer, a quick search and came across this: 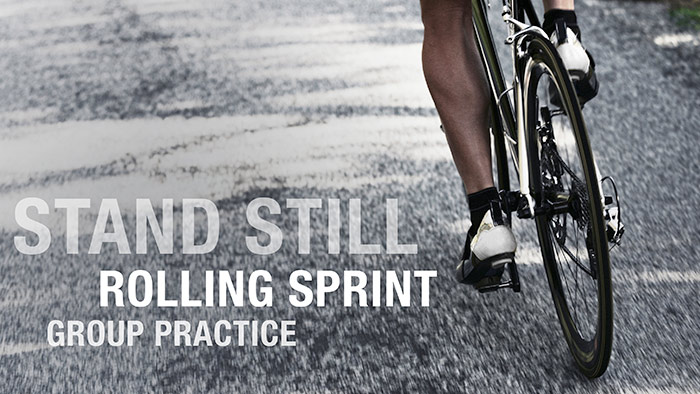 The Four Phases of Sprint Training

Developing a fast sprint take specific training and skills. To get that final top end speed, Coach O’Brien Forbes lays out the fours phases of sprint training to take your sprint to the next level.

It can come around pretty quickly if you mix up the training.

I couldn’t sprint at all and my power profile was pretty sad under 20min in general last spring. I was doing a ton of SS and tempo so my long power was great.

Got burnt out on that and switched to loads of Z2 and some zwift racing/Strava hunting and all the sudden I had long power AND a solid top end.

Moral of the story, if you want to train your sprint you have to practice and work it when you’re fresh. As to indoors vs outdoors, it’s a different technique but similar numbers. I’ve gotten up to 1200w for 5sec on the trainer and think I can wake out another 100w outside, but from there on up my numbers are dead even.

Worth mentioning, picking up some top end speed hasn’t hurt my long game at all. I don’t really focus on one or the other, just don’t neglect them either.

I have temporarily unlocked this sheet http://fft.tips/rankme so you can try it without even asking for permission to edit

Have you followed any sort of specific plan or worked with a coach? Or have you done it all yourself? If so, do you plan things out or just do what feels right that day?

Where did you pull these “normal” riders from?

I tried the sheet and while I appreciate the ego stroking, I think maybe it’s a bit heavily weighted towards fairly casual cyclists…

I used TR for a base and build cycle when I got back on the bike in the fall of 2018, but since then I’m self coached.

I have a pretty good idea of what I’m trying to accomplish and I’ll work on different areas of the PDC depending on time of year and my fitness. Basically I ride a lot of Z2 and a good bit of tempo with efforts mixed in through a combination of zwift races, free rides and I like at least one long ride outside per week when weather permits, 5-6hrs. Usually shoot for 12-15hrs per week.

Honestly, riding is the one thing I do just for me. I’ll be 40 this year, married, busy with work, four kids, etc. I’d rather not feel accountable for my training to someone else. I’m highly motivated as is.

LOL! I tried the sheet and it was worse on short power than Coggan, essentially a club rider. About what I expected for 20min +. It’s GIGO… so unless you have good data for each of those periods, it’s no better or worse than the Coggan profile. I only have really valid data for longer periods, so of course I’m a TTer who needs to work on my short power.

That said, I don’t need these types of profiles to know I’m not going to win many field sprints…

I enjoy that I get to be an ex pro, rookie pro, AND neo pro! Whatever that means

It was several large sources who were willing to share (or already broadcasting) power curve data at all time points up to 2 hours for samples over 500 riders each if I recall. Two example sources are GoldenCheetah public dataset and TrainerRoad public data but there were others. Regarding the comical 24x descriptive grades/labels that’s good feedback; I just updated them, thanks for the heads up

That makes sense then, as I imagine that golden cheetah, TR, intervals.icu have relatively similar user bases. All three are geared towards the semi-serious probably masters athlete who’s also a data/gear nerd.

While I can see how the Coggan chart might not be flattering to some in that demographic, I don’t think it’s too far off in general.

Was just having some fun about the category titles but glad you’re changing it up.

Without much effort I played around with my two non-Erg modes and got trainer and outside around same 5-sec power.

to clarify, those are seated sprints in the 900-1000W range. I’ve been working on the neuromuscular side of things and slowly pulled it up to 990W for 5-sec on the trainer (seated).

It was several large sources who were willing to share (or already broadcasting) power curve data at all time points up to 2 hours for samples over 500 riders each if I recall. Two example sources are GoldenCheetah public dataset and TrainerRoad public data but there were others.

The TrainerRoad data is not public and freely available to harvest, at least if you agree to live in a society that respects Terms of Service. At a minimum is not ethical to harvest that data, and failing to mention the source and the unethical means of collection is also a problem. And then there is the data itself, for example IF my data were public there are long periods of time without max efforts and so I’d also question the appropriateness of the data. There is so much wrong with what you are doing, not sure how you can sleep at night.