So I deleted my upcoming training blocks as I’ve decided to do a grandfondo in two weeks, so I thought I’d give plan builder another go and it worked really well!

Hey Folks Ive got a question regarding my plan:

Most of the plan seems focused on short anaerobic stuff found in the more crit specific plans.

Is it worth re-building the plan (removing some of the crits) so it focuses more on long AF endurance stuff?

Your Plan Builder orients your training around a singular focus: your A races.

So as long as your “A” races are all set as gravel events or gran fondos, then your plan is already optimized around long endurance work

I just tried to move a week and it gave me a warning saying that I would lose the ability to edit the plan if I moved the week, so waiting on a release for vacation / break function.

I tried to do so by moving ( and deleting a few weeks out to create “space”) but it quickly became a mess that didn’t match my events.

There’s no ETA on this feature so I just started FD Tri MV 2 weeks early. Hopefully when it arrives, it will be capable to adjust for plans already underway.

Meanwhile, I use excel to plan my year.

So I just deleted my plan and started over due to backing way off for a while due to injury. This worked quite well, once I found the way to delete my current plan - this took me a while to find.
I think it would be good to have existing plans be ‘selectable’ when you start plan builder. In other words, when you start plan builder, you would get a list of current plans that are active, which you could then modify or delete. Maybe this should really be on the ‘training plans’ page. I think this would be much better than having to find the start on the calendar, which is confusing especially if you back dated it to begin with.
Right now plan builder will happily create a plan that overlaps an existing one with no complaints. I would like to be told early on that I’m doing something dumb

Can someone please explain how you change the volume/ intensity of an active plan? Nate had it described somewhere above. Go to the calender, choose your block…
What is a block ? And where do i click on it? The columns, the Date of a starting week…? Am I the only one not getting it

Can someone please explain how you change the volume/ intensity of an active plan?

First, find the start of a new block. Here, I have the start of my Half-distance Build block as notated by the gray text box appearing above the day’s workout on the first day of the week. Just look for this gray rectangle stating the periodization step you are on (base/build/specialty) and click on it. Clicking the box will create the following popup: 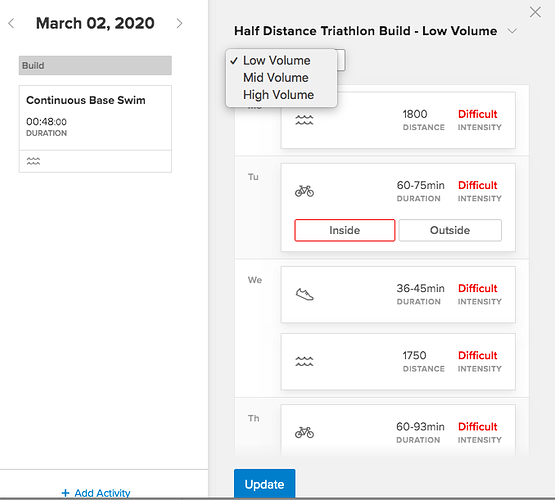 As you can see from the drop down just below the plan title, you can adjust volume here. You can also just drag and drop the days themselves to change your weekly schedule/intensity days. In the bottom left is an option to “+ Add Activity” if you had a new race come up you want to add into the builder. All you have to do after that is hit “Update” at the bottom.

Keep in mind though that if you have already moved UNCOMPLETED workouts in your calendar they are disassociated from the builder and I do not believe they will move. They should stay put where they are and you may have to manually adjust again.

yeah, that makes pretty clear what a block is. Thanks so much @bloya89 for the quick help!!!

I only really have one big race this year - a sprint duathalon in October…so put that as a sprint triathlon. All other races are C races really.

I’ve said no thanks as think that will drive me insane plus think not worth doing speciality phase except just before the race.

Therefore focussed on build and base more in early half if the year and also done some cycle specific plans such as general build to mix it up a bit (will add own runs). Also doing Olympic tri base right now to add bit more endurance and variety in.

However at least plan builder gave me something to think about! If had more (important) races throughout the year and/or more variety of races then plan builder likely more use.

I started Sweet Spot Base Mid-Volume II on Monday this week (having just completed SSBMVI last week), with a view toward getting two full base-build progressions in before cyclocross season this fall.

This morning I put my event schedule into Plan Builder, which includes some low-priority road and gravel events in the spring and summer. These keep me interested in training while I wait for the good stuff to start in the fall. Plan builder has me repeating Sweet Spot Base Mid-Volume I and then jumping straight to Short Power Build. Is this okay to do, or should I stick with a more traditional progression?

I tried to use the Plan Builder, but finally threw in the towel.

Originally, I used to to pick up after completion of SPMV2. I did this back in December and scheduled the plan to start this coming week.

Two things: I noticed that it started Sweet spot all over again (nr 2) and 2) I learned that you can back date it so that it will take your current status into consideration.

So I tried the same, but letting it start back when I started Sweet Spot 1, hoping that I could pick up on it next week (well, on Tuesday).

But it had me starting (ramp test) on January 20, and today is February 2. I tried this and that, but finally just gave up and went on to Sustained Power build.

Next year I’ll try to use it from the “get go”.

One thing I noticed today - I am about to start specialty, for an A race in April. It is rolling road race. However, I was thinking about including the option of doing some rides from the Century plan. I added Century and started comparing rides, deleting those I didn’t want, and leaving a few days with different options. As I got to the end, I realized that some times Rolling Road Race would be at the top, and other times Century would be at the top, depending on the day. This made it hard/confusing to figure which ride belonged to which plan.

Also, I really wish we could see a thumbnail of 2 rides on any given day, would be easier to be able to compare rides.

Thanks for reaching out! The way the Calendar prioritizes the display order of your workouts is according to TSS. The higher TSS ride will always be on top since it is your most significant ride of the day, and being on top helps it to stand out.

I really wish we could see a thumbnail of 2 rides on any given day, would be easier to be able to compare rides.

The trouble with showing both full thumbnails is that it starts to take up too much space, making the Calendar cluttered and hard to read at a glance.

Having two plans added to your Calendar at the same time is not really what the calendar is optimized for, but there may be a better way to accomplish what you are trying to do. What I would recommend is opening up the Century Plan details in another window and adding workouts individually to suit your needs. You can view the full Century plans here:

Could you just use the Climbing Road Race specialty? Without reviewing, seems like it’d be a pre-planned mix up of RRR and Century.

Thank you both - I ended up opening separate windows and reviewing. and will look into Climbing. I just an finishing General Build, which had more VO2 and Anaerobic work than I recalled in past years (maybe bc plan builder had me cut short SSBMV) and my A race in April will be a 2 person team event, and based on riding style/course, we will be looking to go more smoothly/consistently, rather than punchy. So was looking for some more SS and Threshold work mixed in.

Decided on a whim to change my Autumn gravel event to Gravel from Gran Fondo - really cool how a simple change in race classification changed the plan (after my spring A event).