If I pick an Alternate workout today, is it normal to leave the existing one in place? [Resolved ✅]

So I’ve been dipping into the workout library to chose a workout at the same PL as my given workout but that is much easier to complete online. I’ve found this easier to do versus using workout alternatives.

I complete the new workout and then delete the original one after. My PL’s are increasing as per normal (I think), but am I doing anything to hurt the AI logic?

I am glad you dared to ask that

I could not dare say anything!

I complete the new workout and then delete the original one after. My PL’s are increasing as per normal (I think), but am I doing anything to hurt the AI logic?

Yes you are, deleting a planned workout from Plan Builder removes it from AT logic, and adding one does not re-insert it into Plan Builder logic.

TrainerRoad workouts beyond Plan Builder will result in Progression Level changes (ie adding TrainNow). However, AT does not consider those workouts YET when progressing you towards your goals, or making potential adaptations that are reactionary to those added workouts.
Keep in mind that Progression Levels are simply a visual display of your current fitness based upon the work you have done. Its not what AT reacts to.

Sorry all, I need to provide a correction and some clarification after getting info from the team working on Adaptive Training directly:

Adaptive Training does make Progression Level changes and can result in adaptations based upon added workouts, Alternates (even when not replaced via the web process), and deleting those original workouts does NOT confuse AT!

Additionally, while added TrainerRoad workouts can impact your progression levels, these are also what future planned workouts are be based on. For example: If you select and another sweet spot workout to your calendar, complete and pass it, your custom plan can adapt based on the result of that workout. However, keep in mind that your Progression Levels are not the only driver of what your future workouts will look like.

Apologies to all for the misinformation! DELETE AWAY HAHA.

And just like that I already feel much better haha. Thanks for the update!

@IvyAudrain Is this fixed yet? Also what is the process for notifying people who have reported bugs through support that they are fixed? I have other bug reports that have gone in, but there does not seem to be a system to track when these are fixed and notify people who hve reported them. The catch is once reported, these things get closed by support. (It is closed for them, but not for developers and the user).

Last week’s example - a problem with events disappearing in plan builder. So I change an event in calendar, go into the Plan builder, but go backwards to change a prior setting - and all the events that were there disappeared from the plan builder list. So I am not going back in plan builder now, but would like to know when I can do so.

Would love to see some sort of “You reported this bug and it is now fixed”, as it seems to rely on the person in support picking it up and notifying me when it is fixed.

Is this fixed yet?

Is this fixed yet?
YES, this fix was just released!
For all web and app platforms, you can now ‘replace’ the original workout with your chosen alternate instead of having to schedule+delete when choosing an alternate. 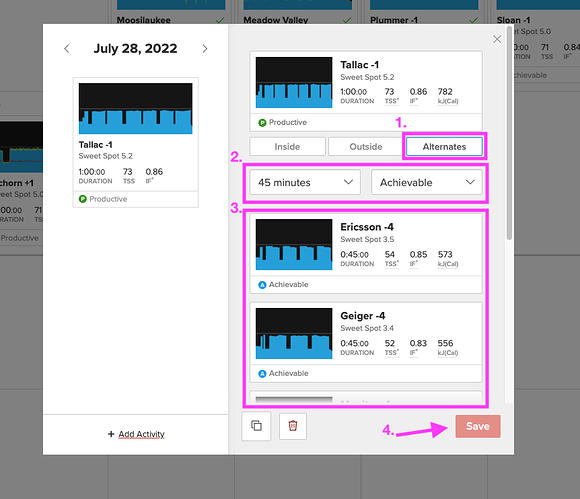 Also what is the process for notifying people who have reported bugs through support that they are fixed?

We try to track support tickets associated with bugs to alert athletes when the fix is released. The same goes for bugs reported on the forum, where we update threads with a post (and in some cases, add a ‘Resolved