Hi. I’m trying to help a friend whom I helped set up on TrainerRoad. She isn’t very technically savvy. She has been using her Kickr very successfully with TR for a couple of months now, but they have moved out of the house for a couple of weeks to redo their floors, and she just did a workout and her Kickr is now reading >500W. (I think her FTP is somewhere around 220W.) She doesn’t have another power meter to compare. She has done the spindown calibration with TR as well as with the Wahoo app. Does anyone else have suggestions or experienced something like this and resolved it? Thanks in advance. (Yes, I’ve suggested she contact support at both Wahoo and TR, but thought I’d ask here.)

Maybe try the advanced spin down: 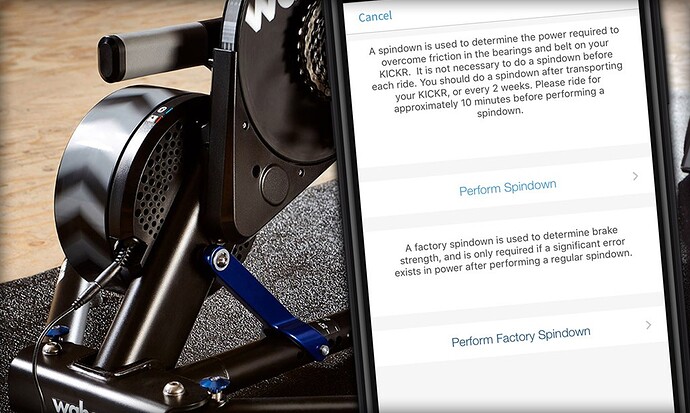 How to Perform an Advanced Factory Spindown on Your Wahoo KICKR

Has she unplugged the Kickr, waited for at least 1 minute, plugged it back in, then done a spin down?

Which generation/year kickr? The gen1 had issues with the power meter, and the gen2 and later use an optical sensor to estimate power. On the gen2 and gen3 (2017), it is possible for light reflections to mess with the power. I had a gen3 and the overhead lights were reflecting off the concrete garage floor and causing issues with power reading and Erg - solved by putting the Kickr on a Wahoo black mat.

Thanks! I’ve sent all of these suggestions to her! @AJS914 @AlphaDogCycling @WindWarrior . WIll see what she says after trying these, and any others if anyone else has ideas too!

Ok, so she tried all of these ideas but no go. She says that there’s a “brushing or whooshing” noise. Since she just moved the trainer to a new house/location, how hard is it for the belt to get knocked out of place?

Given that Kickrs are shipped across the country / world, plus my personal experience of moving a Kickr (since sold to a friend), that it must be hard to dislodge the belt. Not to say it is impossible, just that the type of jarring it would normally get from transport shouldn’t dislodge the belt.

Thanks, yeah, I already told her to contact Wahoo support, but thought I’d check in here to see if anyone had other ideas. Her wife described the noise differently, more like a “dragging squeaking” sound.