Has TR incorporated outdoor group rides into plans yet?

Hi,
I used TR for about a year and had great results on a low-volume plan. I’ve been away for 4 months and have done no structured training in that time. Before I left in June they were hinting that maybe it was going to be possible to incorporate the power metrics from unstructured group rides into Trainer Road.
So now I am back, I have started back with my local Cycling club doing fast group rides. I love these rides and to be really honest I would prefer to keep on with these outdoor group rides and not be indoors on a trainer.
I think I am asking for an unrealistic thing, but I would happily sign up again to TR if there was now a way to create some kind of structured plan from consistent ( 3 different rides per week but the same 3 rides every week) group rides.
Yours in hope, Alex

I would really love this feature, i know from the podcasts they are working on it…
I also don’t change my outdoor rides for indoor ones, and the group rides they give us a pack of skills that we can’t get in the trainer.

What i normally do is try to find a workout that is similar to the work done outside ( similar tss, duration, and work zone ), and i match that workout to the outside ride.
That way you will see some progression levels update.

Not sure it is the correct approach, but is better then nothing.

Personally I’m ok with that, as even the fast group rides are predominantly endurance/ tempo. Even the climbs and occasional sprints are so far from structured it’d be hard to see how they’d have a significant effect. Most of the progression in endurance and tempo is longer workouts (which I can’t fit in anyway)

TR (mainly @Nate_Pearson) has said people are going to be “disappointed” when this is released because most outdoor unstructured rides won’t have big impacts on progression levels. To be clear, the disappointment won’t be in the functionality, it will be with the impact of the outdoor rides. Factoring these rides into AI FTP is more important in my view, and that’s already there.

Ah yes that was it.

It’s more descriptive of your rides than prescriptive.

I don’t see how you can progress a plan that only has group rides on it.

There needs to be some form of “workout” or “goal” that would progressively increase. The idea I think is that if you do a group ride outside and it happens to have a set of 5 X 5 VO2 efforts it’ll give you the correct PL so that your next workout is at the right level.

Personally i dont see the point, group rides are social unstructured mental refreshers. If a person is focused on progression and or ftp, an event, or something else the plan is what matters.

Thanks for your input.
I know that there is no comparison to structured training to gain the right kind of fitness, I’ve done it innit.
But right now I don’t have a particular goal, and I know that the previous year all I did was unstructured fast group rides and I gave myself benchmarks, and eventually I was not dropped and my fitness grew dramatically. I did 2 events and did well, although not as well as this year after 10 months of TR…
Having said all that, it would be super interesting to see what progression levels would do by just doing only the hard group rides that I do week in week out.
Cheers all happy and safe cycling. Alex

As said, you would still see it in your FTP with AI FTP. Unless you’re actually going to use TR (indoors or out) I’m not sure that would be enough given the other indicators you could use (not getting dropped/ garmin FTP estmate etc.)

Personally, if you don’t want to do structure and have no goals, I’d just keep what you’re doing. And I am definitely not a TR naysayer!

i’ve long said around here that I think people are gonna be disappointed in their progression levels from unstructured group rides. The following is a club group ride

overall, tempoish for IF, but pretty wide difference between AP/NP

So really, not a lot of move the needle on any threshold progression level. And a lot of the ride is like that with a few mins climbing, going downhill recovery. obviously, different rides are different, but I think if you really break it down there’s not enough to impact PL, which isn’t to say there isn’t value in riding and trying to keep up with fast people, but as I see a cat 1 guy post, group rides are the junk food of training.

Depends on the ride. While I certainly have done my fair share of relaxing group rides, I also am really good at getting in over my head on group rides. I’ve certainly suffered more in races but when I actually look at the data, its group rides not races or workouts where I have really pushed myself.

Yup. Group rides around here include a lot of drop rides with regroups. Easy to find rides where you can go hard and get a strong dose of threshold and/or vo2.

So really, not a lot of move the needle on any threshold progression level.

Progression levels may not tell the whole story. 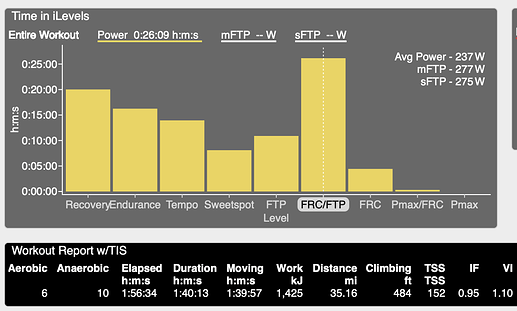 About 26 minutes of accumulated time at high % vo2max.

More than one way to get fast.

The trouble is (and I’m not necessarily saying this about your ride - just a general statement) that using Power only and a total time could be misleading about the amount of time actually spent near/at VO2max.

Obviously you know for your own riding, I’m just saying that you could hop in a group ride and do 26minutes at 400W but in 30-60second surges spaced out over a two hour period.

Here HR and breathing/RPE would be useful. But as far as PL’s or describing an outdoor ride as VO2 or Threshold it’s going to be tricky and dissappointing for some.

Yes, context matters, and FWIW on workouts like that I look at WKO’s relative vo2max for time spent at or above 85% and 90% vo2max (not shown on my pic above). I’ve found it to be a good tool for progressing vo2 work, both structured and unstructured.

You can bump vo2max and performance with 30 or 45 second full gas efforts, similar but not exactly like your 30-60 second surges. Or you can bump vo2max with vo2 intervals. I’m not sure how TR will, in the future, rate max effort sprintervals because with the current implementation if you bump power over something like 200% (? can’t recall exact %) then you get Workout Levels over 10.

But as far as PL’s or describing an outdoor ride as VO2 or Threshold it’s going to be tricky and dissappointing for some.

yes, I suspect that might be true. Will be interesting to see what TR does with workout levels v2. Right now PLs are earned based on Workout Levels, and most workouts have clear structure where WL increases are from obvious changes to structure (increasing power or decreasing rest intervals or increasing duration).

Obviously you know for your own riding, I’m just saying that you could hop in a group ride and do 26minutes at 400W but in 30-60second surges spaced out over a two hour period.

You do have to be careful about “time in zone” versus best power for x minutes. I find time in zone can be fairly worthless for analyzing many group rides as often the higher zone times are as you suggest, an accumulation of short spiky power efforts inside a much more moderate effort. Same with races. On the other hand, sometimes I really do end up with a very interval like power graph on a group ride.

Many if not most regularly scheduled group rides that the local racer crowd participates in have a very established pattern of work vs cruise efforts during the ride and you can use those to make the ride a workout. Or you can go with the next group up, hang on for dear life and go for some some Pb’s.

Im certainly not implying they’re not intense at times, but if you’re focused on something i find it is rare for them to fit in. Personally most group rides are off season or between A events. and so i dont really care about progression level at that point in time.

TR (mainly @Nate_Pearson) has said people are going to be “disappointed” when this is released because most outdoor unstructured rides won’t have big impacts on progression levels.

Even if they did I can’t see how it would make any difference. I can either finish a workout or I can’t. If I can’t AT makes it easier if I can AT makes it harder. The Progression bars reset themselves after every FTP change so it’s not like there’s a visual representation of my cumulative gains to motivate me.