It was kurt.braeckel who mentioned CFD, not me?

I brought up CFD because he discusses how Flo’s CFD modeling was incomplete and compared it to his wind tunnel testing results. That was in response to a call for data. IME, Hambini has provided actual testing data vs. CFD modeling (which isn’t data).

I don’t care to defend Hambini and there are obviously real questions about the validity of his protocol which (I think) remain unanswered, but I was simply pointing out that the only data I’ve seen in that discussion came from Hambini. Its validity is another matter… and again, I stopped tracking that public battle when it became essentially a name calling contest on one side, and the other was citing SlowTwitch posts as evidence. It seemed like neck-craning to see a car wreck. It’s possible I’ve missed quite a bit since then…

We seem to be talking past each other. There are tons and tons and tons of wind tunnel data on bicycle wheels out there, including independent testing performed by academics and published in peer-reviewed journals. That is really the body of evidence Hambini is attempting to overturn with his extraordinary claims - FLO’s CFD modeling is really just a side note.

Anyway, I agree with you that CFD modeling doesn’t always prove out in reality. Here is a recent example.

Yeah, that was why I disengaged. I was talking the Flo thing, and you were talking something else, so figured we were disconnected. No worries.

I was/am interested in all of this as I have a degree in aerospace engineering focused on aerodynamics. I am not a professional engineer, however, so I wouldn’t claim to be an expert, but I enjoy the science behind it… just not so much the bickering between involved parties!

as someone with a higher than usual level of knowledge in aerodynamics, what are you thoughts on standard linear wind tunnel flow vs turbulent flow as compared to real world conditions? just curious

My very rudimentary analysis of it says that standard linear wind tunnel flow doesn’t make as much sense at low speeds as it does at high speeds. For example, running linear wind tunnel tests from limited head-on angles at 20mph doesn’t hold as well as it would at much higher speeds, but even compared to 30mph. The faster you go straight ahead, the less the incidence angle of an equivalent wind condition, and the less impactful changes in wind and flow angles. So from that perspective, standard linear wind tunnel testing for bicycles is always going to be less applicable to real world than standard linear wind tunnel testing is for aircraft wings. From that perspective, what Hambini asserts about turbulent/transient flow conditions is well-founded in my opinion, but I have no read on his testing protocol and wouldn’t sit here and endorse his findings over those of other reputable engineers in the field. Further, some of what he says specifically about Flo’s advertised/marketed CFD modeling is correct (e.g. leaving out hubs and spokes) and certainly calls into question the science behind their design. That said, it’s entirely possible Flo does more detailed/accurate modeling and tests their designs more than the marketing material I’ve see lets on, or perhaps they’ve studied it and found the spoke/hub effects to be negligible contributors to drag relative to rim design. I would raise an eyebrow at that, but I don’t know, thus I won’t take sides in the little spat between the two.

FWIW, I discussed Hambini with a professional mechanical engineer on a bike ride a few months ago (yeah, it was an exciting Z2 ride!), and he thinks Hambini raises some really solid points if you can get past, well, Hambini. He used Hambini’s data to inform his wheel purchase. This is a successful guy who runs his own mech engineering firm, and we all know aero engineers are just mechanical engineers who specialized. Again, take all that FWIW.

thanks for the detailed response, my feeling is his points around turbulent airflow are valid, but i am just a layman in aerodynamic terms. As you point out that doesnt make his testing protocol valid, but i do feel it calls into question standard wind tunnel testing in cycling use cases

I don’t know that yaw >90* is even possible…even with a strong tailwind, your forward speed will still create enough drag that the yaw will be <90*

Well yea, that’s what I was trying to understand, how that sailing argument fits in with hardly anything to sail on. @old_but_not_dead_yet cleared that up with the article above, cheers!

“I can conceive of a very narrow set of circumstances where you may, perhaps, be able to tip the lift from a disk wheel (the side load) into a more forward trajectory”

So you recognize that what has been experimentally observed is, in fact, theoretically possible. Wonderful.

If Hambin’s claim are valid, then why doesn’t CdA vary significantly with q? Presumably residual turbulence would have a bigger impact at lower than higher speeds, but lots of people have reported a tight linear relationship between drag and tunnel speed.

If Hambini’s claims are valid, then why is it still possible to accurately predict the power required to cycle outdoors in highly turbulent air from wind tunnel data in much less turbulent flow?

If Hambin’s claims are valid, then why doesn’t pedaling cadence have any measurable effect on CdA? Surely whether your legs are turning at 90 rpm versus 30 rpm would magnify the sorts of effects he has focused on.

America’s Cup boats have rigid sails and they go pretty damn fast…and while you may not be able to orient a disc ideally relative to the wind to achieve maximum benefit, it doesn’t mean there still isn’t a sub-optimal benefit to it.

We seem to be getting tangled up in terms…call it whatever you want, but the net result is that the higher the yaw, the more aerodynamic benefit a disc wheel provides. The data bears that out.

Get a disk cover and experiment. Buy the disk if you decide to go all in. 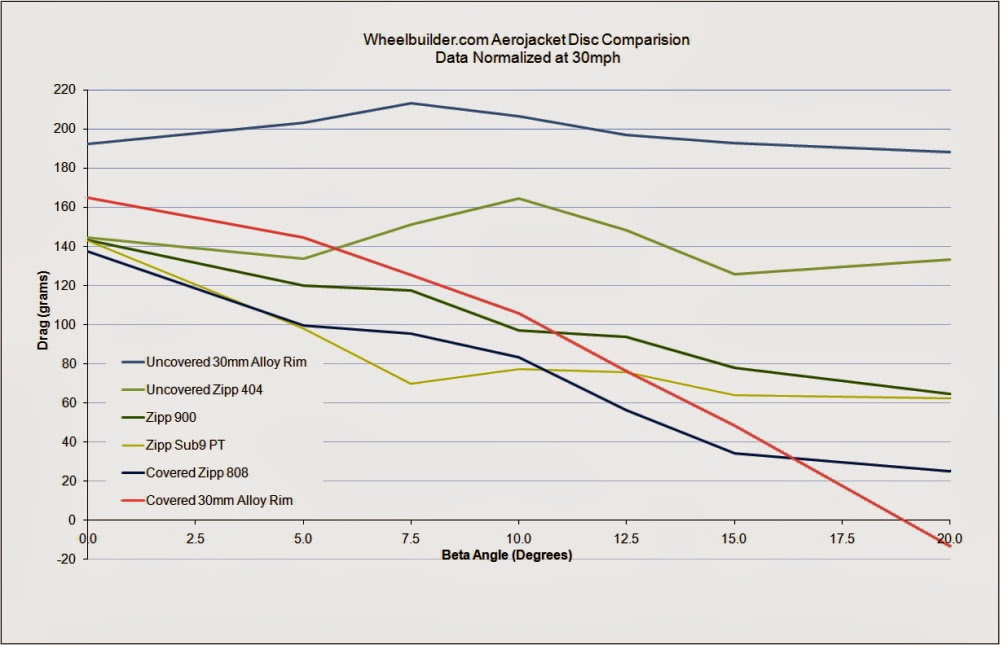 I don’t have an answer yet, but new 90/90s will arrive this week and I’ll then be Chung-testing the 90 rear vs. disc cover on my tri bike. If others do the same we might be able to generate a meaningful data set?

So did you ever do your Chung testing on this? If so, what were the results?

I did one testing session, but the results were inconclusive at best. I’ll have to get better at testing and find a more suitable location. I’ll try again next year and report back!

This article suggests that a rear disk wheel in real world testing is more stable than a rear deep section. It seems to concur with ME; I have only ever had a problem with the front (deep section) feeling unstable in strong winds. The article has a few other wheel related things:

How wide is too wide, is hookless pointless, are carbon spokes worth it and what aero innovations are coming next? We ask Parcours’ Dov Tate the big questions about road bike wheels | Cycling Weekly

Because you move the center of pressure further towards the back of the bike, away from the steering axis compared to when you would run a 90/90 combo for instance.

For a given force caused by the wind (speed), a disc rear wheel has a larger surface which results in a larger force on the wheel. The force arm is longer towards the rear so this causes a larger moment around the steering axis that stabilizes the one caused by the deep front wheel.