Calculating LT1 and LT2 approximately without a blood test?

Did a LSD ride yesterday and was for most of the time above 1, although I was around 140bpm of 195 as max.

Not sure if the is working for me.

Did a LSD ride yesterday and was for most of the time above 1, although I was around 140bpm of 195 as max.

did you mean DFA-a1 was mostly above 1 at that HR?

If so then I’m not surprised. My max HR is 188 and HRV Logger and Fatmaxxer both put my DFA-a1 point at 154bpm. Thats well into my tempo zone usually.

Yesterday I did some 100% FTP intervals and an extended cooldown. A minute or 2 into the cooldown I thought it might be interesting to see how DFA-a1 might be affected by all the work done during the main session so fired up Fatmaxxer and watched the results. The HR for 0.75 was the same as during the step test, but obviously the power that hit that caused me to hit that HR was significantly lower after the intervals.

Just confirms that obviously on longer or interval rides you need to take into account the drift in power:HR over time and pay attention to HR rather than just the power numbers.

Not sure if the is working for me.

If I get it right, intention of doing LSD at or under LT1 HR is to minimize accumulating fatigue over longer period. You might not see effect after single workout. Rather cap all your LSD rides with LT1 HR and then compare your fatigue just before going into recovery week.

I myself am not interested in realtime HRV dependent capping. Will do every week one test, calculate HR with DFA a1 and then cap rest of week’s Z2 workouts to this value. So far have done 2 tests:

It is quite a fluctuation, let’s see how it progresses over base phase.

My Alpha 1: Only got close to the 0.75 when I was actually at what I consider FTP.

Maybe try longer ramp steps, like 6 or 8 minutes? According to DFA a1 FAQ, start with 20min warmup and only then start logger with first step. Keep increasing power with 6min/10w steps until value is clearly below 0.75 and then continue with another step to confirm that you really are below 0.7 and previous step was not temporary fluctuation.

Warmup step is at 50%, each step +4% and final step is 82%. I start logger with first step and stop at last, before cooldown. Nice and easy workout between SS days

It’s recommended to include a step where you cross threshold. There are ppl with LT1 very close to LT2.

Thanks a lot, will try next week.

There are ppl with LT1 very close to LT2.

Unfortunately that’s not the case for me personally, calculated LT1 is at quite low Z2 (~65% of FTP). This is weird, because outdoors I usually ride 4-6hrs at 70-72% of FTP with zero cardiac drift and at suggested HR cap it is even negative -1.4% for 2-3 hours (indoors)

Nevertheless, I’ll keep my cool and see where it takes me over next 12 weeks.

yep - definitely do longer . steps to allow levels to stabilise. Marco suggests 6-8 min steps and every time I’ve seen people here use shorter steps they also seem to get strange numbers. Have a look at his suggested protocol in this post.

For all of these tests, very much need longer times at each step. Throw away anything you have read or done with three minute lactate (or other) tests with short times at each power level.

For LT1, this power level is well within the ability to ride for a long time. Set up a workout with 8-10 min steps with 10 watt changes. Do the ride as a workout and get good data.

I don’t like to test much. So if I’m going to test, I try to make the protocol rock solid. Saves time in the end.

I recommend you guys do this test by HR rather than power.

You can start with an estimate. San Milan suggest the talk test. Seiler recommends 65% of HRmax.

Warm-up, get your HR in that range and see where DFA a1 is. Go 5 beats higher or lower depending on the reading.

Once you find your DFA a1 heart rate, you are there.

I’ve found that actual power at DFA a1 will fluctuate with freshness. If I’ve had a rest days or some easy riding prior, I’ll get a higher power at DFA a1. If my legs are cooked, I’ll put out 20-25 watts less at DFA a1.

I used DFA1 to get an indication of LT1. Both via slow ramp and confirmation via steady state. I also pay attention to RPE and talk test / breathing during these rides.

I’m not doing any high intensity at the moment. My main event isn’t till August so I have time to see how well this works before I reintroduce intensity. High intensity will be back in March.

I am due my 4 week retest on the turbo this week. The results of my regular routes is that I’m seeing clear improvements in average speed for the same HR. I am also able to push higher gears and stay below my LT1 HR

Phil, I did this exact experiment a couple of years ago with the same kind of results. After 6-7 weeks of this training, I was breaking Strava PRs left and right and riding stronger than ever. I continued this type of training for 13 weeks, peaking at 13 hours per week, and unfortunately didn’t see further gains.

I’m happy with the experiment but really wish I had switched gears to a sweet spot or threshold block after the 7 weeks.

This kind of training definitely increased my durability and overall endurance.

Hello,
in my DFA Alpha 1 records i can see some extrasystoles, especially when my puls / power changes (goes up or down). In this example i did a 3 minute All-Out effort.
The green line is the power output, and the black dots are the RR-Intervals (millisecounds between heart beats).
Still have been at the doctors and everything should be ok so far with my heart. Extrasystoles are “normal”.

If you have a garmin 1030 you can use DFA Alpha1 IQ connect to show the value on your garmin screen.

Someone just released a Garmin data field if you want to more easily track alpha 1 during a workout:

alphaHRV is a DataField that performs real time DFA analysis of heart rate variability (HRV) during your activity. It provides alpha1 parameter, showing its evolution during the last 2 min of the activity. Alpha1 has been correlated by different...

Fractal correlation properties of heart rate variability as a biomarker of...

The aim of this report is to evaluate the change in exercise associated DFA a1 dynamics toward the end of a simulated ultramarathon and compare this to changes in HR and running economy while still p...

Another reason why I’d love tr to be able to do the recording and calculations in the app to help train the model. (Not saying it should be exposed in the UI as I do see the issue with overwhelming the user with data for those who aren’t data geeks) 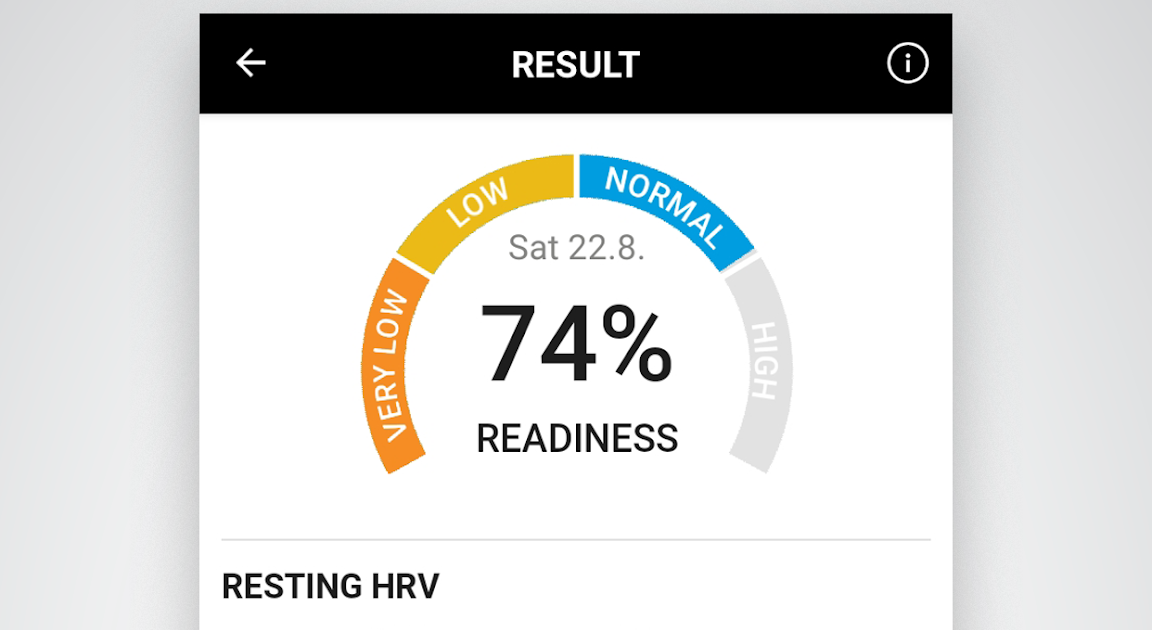 To train hard or not, that's the question

We introduce HRV readiness to train and a durability metrics based on DFA alpha 1. Monitor your recovery and cardiac drift.

@Nate_Pearson what’s the chance you could do this in tr? Could be useful for red light/green light, well to end the workout early or flag that the prediction was wrong if they got a green light

Doesn’t TR need to be recording RR interval first? I thought that they had updated it to record it, but I didn’t see it when looking through the settings the other day. My .fit files exported to garmin don’t have it, so Kubios cannot do any analysis on the TR files.

You can start with an estimate. San Milan suggest the talk test. Seiler recommends 65% of HRmax.

these are too vague or too low. Better to do the ramp test.

I’ve found that actual power at DFA a1 will fluctuate with freshness.

This is true and very key, but with enough long sample you get a sense of the range.

They don’t. This is not really a simple ask as getting good data isn’t simple.

-have to identify which strap is being used to record with. Mix of a UX problem in telling users which brands they should buy and a data issue to handle the data from different sources differently

-positioning the strap is not so easy. Need so way to inform users that while they get good hr data their hrv needs better positioning

That’s all before doing the actual calculations are done

does apple support ant+? Samsung does not any more, so I needed to upgrade to a Bluetooth strap just to get hr data after upgrading from my old s7. I say this since tr is talking about using hrv, but the reality is that they are probably a long ways off.