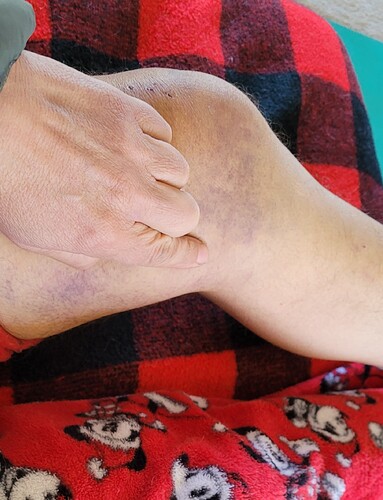 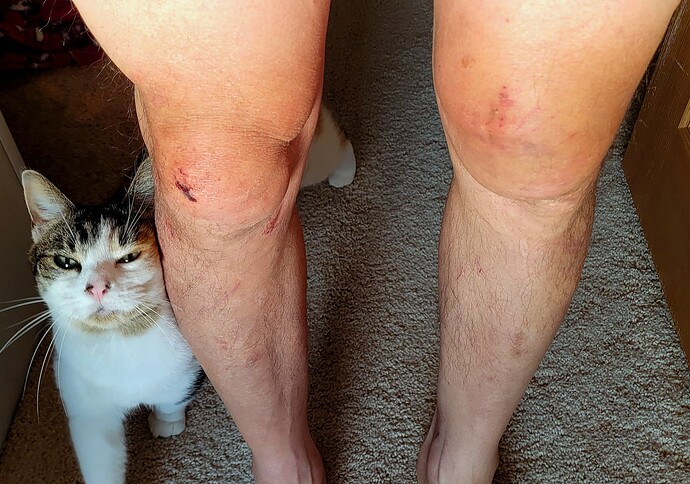 So i got a little bruise on my knee. And its got me wondering what kind of damage has been done to the muscle. All in all im not in much pain except when i try to bend the knee because of the swelling. Of course the first day it hurt like hell and is still tender to the touch. Btw pictures do not do all the pretty colors justice! …back to the damage how long does it typically take to recover from something like this. Its been a week since this happened and im no longer walking like a peg leg. But im most curious what kind of damage happens to the muscles on this type of bruise. Its from the handle bars of my mtb, sudden unplanned stops will do that.

In my medical opinion it will have to an amputation, in other words I’ve no idea and it will probably be very individualistic as what the bruise means

My approach in a similar situation was just going by pain for getting back to activities. The bruising takes awhile to go away; I had an imprint of my handlebar on my leg for the better part of a year (though that may have been more of a burn, went into the side of a car at ~24 mph).

As far as the damage, whole bunch of ruptured blood vessels. Probably some other mechanical damage to the muscles themselves as well but that’s getting above my level of physiology. Should heal (a lot) faster than tendon/ligament damage.

No advice on the recovery, but I think you need to teach the cat not to rub so hard.

Bruising in and of itself can take quite a few weeks to disappear.

Fortunately, overnight bruising did come out and the legs could move a bit again and things steadily recovered over the next few sleeps. So in my non medical opinion bruising is just a sign your body is repairing. Whether that process of repair would be just as fast for me 15years later is an experiment I don’t want to try.

I had a couple of crashes this year where the bruising took about a week to “show up” and then probably another 1-2 to fully disappear, though most of the swelling/stiffness disappeared after the first 4-7 days. Both times I landed on a shoulder/hip joint- I think that kind of bruising can go pretty deep, especially when you think about the kind of forces involved.

On the advice of my doctor/coach, I took it pretty conservatively and let pain/ROM be my guide- once things felt like they were structurally okay I started some short z1 spins, and slowly increased volume/intensity by feel as things started to free up. (I think light movement can definitely help in that regard provided there’s no underlying injury, but definitely see a doctor if you have any concerns)
I didn’t do any hard sessions until I was 100% back to normal, but that might have been as much mental as physical.

Disclaimer: I’ve had issues on and off with low iron so it might have been more pronounced in my case, but I’ve never really had issues with excessive bruising.