Had a stupid training ride accident 2 weeks ago and broke my clavicle. In the ER they said it was bad but still decided not to do surgery and let the body do it’s job. Today got another x-ray after 2 weeks and the orthopedist says there is a 50/50 chance of non-union.

He suggest to wait 4 weeks then do surgery if need be but also said we could do it now if I decide so.

I don’t know what to do…. I don’t have much pain and can perform all my work duties (computer).

What would you do?

Here is the x-ray 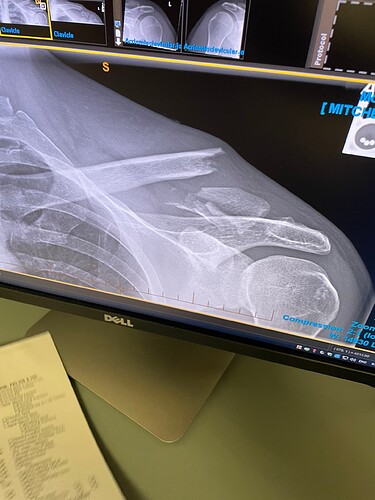 Personally, I’d have the surgery. I broke my clavicle (worse than yours looks) and had surgery as soon as the road rash healed. My friend broke his less severely and never had surgery but had longer term issues (ROM related, iirc, this was awhile ago but he had wished that he had surgery). Only long term issue I’ve had is the skin above the screws can get irritated if I wear a heavy messenger bag for awhile.

In my case the ER opted for no surgery and when I went to an ortho a few days later he had it scheduled asap.

Another +1 for getting the surgery sooner rather than later. I’ve broken both of mine into multiple pieces. For me, having surgery significantly reduced the recovery time and the pain level.

Only long term issue I’ve had is the skin above the screws can get irritated if I wear a heavy messenger bag for awhile.

This was an issue for me as well, on both sides. I wasn’t able to wear any sort of backpack or other item that resulted in putting weight on the titanium plate. It felt like pressure was going through the screws used to secure it to the clavicle, causing significant discomfort. To fix this problem I’ve since had both plates removed and can now wear backpacks, hydration packs etc… again.

The primary long-term problem from having surgery for me has been a loss of feeling/sensation across a large portion of the chest/shoulder area due to where/how they had to cut in order to perform the surgery. It’s like permanent pins and needles, which I find more of a problem at night-time as I’m a stomach sleeper. 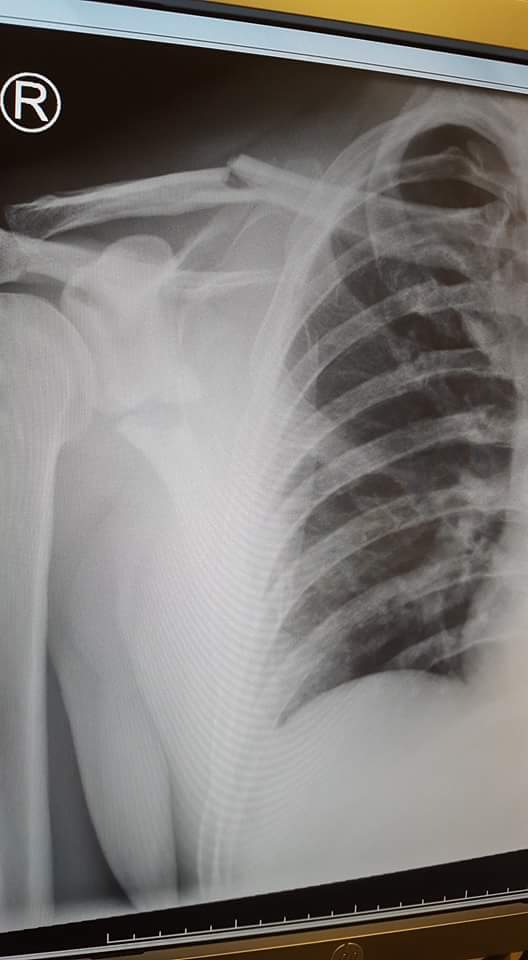 I’m a pretty conservative orthopedic shoulder specialist. But if that was my shoulder, I’d find an experienced shoulder or ortho-trauma surgeon and get that fixed.

Ouch heal well! A surgeon mate of mine reckon I broke my shoulder or collarbone at sometime. Given how its clicked overtime and can occasionally be sore (especially on long TTs) and looking at your xray in my non medical view I’d get it sorted if I was you.

I had a similar break. Had surgery the day after, by a very experienced orthopaedic surgeon. Was in pain and cannot use the arm otherwise. Healed well. The long term minor issue, as mentioned by others, is heavy backpack would press on the plate and cause noticeable sensations on the shoulder skin.

The pins and needles Nicholas mentioned… Nerve been displaced during operation or maybe the accident it self… I experienced for first few weeks after surgery. But it went away. Now have normal feelings of the shoulder skin , etc.

Hope you get better soon. 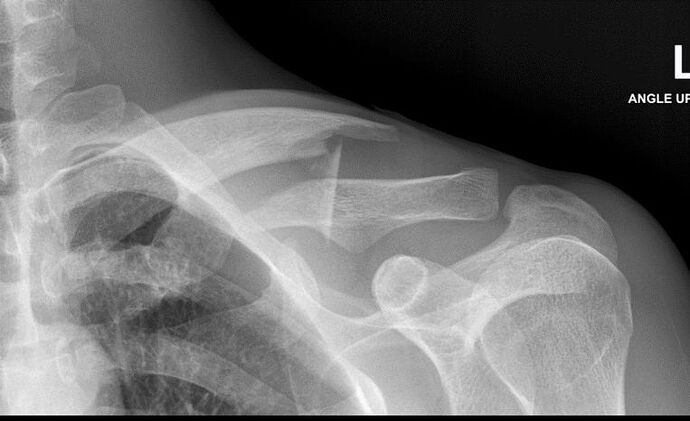 Also not an orthopedist, but in my experience the ER is not the place to listen about surgical or non surgical decisions. Those docs are there to triage and determine if surgery is indicated RIGHT AWAY or send you home in stable condition.

Listen to the ortho - wait a few more weeks and then see. If they thought it was an emergent issue that required surgery they would tell you.

Everyone else is an N of 1. I have a riding buddy who had an X-ray like that after a MTB crash and he ended up not getting surgery and now is fine/no issues and is 70 years old.

The long term minor issue, as mentioned by others, is heavy backpack would press on the plate and cause noticeable sensations on the shoulder skin.

I don’t know the medical details, but I found it interesting that Tom Pidcock, who broke his collerbone earlier this year and was back riding a week later, just had the plate taken out again.

In some cases - people can have discomfort associated with hardware.

Hardware allows you to get back on the bike or your feet much quicker because there is stability in the hardware even if the fracture isn’t healed yet - but if it begins to annoy you (might be rubbing on other more superficial structures) it can be removed at the patient’s discretion.

Again - not an ortho.

Age and risk of surgery? If its low risk for you the less postponement of the surgery the better for long term healing perspective.

You can remove hardware: 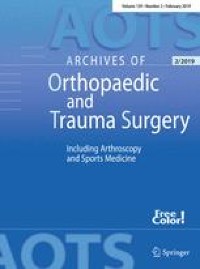 Does implant removal of superior clavicle plate osteosynthesis affect the...

Background Elective implant removal (IR) accounts for up to 30% of all orthopaedic surgeries. While there is general acceptance about the need of implant removal for obvious reasons, such as infections or implant failure, little is known about the...

The rational answer seems to be to get the surgery. But, I am terrified of going under. So in my case I might be inclined to do everything I can to avoid it.

This might be a silly question, but have you immobilized it? Are you wearing a sling and figure-8 strap to keep everything in place?

Years ago, I broke my left clavicle, x-ray looked like yours, wore a sling for 6 weeks and it healed. It’s still lumpy, but it works.

A few months later, I broke my right clavicle, and I thought I knew the drill. At the time I was driving a stick shift, working on a computer, etc etc, and I didn’t really immobilize it at all. A couple of months in I had a “fibrous union” where the bone was joined but flexible, and I ended up getting surgery. I had a pin instead of a plate, which was removed later.

TLDR: if you really don’t want surgery, immobilize it so it can heal!

Not a medical expert.

I did break both shoulders simultaneously.

I don’t remember any downsides from surgery?

I had the surgery on both shoulders in the same operation, one collarbone plated, one shoulder joint stabilised. I haven’t needed to have any metalwork removed.

I was very careful to do whatever the physio recommended.

Best of luck with whatever you decide.

Yeah I a normal sling they gave me but bought a better one but not an hexa-thing.

I wear it all the time but use my hand to work on my computer, resting my arm on the arm rest for support. I do wonder also if it’s enough…

Is it under general anesthesia? How long off-work should I plan? 2-3 days?

Same. Don’t know why but it’s a big deal for me also….

Is it under general anesthesia? How long off-work should I plan? 2-3 days?

Yes to the former. The latter wasn’t applicable to me at the time but probably a couple of days? I slept very poorly the night after it but otherwise probably could have worked if I had really needed to (at a desk job). My shoulder didn’t hurt drastically more than it already was before the surgery; the anesthesia after effects were what I struggled with.

Figure of 8 straps were abandoned years ago. They don’t work better then a sling