Base phase repeat and matching TSS-levels

So I’ve decided to pull out from racing any more this season and focus on what I’ve should’ve last year meaning building a stronger aerobic engine and change body composition.

Now… I’ve decided to start base-training with SSBMV starting today. However as I plan to peak late June 2020 I’ll be doing a repeat of SSB I/II before starting build. Might even have to do something in between.

My real question here is what I should do in regards to TSS. I’ve been training at around 70-75CTL (roughly 500-600TSS) a week almost always doing at least one indoor interval session but more often twice a week.

The medium volume plan isn’t really there TSS-wise. I’m not sure that I’d get the proper stress that I need to progress.

I was thinking about adding Taku or some other low intensity workout every morning just to up the TSS and get the proper calorie deficit that I need every day. Not sure how much time I can spend outside this winter so I’m basing all my TSS on indoor rides which probably won’t cut it.

Should I do SSBMV I/II and repeat SSBMV I/II again or do SSBMV then up to SSBHV? Not sure about spending 2hrs on the trainer. I just did a couple of 2hr workouts and by god they really suck the life out of me. 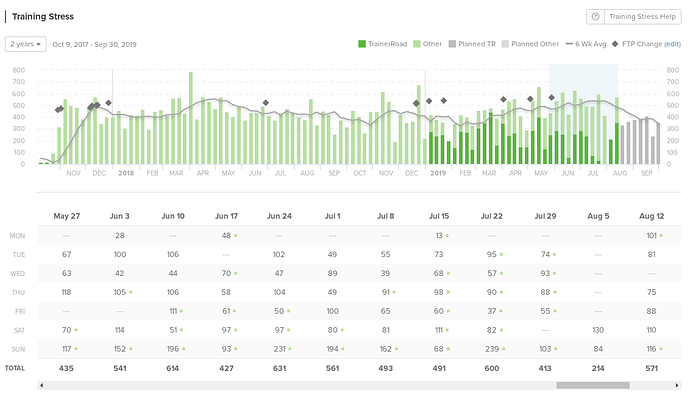 Do the first few weeks of SSBMV and see how you are responding. If, any only if, you are adapting well and feel fully recovered, should you consider adding additional rides

If you get that far and want to add some TSS fillers then I’d suggest you’re better off extending the rides already in the plan. Add 15 minutes at an endurance pace to the end of a few rides each week and you can pretty quickly get bonus TSS and kJ

Yeah thing is I’ve yet to feel fatigued or burned out from training so I think that I might add more volume once I evaluate the first base-period.

Extending cool-down is a great way to work when you’re tired and is customizable based on how you’re feeling on a given day. I’d still recommend you wait until you’ve done a few weeks before you start playing around with it (it is far easier to dig yourself into a hole than it is to dig yourself out of one)

My concern would be that you’re used to 500-600 TSS and that’s where you start, you’re likely to end the year much higher, and I’d be afraid you’d add too much stress too quickly, burn out or get hurt halfway through the season. You’d be better off doing what @trpnhntr suggested and adding 15 min or more aerobic volume each ride via the +cooldown feature. You do that a few times a week, and you can easily add 30-50TSS in a not-to-stressful manner that will pay dividends over the course of the season.

I might dial the TSS down a bit anyways because I’ll be focusing two days a week on strength training. As for TSS accumulation I was thinking about adding Taku or Carson as morning rides during weekdays. But I might also be overdoing it, that is a tendency that I have and that can’t be overlooked. This was my second season riding and second season competing so basically I don’t know what works for me yet.

I do feel that I’m quick on the recovery-side though because I’ve never felt my legs or heart giving up on my on back to back sessions and weeks with high load.

It’s tough for us to be objective with our own training. We always think we can do more, especially early in our training/racing careers. That’s where a coach (or an objective forum member!) can help. Almost 100% of the time discretion is the better part of adding more volume/intensity.

Ok makes sense. I had a similar situation last year where I couldn’t ride outside for 7 months. With no events and no outdoor riding to disrupt my training, I adopted the approach you’re describing. You can see my FTP progression here with the training plans I followed (I marked the data points for the FTP test I did after the completion of a training block, rather than at the beginning as it appears in the plans). [20%20PM]

@julianoliver has a great example of how repeating SSB1>SSB2>Sustained Build without worrying about total TSS can bring big gains. Your body and mind will only benefit from the chance to reset and refresh during the lower TSS of SSB1, and you’ll probably be more focused each time you hit the build phase. Without a major target event, I’m planning to try something like this for 2020 and will eventually share my results as well.

For sure. I have time. It’s just the patience part I’m lacking.

@cjjoefro thanks for the feedback and the link. I’ll check it out!

Today’s ramptest landed at 282W which is 1W less than 28:th of May before XCO speciality so I’m pleased with not having to start over. I’ll give it all a go and see where the first SSBMV I/II takes me. Hopefully in the right direction.

Reviving my own thread here. But has anyone repeated SSBMV back to back? I will be doing that twice before starting a build-plan I’m thinking that should be better than doing SSB > Build > SSB > Build > Speciality.