Why I'll be cancelling my FloSports subscription

These guys suck on a level that just can’t be helped. You want to watch any race, and unless its live this is what you have to deal with to actually get the replay.

Thanks for the spoilers… 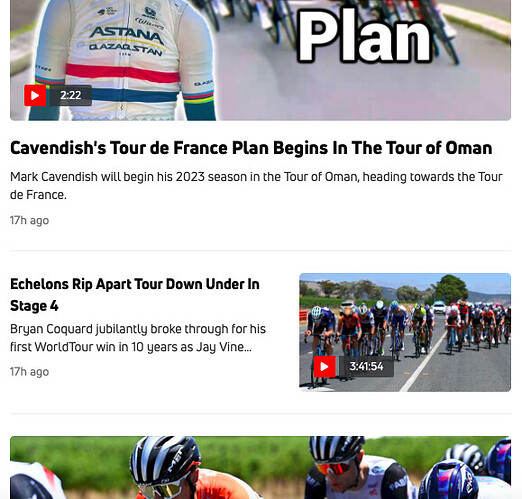 Sadly they’ve been doing that for years. I’ve emailed them in the past myself complaining about the spoilers, but GCN is a better deal anyway. I’m not sure how Flo stays around.

One of the streaming services used to send emails with subject lines like “Cav hangs on to win Stage 6”.

On NBC when you’d logon to the EPL coverage would have videos with titles “Highlights of City’s win over Arsenal” as the first thing on the page. But they seem to have finally fixed that.

FLO Sports is so much hot garbage. Ridiculously overpriced, inundated with advertising (so why am I paying so much?), largely devoid of decent content and riddled with spoilers.

Back when they had the Giro and the RCS races and was ~$50/ year, it was actually quite good. But that was 3-4 years ago….

I don’t like paying for Flo either, but love watching the Cyclocross World Cups in the Fall/Winter. GCN has great CX coverage, but unfortunately the World Cups are only on Flo at least to my knowledge.

I finally ditched Flo after they spoiled every single race of UCI road worlds last year. I started using NordVPN with GCN+ and the two combined are cheaper than Flo. Looking at the calendar this year, I don’t think there’s any road or cross race that GCN doesn’t have rights for in some country.

Gcn with a vpn has all the cross.

And that combo is cheaper than paying for FLO.

I think the GCN app sent me the same spoiler of TdU stage 4; they didn’t say who the winners or losers were so I didn’t mind

Are there still plans for GCN to create a Roku app or are we forever forced to airplay from our phones?

Two years ago it was a few weeks away. If they can’t get it done with the backers they have, they don’t want to get it done

I cancelled Flo for this reason among others. Complained about it years ago, they clearly don’t care.
GCN + vpn works for me (surfshark is pretty cheap.)
I have had some issues with the VPN on android, but web and iOS work great.

I subscribe to Flo (and GCN+, and Peacock, $$$) and typically use the casting feature to show the race on a TV. Does anyone know if this would work with these VPN services?

It has not worked for me, and I don’t think it will in general, as the way it works is the chromecast device itself streams from the internet. You would need to get both the chromecast and your phone to be on the VPN for this to work.

No your best bet is to get a cheap firetv stick. Firetv has apps for all the major VPNs and has the GCN app.

You can make it work if instead of casting from the app you cast a tab from
Chrome while your laptop is on the VPN but the quality will suffer.

Sounds like it depends on your exact setup. With the NordVPN and GCN apps on my iPhone, I’ve been able to airplay it to both an Apple TV and a Samsung smart TV. If the race is available in your country, you can just use the native GCN apps on Apple TV and Samsung.

Wow, just looked and indeed surfshark supports the firetv. I might have to do that - thanks for the tip.

I agree with everything said, but I keep my subscription in hopes that the coverage of North American races helps our athletes. I hope I am not just being Naive.

I avoid spoilers by only looking at the feed time in the corner and this tells me which one to click on. I almost have the race result spoiled this way. I hope this helps someone

Sounds like it depends on your exact setup. With the NordVPN and GCN apps on my iPhone, I’ve been able to airplay it to both an Apple TV and a Samsung smart TV. If the race is available in your country, you can just use the native GCN apps on Apple TV and Samsung.

Really depends on your router setup. If you have an asus router look into something like merlin-wrt and it allows you to basically VPN off the router not just the end-use device like the TV or phone. 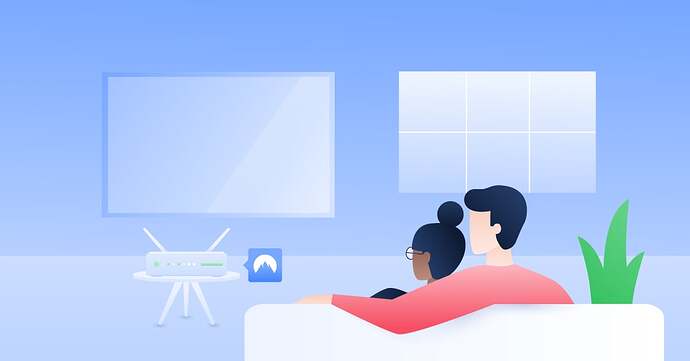 How to set up a VPN for Apple TV

Did you know that you can set up a VPN for Apple TV (or any other WiFi-connected home media device)? Find out why you'd want to and how to do it!

I used to subscribe to FloSports too. Not until GCN started to create a subscription too. I switched to GCN mostly because they have a better commentator and more access to races. The price is cheaper than FloSport, but I got lots of bike races. Not just the major one. I would suggest you also subscribe to VPN, to open up more races. GCN + VPN access = every single racing on the planet earth that they offer, from road racing (WT race and non-WT) to cyclocross, to MTB to track. If I total the price of my subscription for both, it’s still cheaper than subscribing to FloSport with limited coverage and sucks commentator, If you just started to subscribe to GCN, you made the right choice.