Why do career progressions reset after FTP Test?

Did a second FTP ramp test last night. After it changed my FTP I noticed it reset all my career progression levels to 1. Curious why this is? Doesn’t seem like its a huge deal but I feel like they shouldn’t reset for some reason just because my FTP increased by a small amount.

Contact Support@trainerroad.com, a decrease in progression levels is expected but they shouldn’t be resetting to 1.

Here’s my levels from the last workout I did pre new FTP, since they’re all pretty low no surprise that they all got bumped down to 1. 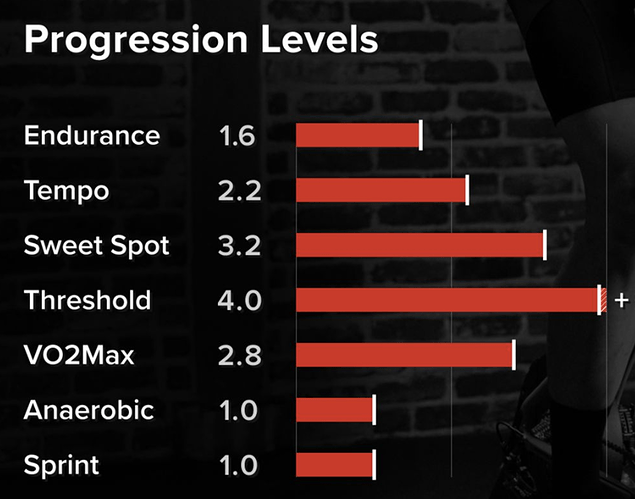 Also hard to know what you mean by small amount. I would guess that the larger the increase the more it’s going to reduce your levels to smooth the transition.

Edit: picture posted while I was typing. That’s not a small bump in ftp, especially by percentage. Not surprised it was reset that far.

Same here - Coming back after 6 months off the bike. Ramp Test 196w, starting to feel the workouts are becoming to easy as my body is adapting to the stress again, in week 4 of the Base I training plan. Then used AI to calculate FTP at the start of week 4. 208 is suggested, but as OP mentioned: progression levels all back to zero, which is kinda understandable to counterintuitive. But what is worse, TR has is now suggesting work-outs that are quite a lot lower in intensity and TSS, I was expecting the exact opposite.

Yep the change in workouts is my main issue with it. Luckily I’ve kept turning down adaptions everytime it asks so hopefully after a couple weeks of workouts they’ll be at a similar level to what they were before. I’m sure I’ll accept a couple ones but will have to change them manually as I’m not sure if there’s a way to just accept one.

If you want to continue at the level you were at why not just choose an alternate workout that is at or above the level you previously achieved? If you have no issue with it, it will bump your progression level right back to where it was as you touch on each system.

If AT didn’t lower the PL after a FTP bump - ouch that would be harsh, the wo would be too difficult.
TR expects you to train up into higher PL ~ let’s say at least PL 5 before bumping up FTP.

Unfortunately, AT and aiFTP don’t know if you found your right FTP and PL . If you’re starting (or coming back to) structured training, it takes several weeks to find the right balance of challenging but doable level. TR errs on the side of being easier at first so first wo will feel easy so you won’t quit. Afterwards, as you answer survey, AT will ramp up the PL. You can accelerate the process by picking tougher wo than what AT suggests. At some point, you’ll pick more than you can chew and that’s ok.

I’ve been guilty of accepting aiFTP bumps up too often. AT first it was the right thing to do but later on i should have waited until i increased PL.
If you bump it up, your PL get nerfed by ~2 and there’s no undoing even if you bring back your FTP down right away or contact support. The fix is easy to bring them back up: just pick stretch/breakthrough wo for next few weeks.
In your case since you had a large % gain, it nerfed them by 3 it seems
.

I will do exactly this - stay on the same FTP and bump up the Difficulty of the workout by picking an Alternative work-out to Stretch instead of Productive, until the next test. Still I then expect the workouts to be on the same TSS and intensity level, like Tunnabora and not “going down” to Tunnabora -2…

I read somewhere else that it could be that your data (I have TR data going back to 2017) could need a repair, anyone experience with that?

Same here - Coming back after 6 months off the bike. Ramp Test 196w, starting to feel the workouts are becoming to easy as my body is adapting to the stress again, in week 4 of the Base I training plan. Then used AI to calculate FTP at the start of week 4. 208 is suggested, but as OP mentioned: progression levels all back to zero, which is kinda understandable to counterintuitive. But what is worse, TR has is now suggesting work-outs that are quite a lot lower in intensity and TSS, I was expecting the exact opposite.

Only having 3 weeks of ride data within TrainerRoad prior to beginning your plan, it means your Progression Levels didn’t have a lot of context initially. With only 3 weeks of data, you went from level 1 to level 3. With the 6% bump in FTP (nice!), we drop PLs down to keep the glide path smooth.To address your ‘intensity’ concerns: The Workout Level or ‘difficulty’ of your workouts are increasing with your increased FTP.

For example, looking at your most recent Adaptation history, workouts like Sill (Threshold 3.8) were suggested to be adapted to Columbine -2 (Threshold 4.0 ), and Ritter (Threshold 3.7 ) to McAdie -2 (Threshold 4.4 ) tells us that AT is calibrating your workout difficultly post FTP change as it should! You’re doing great in those workouts so AT is moving your forward and challenging you appropriately for those future workouts. You’re all good!

Thank you! Much appreciate the in depth reply. I really love this approach as contrary to other training tools it takes training progress into account and adjust accordingly during your plan. Which is the main reason for choosing Trainerroad. Keep up the good work!

I did reset my FTP, back to 196 as per the test 3 weeks ago, and trust that the adjustments facilitate the adaptions. I am really curious what the suggested workouts will be as I start my Build I phase. I might come back.

Did a second FTP ramp test last night. After it changed my FTP I noticed it reset all my career progression levels to 1. Curious why this is?

Just echoing @madgame3 here that that even a small FTP update can recalibrate your Progression Levels to decrease a bit, especially when your levels aren’t super high to begin with.
What’s more is that you experienced a significant FTP update of almost 30 watts (nice work!), so while your workout difficulty will increase as a result of that, your PLs look normal based upon that big update.

Everything looks great on for your levels as you’re getting back into things, it wont take long at all for AT to reflect your new found fitness. Keep up the good work!

FTP increased by a small amount

i would guess that even a 1 watt increase would nerf your PL.

Easy way to check, update your FTP and find out.

I understand curiosity may get the best of you here, but we don’t recommend changing your FTP history to run a ‘test’ liken this. Resetting or modifying your PLs as a result of a hypothetical change won’t give you the best training outcome. I know it’s tempting, try to resist doing that.

I think this might boil down to being at a lower level than before and considering a lower FTP a smaller FTP, so a “small” improvement (though big like for instance 20w, amounting to 10%), in relative sense is still small as long as it’s no where near what was done in the past. At least that’s how it works for me…

I agree running tests against AT would not be advisable and probably violates some user agreements.

On the flip side I feel pretty confident that a 1w increase won’t derail anyones training plan, and AT and progression levels would be just fine.

Hope you feel better and good luck with your cross season!