What Beer are you enjoying? 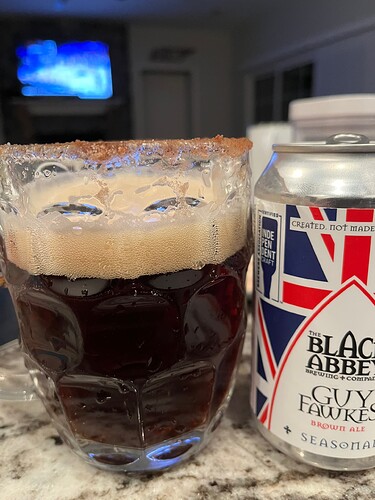 Black Abbey Brown Ale out of Nashville, TN. Not bad, but not great either.

For those that don’t frown upon it, for brown ales and pumpkin ales, if you add a mixture of cinnamon and sugar on the rim of the glass you will have a dessert beer superior to any dessert food you could think of. 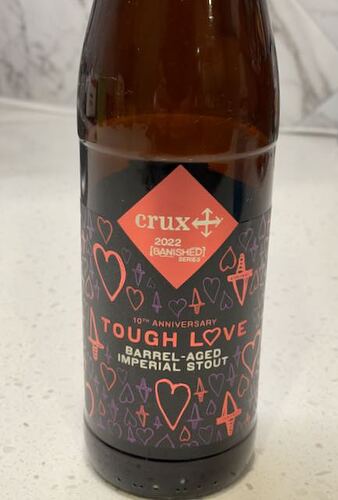 This my friends is a proper beer. Chocolate, coffee and dried cherries. Thick and black with a beautiful, brownish head. Sadly I drank it all before I took the photo, so I couldn’t show you it in all its wonderfulness in the glass.

Sadly I drank it all before I took the photo, so I couldn’t show you it in all its wonderfulness in the glass.

another round of Seismic Brewing’s Megathrust, almost gone before the sushi arrived: 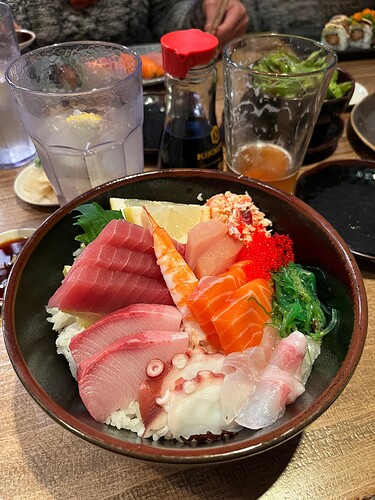 Hiding under the sushi is a mega pile of rice for the carb loading!

Tonight’s selections….the Chouffe was OK, but my least favorite of the 4 that came in the variety pack. Had that classic Belgian yeast / banana flavor to it. 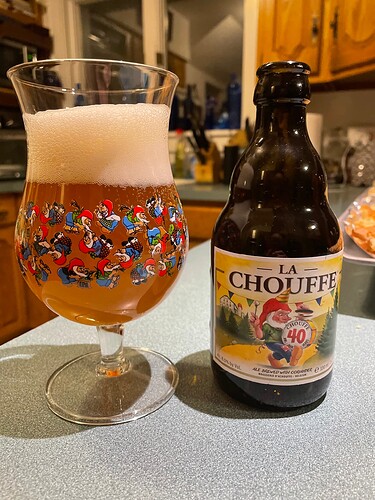 New Glarus is up in WI and Spotted Cow is a huge beer up there, but persoanlly I think it is overrated and find their Moon Man Pale Ale to be far better (and yes, I mixed my beer and glass. I’ll do better next time. 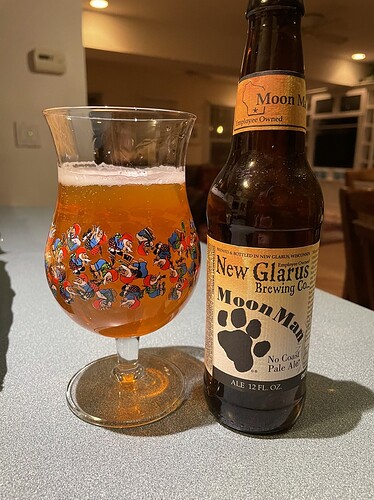 Being an athlete alcohol never passes my lips. One of these: 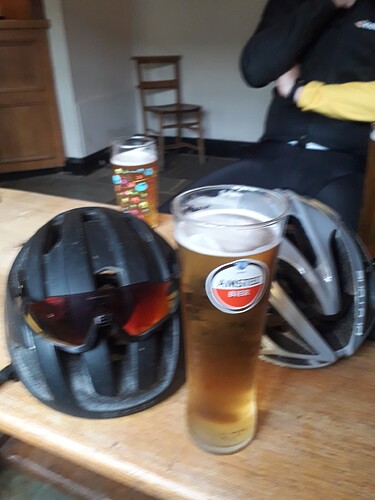 and two of them isn’t alcohol 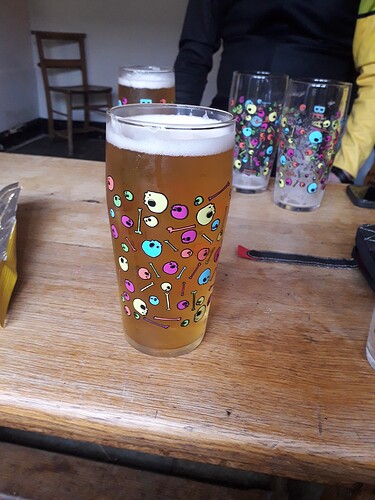 Koenig Pils while doing some bike work. In between a bike ride, autumn rugby internationals, soccer World Cup, and an afternoon hike with my son. A busy Saturday! 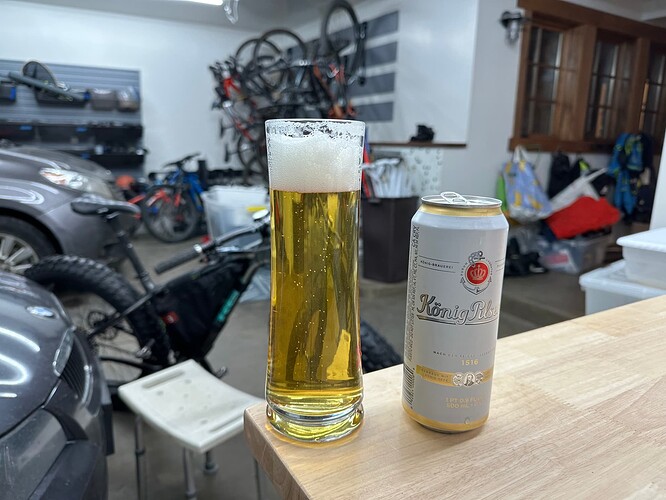 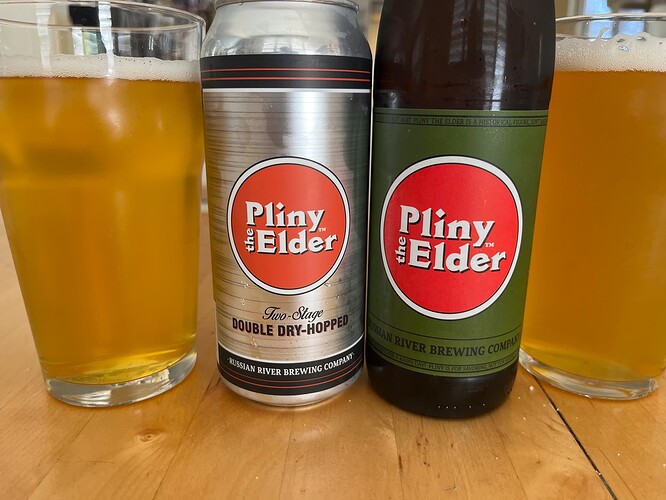 Found this fun mixed 4-pack of beers based on the Rudolph TV special called “Island of Misfit Beers”. Each one is named after one of the characters……this one had a IPA, a Belgian and two milk stouts. The first two were good, but the stouts had a distinct “burnt weed” flavor that wasn’t great. Drank them as flights with my oldest daughter. 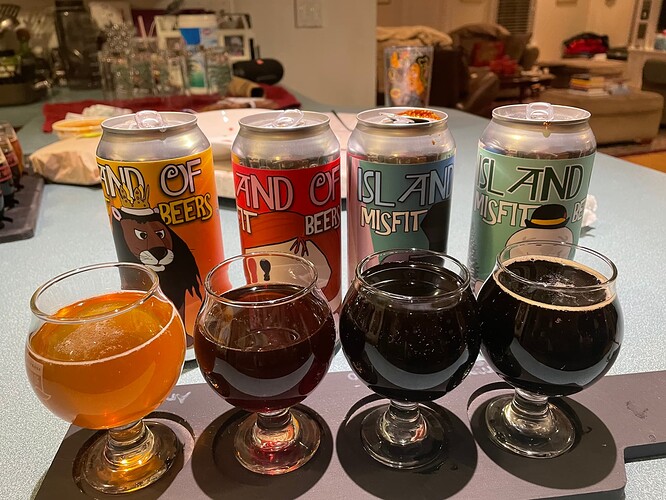 Tonight was back to a classic Winter ale…Samuel Smith’s Winter Welcome. One of my faves. 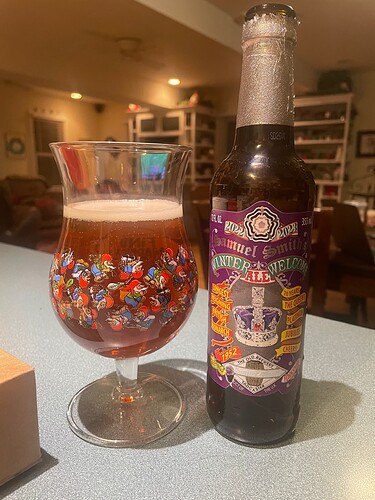 The perfect recovery drink to see me that last 10 miles home. 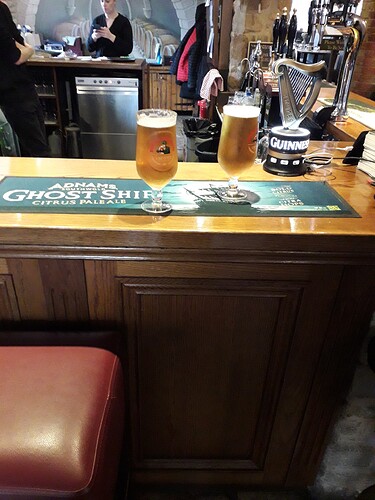 I kinda spoiled its effect by having a second

Time to start watching for the Holiday time seasonal beers. Always try to grab some of the Sierra Nevada and Anchor offerings.

Time to start watching for the Holiday time seasonal beers

Why favorite time of the year for beers…unfortunately the local craft beer store closed in October. They would let break any 4 / 6 pack apart and just buy singles. I could always make a really nice variety pack of winter beers.

I came up with a workaround, though…l.bought 6 different 6-packs and put one of each into a mixed-pack to give 5 of my riding buddies for Xmas, which left me one of the mixed packs for myself.

I avoided most of the usual suspects (Great Lakes Christmas Ale, Revolution Fistmas, etc) but I did include Anchor Steam’s offering.

Stay tuned to this thread for updates. 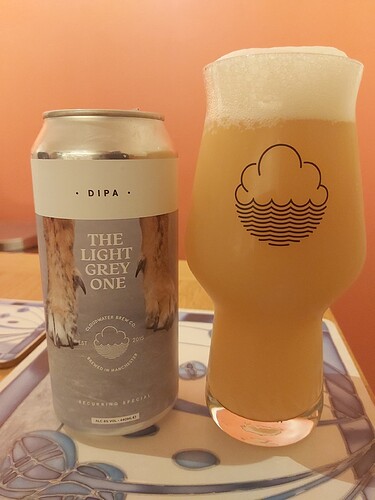 Anchor Steam was one of two craft beers when I moved from MI to the Bay Area back in '86. I think Sierra Nevada had just been introduced around that time, but it took a few years before I remember having it. Anchor Steam seasonal gets my nod.

Went to a memorial service for my next door neighbor, he was 74 and still ripped despite having Leukemia for the last decade. Blair was a truly great man, the type of neighbor and family member everyone wanted. They had some good beer choices after the service, I chose this local one in his honor:

Enjoyable pale ale that paired well with the fruit and veggie plate. I didn’t really taste the Citra/Amarillo candy and fruit notes, it just went down nice and easy.

Am going to say my first good beer was in 1989. Moved to Salt Lake City and Squatters had just opened. Then started mountain biking with a group from work, and one of the guys had gone to brewmaster school and was seriously into the microbrewery scene. The rest is history (which nobody reading this cares to read more about - LOL).

My daughters insisted on posing in the background….the camera focuses on them and not the beer.

Half Acre TEND Winter IPA….nice, classic IPA with just a hint of seasonal spices. Quite tasty. (This was not one of the 6 from my self-made Winter mix pack) 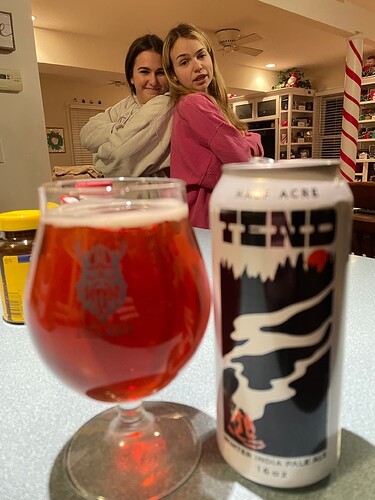 The selfie and photo bombing generation!

Had my first ever “lo-cal” IPA on Thanksgiving. I tried Founders Daytime IPA. I was impressed. Certainly has a lighter body than a real IPA, but good flavor.

Since I am a “more is more” kinda guy, I enjoyed the ability to have 3 drinks and not feel it the next morning, and have fewer calories than 2 regular IPAs would. Will try some other brands soon.

between the beer, food, and music you post, I have a feeling we could hang out…