I know I shoudn’t sweat the numbers/graphs on the Elevate Chrome extension, but I’m just curious.
I’m not in the middle of week 3 of SSB1 and I feel like I’m working quite hard (not too hard though) during all the workouts and they should be benefitting my fitness, right?

However, Elevate shows me I’m losing fitness or keeping it flat at best - with workouts at least every other day, usually about 4/5 workouts per week. How come!? 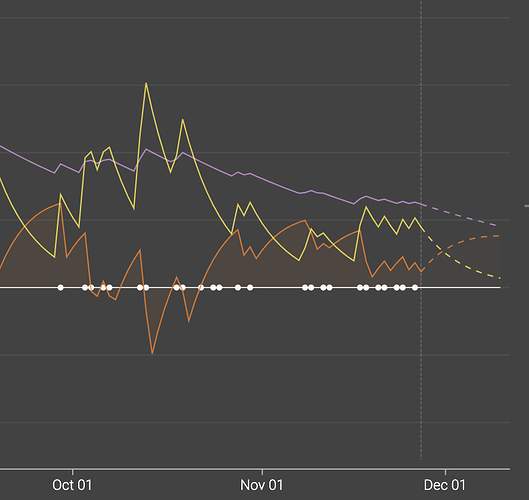 Don’t worry too much about it. The increases in workout difficulty and your ability to finish them should give you an insight to you actually getting stronger.

However, Elevate shows me I’m losing fitness or keeping it flat at best - with workouts at least every other day, usually about 4/5 workouts per week. How come!?

What you are experiencing is the inherent failing of TSS as a fitness tracking figure of merit: it’s a single metric that tries to measure three different physiologic systems. It only works well for athletes whose workouts are predominately stressing only one of those physiologic systems. For instance, if you are a triathlete or ulta athlete spending a solid majority of your time in zone 2 then TSS is going to work a treat. Most of your training stress is on your pre ventilatory threshold 1 so it works to use TSS as a tracking metric.

If you’re using TR sweet spot base, primarily, then TSS is going to work for you. TR SS base uses primarily threshold/ventilatory threshold 2 physiologic zone.

BUT if you have historically done a lot of zone 2 work & now you’re switching to a TR SS base type workout regime TSS is going to confuse you. You were stressing primarily one physiologic system and now you’re stressing primarily another physiologic system…but you’ve got only one TSS. So for the next little while your tracking is going to be a mess.

To understand the shortcoming of TSS, consider two athletes that have the goal of reaching a chronic training load of 100. Athlete #1 elects to get there by going out every day for the next 40 days and doing an hour at threshold. Athlete #2 decides instead to go out every day for the next 40 days and accumulate as much training time in Zone 2 as needed to reach 100 TSS for the day. Which athlete do you think is likely to succeed in achieving a CTL of 100? My money is on athlete 2…but if TSS is TSS is TSS, why should it make a difference?

Noticed that too. I get the big spikes in fitness from my outdoor rides, probably for the reasons Brennus points out. I also think that having a higher outside FTP also skews this (for me, when I was racing I was able to hold higher than my nominal/ indoor FTP for well over an hour).

TSS is one way of measuring how much work you’re doing on the bike. It answers the question, “How much are you riding?” Other, traditional, training load metrics are distance (miles per week) or time (hours per week).

TSS is really just power-adjusted hours. 100 TSS is one hour at a reference power (FTP). Regardless of how you do it, 100 TSS is roughly as much “work” in some sense as some other activity that’s also 100 TSS. (This is by no means actually true, but it’s close enough.) That doesn’t mean that two 100 TSS workouts are the same, just like two “tough but doable” one-hour workouts aren’t the same.

If you really want to know if you should worry about your CTL going down (you probably shouldn’t), you need to look at what activities previously were driving it to be high. If they were things similar in nature to the SSB workouts, then you’re just doing less work now. If they were long, easier outdoor rides, then your CTL going down is natural consequence of switching to structured indoor training, which is harder, takes less time (and TSS) and (hopefully) delivers more physiological adaptation (actual fitness) per TSS.