Too much intensity in TR training plans

Sorry I’m going mid volume for all. There are 3 total phases to traditional base each going for 4 weeks. Sweet spot base has 2 phases at 6 weeks each. These are commonly referenced as TB1 TB2 TB3, or SSB1 and SSB2, with LV MV and HV designating volume. I just didn’t specify the volume in my post

what does LG1 mean?

Aerobic threshold (AeT) . This is a relatively low level of intensity marked by light breathing and the feeling that you could maintain the effort for a few hours. It occurs at about 60% of your aerobic capacity or at about 70% of max heart rate or around 80% of lactate threshold. A ballpark way of determining your aerobic threshold is to subtract 30 beats per minute from your lactate threshold (see below) heart rate. In a sport science lab aerobic threshold is usually defined as the intensity at which lactate just begins to accumulate above the resting level.

Aerobic capacity . This is the same as VO2max – Joe Friel

Thus, without actually having your blood lactate levels tested, the best ballpark assumptions we can make are:

And that is also a bit problematic for me… That dening about lower indoor FTP and not supporting 2 FTPs.
In TP i use Bike and Mtn Bike to set 2 different FTPs and life is much easier

Similar to me. I can push more outside, and I doubt that’s ever going to change too much, or that I really care if it does. Still, I’ve improved my indoor cooling so that should help even those differences. I understand TRs stance on ONE FTP, they’re right - there’s really only one, it’s just easier for most to express their FTP outdoors. I can also push more wattage uphill, again, I doubt that’s going to ever change or that I care if it does. My take is to test indoors if I plan on a block of indoor training, and to test outdoors for the reverse.

Check out this podcast excerpt, it might help form your opinions: 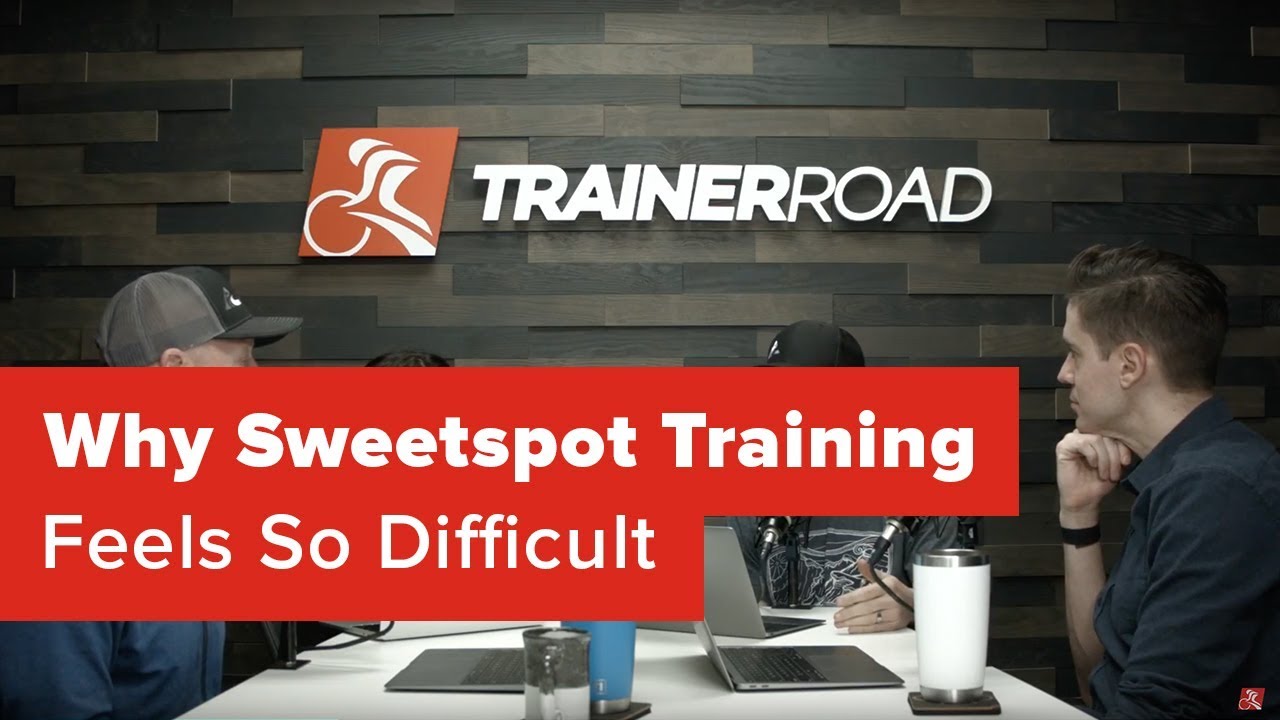 If people are finding SS too hard then that might indicate their FTP is set too high, this would then have them doing something more like threshold which as I’m sure you would agree is a different ball game to SS.

Sweet spot is not easy for me… I did all of them in SSB1 LV, but I failed both of the over unders (had to lower the intensity)…

Over unders are a different ballgame, I literally just finished Tunemah and it was a b’stard. But they’re not sweet spot sessions.

Over unders are threshold to the border of VO2max and are really hard. This is what an all out time trial feels like.

But there are many things that can make them even harder than they are meant to be:

Sleep interrupted four times last night and skipping a meal didn’t help me, I was struggling by the second set of o/u

What I struggle with is why the intensity does not dynamically adjust based on heart rate data. If you are supposed to be in a zone at certain parts of a workload and you are clearly way over it then why doesn’t the application adjust?

Because TR doesn’t use HR for anything. They think the heart is too affected by too many variables to provide quality/usable data.

My HR consistently shows a drift of about 10bpm over the course of a workout. If the intensity was adjusted to allow for that then an interval that should be threshold might become sweet spot or even tempo in intensity thus not giving my body the correct impetus for the desired adaptation.

Also your heart rate is the result of your efforts not the input. You’ll get a different HR doing a minute at 120% FTP after a five minute rest than doing that same minute in the ramp test. Look at a workout like Baxter, some people are Z2/3 when doing that, others are barely out of Z1. Which is right?

If you are supposed to be in a zone

In a power zone, not a heart rate zone.

And: Welcome to the forums!

They think the heart is too affected by too many variables to provide quality/usable data.

at a simplistic level heart rate is affected by many variables, which can make it challenging to review.

Also your heart rate is the result of your efforts not the input. You’ll get a different HR doing a minute at 120% FTP after a five minute rest than doing that same minute in the ramp test.

which means that heart rate data often requires context to understand and interpret.

Agreed but if staying in that power zone leads someone to over training due to extreme heart rate is that not more detrimental than helpful? The technology exists to dynamically adjust the intensity to accommodate.

Heart rate caps for certain intensities like Steven Neal programs are probably a great idea but would be difficult to implement for TR.

TR would need people to do a Max HR test which is probably more difficult than an FTP test. Unlike a coach that can customize this on the fly for the rider, TR would need to figure out a one sized fits all approach. And they would have to support another class of hardware (HR monitors). Honestly, I just don’t see it happening.

Part of the problem is the more is better mentality people have. People think that if they are not suffering then they aren’t getting the adaptations. SS at 85% is probably providing 98% of the adaptions that you get at 95%. Just ride it at 85% instead of killing yourself at 95%.

Heart rate caps during certain training phases is a valuable tool, however I’m a fan of using lactate threshold HR (LTHR) and HR zones based on LTHR. This is all based on what I learned from Coach Friel’s Cyclist Training Bible and blog posts. Its pretty easy to field test and estimate LTHR. My coach supports it as well.

I agree that knowing your HR at threshold is very valuable. For me it’s better than looking at power numbers when riding steady state at threshold. You can quickly tell when you are going into the red.

Since I owned a HR monitor decades before a power meter, I tend to look at HR more than power. With HR and RPE I know exactly where I’m at. Power is an interesting extra data point for me.

I primarily use HR zones for zone2 in early base. For threshold riding I find it better to ride on feel, and ignore HR.

My HR consistently shows a drift of about 10bpm over the course of a workout. If the intensity was adjusted to allow for that then an interval that should be threshold might become sweet spot or even tempo in intensity thus not giving my body the correct impetus for the desired adaptation.

Assume you are not over heating or dehydrating…
What makes you say thats wrong?

Particulary for Z1, Z2 and long steady intervals under Threshold.

That drift is pretty much consistent regardless of ambient temperature. Unless it’s over 20C I’m rarely breaking into much of a sweat so not overheating (does depend on the workout) and I’m hydrating properly.

I’m not sure what you mean by me saying “that’s wrong”.

OK, n=1 and all that. Yesterday I did Lamarck as an outdoor workout, it’s 4x10mins at threshold. Not having a power meter on my MTB (it’s 0C and a bit icy here at the moment) I went by RPE. I chose a local hill that has a Strava Segment so could see my times: the first three of those times were within a 6 second spread out of nine minutes, the last was 20 seconds faster but not sure why. HR values (average/max) were:

Physics dictates that I must be outputting very similar power to move my mass across the same distance and elevation gain (there’s no coasting on this climb) in roughly the same time for all four intervals. Interestingly Strava estimates my power at 256W +/-2W for the first three and 264W for the last (My last indoor FTP test gave a value of 272W) so that’s pretty close to threshold. Actually since TR gives the top of SS for me as 258W I’m bordering on that, if I’d done the later intervals at the same HR as the first then it would have been a SS interval not a threshold. Yes, I’d have got some training benefit but not what was intended. I don’t know exactly how much slower I would need to go to have done that.

This would be even more apparent for something with supra-threshold intervals where the efforts are relatively harder and cause HR to rise even more so restricting power output based on HR would not give you the desired stimulus. Conversely endurance/recovery type rides are less likely to suffer this, assuming adequate hydration and feeding - just checked one of that type of workout, Bald Knob, and my HR was basically 120bpm +/-2 for the entire workout.

Hi Kyle, I don’t agree with you, or more specifically the unstated assumptions and paradigms behind your position.

It is simpler to say, this system and philosophy is based on power not heart rate. I’d encourage you to listen to TRs reasoning in their podcasts.

Not its not, but I think that is more because it is to difficult for TR to do / almost impossible. You need to know each individual and their HR response, fixed precentages don’t really cut it. If you are aren’t t using all the tools at your disposal i.e HR data to monitor and check the intensity you are training the strain your body is under and how you respond to training there is more of a chance of over, under or ineffective training IMO