The Pro Tour over under session is brutal as well.

That looks more like specific race prep, and not like something you’d do during a build-type progression.

It is in their Sweet-spot Base 3 plan. Last week. Which is about switching from Base to race in the last 2 weeks.

Lol, it doesn’t look like anything “sweet spot base”! But if it’s about getting ready for race prep, yeah I can see that.

Or if you just fancy a hard session for fun maybe?

Just wanted to throw this in and see what people think…

I noticed a lot of new ‘progression’ threshold workouts appear with the recent updates, along the lines of this Log In to TrainerRoad 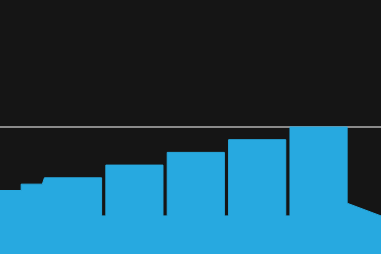 and am intrigued about the benefits, or not, or this progression style versus traditional steady intervals at a single (ish) effort, particularly as they seem to be a staple of the updated 40km TT plans? Might there be a particular benefit (mental or physical) to pre-fatiguing the muscles before the final effort at threshold? Maybe it’s simply a form of variety to mix things up? Intrigued by people’s thoughts…

This seems like a nice base phase workout when you introduce hard intensity gradually.

FR is my major focus for the next 4 week block so will try one or two of these and see how they feel compared to simple long TiZ sessions.

I guess they could also be useful for TT riders doing negative split races where they save the hardest efforts for the final minutes and get used to the mental effort of going hardest right at the end.

Might be a good one to schedule coming out of a recovery week and prior to testing.

Guess I should specify since I generally do threshold tests…

This looks super interesting and I’m looking to give it a go. Where do you usually factor in a rest week if at all?

Depending on when you need it, but I usually deload a little every 4 to 5 weeks. I might still continue threshold build, but reduce other stress (Sweetspot instead of VO2, 2hr base instead of 4).

I have been doing a self coached threshold block and am currently on my penultimate week before a recovery week. My progression was: wk1: 2x20, wk2: 2x25 and wk3: 2x30. I felt pretty good with the 2x25 and have pushed on to 2x30 earlier than expected and i completed them without thrashing my self. The intervals are done at 95% FTP.

Should I continue to push the TIZ to maybe 2x35 or hold at 2x30 and add for spme more watts. Thoughts.

What are your goals and whats happening the rest of the ‘season’ for you? Given its mid Sept, do you have any more races or events this year or are you, like me, about to head into a winter base building programme?

Edit - also wondering what your TTE is at FTP? In other words, has your TiZ in these workouts exceeded your original TTE yet? You may also want to do a test to see if your FTP or TTE have improved yet? If not, maybe keep going with more TiZ and longer/more intervals at the same %

My goal really is to work on my Weaknesses I guess. I’m largely anearobic based power outputs with a low sustained power. I have just had my last race of the season a couple of days ago and I’ll have my end of season break the first 2 weeks of November and then get back into more building as I like to do group rides and not alot of structure in the summer.

I havent done a TTE test as im not sure of a testing method/protocol due. I was planning on testing at the start of week 5 straight after recovery week and going from there. I’ll keep repeating threshold stuff until I stop seeing gains and then do a Vo2 block and go again ideally.

I’ve seen some mention of this in some other threads, but I’m wondering who here as done one of Kolie Moore’s FTP test protocols, and how it worked for them. I’m thinking of giving one a try and wanted to gather other’s experiences and how they constructed a workout based on his descriptions. In particular, what would be a ‘gradual’ increase in power for the baseline and progression 1, which is what I would be experimenting with.

Its a great threshold workout anyway!

Idea being that if you have a TTE of mybe 35 mins (which he reckons a lot of people start around), then doing 2x30m is probably a good session, but if your TTE is already 50-60 mins then 2x30 @95% is not really going to create any overload and you need to go longer or work at 100% etc. From what you said about sustained power being a weakness it might be worth increasing intensity slightly to just under 100% and focussing on pushing the TiZ further beyond your TTE - but test first and then in a few weeks to set a baseline and measure progress.

I’m not a TR subscriber and don’t have access to a workout builder/library to do the KM test. I may have to get the old pen and paper out.

I feel like my TTE is around 45 mins but I don’t know for sure. After setting a baseline I will have a better idea of where I’m at.

I forgot to ask. Is there a specific ramp rate for the final part?

You absolutely don’t need the TR workout to do the test - I even think it’s not the best way to do the it anyway. Just read KM’s article about FTP testing on traininpeaks. There are a couple of variations, but essentially you start at a power slightly below your FTP for a couple of minutes, then ramp it up to where you feel you’re at FTP, and keep pedalling as long as you can. If that seems too long, you can start ramping up slowly to higher power after about 30 mins, until you have to stop.