from The Boss for Lanzarote last night, but I’m not sure if that’s the same as her “It’s okay” or an “Everything’s fine” communication. I will ruminate a little further before booking…but prices look good.

Has anyone hired a bike out there?
@GeorgeAnderson @iajackson @erikkoll ?
A Scott plasma 4 for less than $30/day seems pretty good and would save having a bike box in my garage all year.
http://probikelanzarote.com/biketttri.html

Last time I went for a training week in Lanza I took my bike but the others I went with all hired from there and they were all happy with the bikes and service.

Gotta say, Lanzarote is nice, but Montenegro has better sights and more for the family

Look at France Bike Rentals and see if they are attending that race. They have high end rentals - Emonda SL8, Ventom, Pinarello etc. Pick up and return at the IM village

I rented a bike through https://revolutionlanzarote.com.

When I did my research, I found out that half of the bike renting companies didn’t allow you to rent a bike for a cycling event, or charged you extra for that. This one didn’t have any extra fee and adding that it was quite cheap, I chose them. (Another reason was that at the time, the Canyon ultimate 8.0 was an upgrade against my usual bike).

They delivered all the rented bikes to Club la Santa for free and service was great overall. My only complain is not related to that specific renting company, but to the fact that a rented bike will never fit you as good as your own, and my right knee teached me that lesson with 20km to go into the bike split.

Yeah that the risk always, a dodgy fit could ruin the event. Thanks for the feedback though.

If you choose a roadbike over a triathlon bike, fit could be less of a problem. Depending on the wind conditions, the road bike could be a very solid option for Lanzarote…

Thanks for your reply!

I agree that it is quite normal, when the long run is slower after a longe bike session the day before.
But I am wondering, if in Base/Build it’d be more effective to run faster in a fresher state (like it is more effective to do intervals when you are fresh’n’fueld).
And more important: running 3h in a fatigued state increases the risk of injury probably quite dramatic.

So my question is, if it makes more sense in Base/Build to choose the sequence “Sa: Swim/Run, So: Bike” and when it gets more specific in Specialty “Sa: Bike, So Swim/Run”?

I think this was covered in a podcast a ways back but I can’t quite recall what was said.

Does someone know, which podcast covered this?

I’ve done some searches web and podcast, can’t seem to find it. I think now it was a compromise, most TR subscribers are only able to do long sessions at the weekend.

We could always ask @chad why…

Quickly, are you training for an ultra? How often are you doing a 3hr run?

Your schedule and that of others may dictate this, but ideally, it’s a long ride on Sat and a long run on Sunday. (You may prefer a group ride that goes Sunday instead of Saturday, or other scheduling issues.) Because open water swims, if that’s an option for you, are generally more accessible on the weekend, then I’d put in the open water swim before the run on Sunday. You should not be so fatigued that it’s hurting your run, if you are, then I’d ask if you’re pushing either the run or the swim too hard, suggest more pool time, suggest more running base, and, alternatively, make the Sunday swim a recovery swim sometime after, not immediately after, your run.

I’m doing IM Switzerland, then site seeing afterwards. I didn’t want the risk/headache/cost of shipping (and returning) my bike. So I researched and found France Bike Rental. I settled on a Trek Emonda SL8, DA equipped and paid a small amount extra for Mavic Cosmic Carbons. The setup will be a sub 14 lb bike. There’s a shop here in Austin that rents an Emonda SL 5, so I got a Retul fit on it last week and sent the fit sheet to FBR. I’m going to rent the SL5 periodically to get used to its characteristics. Add all that up and it’s probably more than shipping my bike, but my bike doesn’t weigh 14 lbs : )

Wrapping up half distance mid volume base phase today. First half went very well, re-tested after week 1 and bumped FTP by 30 (first ramp test was my first ever TR ride, so it got a bit messed up). Re-tested after week 4 and bumped ftp by another 30, and think I could have gone even higher. Unfortunately, that night I started getting the flu bug making the rounds through my office, and I spent eight days off of training and pushed the second half of base out by a week. Last four weeks of base I’ve just tried to gradually get going again, only doing 25-75% of the prescribed bike/run training. This final week I’ll have managed nearly all the bike volume and most of the run, but haven’t touched the pool since I got sick five weeks ago. I adjusted my FTP back down 30 for the second half, and some days I couldn’t even hold that due to fatigue from the virus. This past week has felt pretty good, and I’m feeling pretty much recovered from the illness.

My planned HIM is in 9 weeks. As things stand, if I roll forward into the 8-week build I will finish that the weekend before my race and can just taper those final five days beforehand. I’ve contemplated re-doing the second four weeks of base followed by the first four weeks of build, but I don’t really know if it would make much difference. Another option is dialing volume back and going with the low-volume build to keep the training stress down.

Wrapping up half distance mid volume base phase today. First half went very well…Last four weeks of base I’ve just tried to gradually get going again, only doing 25-75% of the prescribed bike/run training.

Well done, finishing Base is worth celebrating - I know I did(!)

You can never compare two people directly as there are so many variables but if you saw my extended illness in Base there are similarities. I found the first week ‘back’ okay, probably as I was so keen, and I haven’t had any trouble in MV FD Build beyond juggling it with the rest of my life.

As you open with a ramp test which will gauge your strength, I think you’ll be okay doing the plan as is. I’d watch intensity and not be afraid to turn it down

cheers on getting through. it’s never great to have a phase of illness, and it can be challenging to get back into the same rhythm. in my opinion the build will do you good as long as you are prepared to absorb the workouts.

if it’s not about the money, why not do the race and still pick another one later in the year?

How much racing do you do in the run up? I am struggling to get in a spring before my A race (Outlaw 70.3) this year, only one I can do is the day before I also have a 10K, thinking about doing them back to back, not worried about the impact because its less than 2 hours of racing but more worried about losing an entire weekend of speciality plan. If it was one or the other I wouldn’t take out the previous day’s training session.

My group ride was cancelled yesterday due to high winds so shock, horror, I had to do the long ride in the trainer; 3:30

I managed to go the distance by taking frequent breaks (a minute or so every 30). I was in the extensions for the vast majority of the saddle time too. Watched a lot of Netflix.

Also the day before I had my coaching assessment and passed! I’ll soon be a Level 1 British Triathlon Federation coach. I probably won’t be doing much on the coaching front until after Outlaw though.

How much racing do you do in the run up?

I’m doing a fair bit now. At least one a month. It’ll be quieter in the run-up to the big race except for the, er, 70.3 I’m doing three weeks before

One thing @chad said recently on the podcast stuck out, which is that the key to training effectively is consistency, which I guess means stick to your schedule if you want the most gains. Me, I like the motivation that events give me and I’m not going to set the world alight on race day either way, so…

I’m planning 3 races this year although I’ve only actually entered one, progressing from an Olympic, Half to a Full distance race. There’s a pool based standard distance race I might enter as well where I raced last year.

I’ll race a good number of TT’s though and maybe a couple of running races although like the triathlons the only one I’ve entered so far is a HM in about 6 weeks time.

Also the day before I had my coaching assessment and passed! I’ll soon be a Level 1 British Triathlon Federation coach.

I stared my journey a year ago in terms of training. I mentally committed to completing an Ironman in January last year, and have since signed up to IM Austria in July. Its been tough as I have had to learn to swim over the past 18 months, I knew how to swim, but not how to swim well. That has probably been my biggest challenge so far.

As far as bike goes, I started out with SS HV once I joined TR, I completed 4 weeks of sustained power before moving to LDT base HV which I am currently doing for another 2 weeks before moving into LDT build + speciality. The LDT plan actually feels easy compared to sweet spot

So, what effort would you run at? 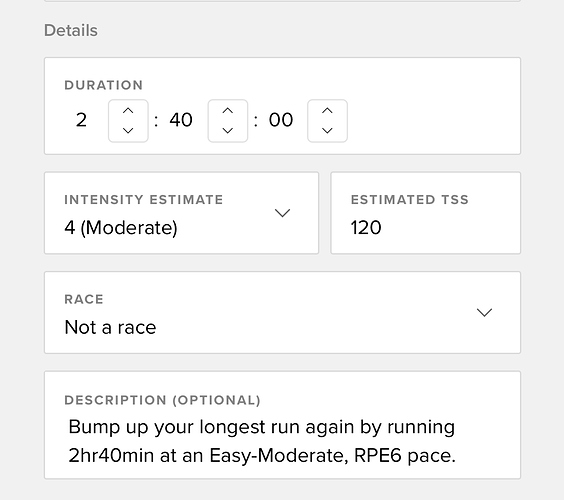