I’ve been scratching my head using my Stages. Power seemed way low. Up until now I only had a Tacx Vortex trainer to use as a power meter. I can accept that the Tacx isn’t the most accurate power meter. Riding side by side with a friend who has a Stages we were calling out power numbers. I was consistently 20-30 watts below him.

I contacted Stages and they suggested a full factory reset which means taking the battery out and then shorting the terminals inside the unit for 20 seconds. I had previously taken the battery out but that wasn’t enough. Before I did this I wanted to do some testings.

This was the Stages versus the Tacx. As you can see, a solid 50 watts off at 325 watts. The interesting thing with this chart is that they drifted farther apart towards the end of the test. At 200 watts the stages was within 10 watts at the beginning and then was 25 watts off at the end.

How did you capture the two power graphs, please?

Second test was Tacx vs Stages vs Powertap hub. Stages vs Tacx is still 44 watts off at 330 watts. This one also seems to show the gap widening between the beginning of the test and the end of the test. At the beginning, it’s 295 watts vs. 285. At the end, Tacx 225 watts vs 197 Stages (28 watt difference).

Also, the Powertap consistently reads higher than the Stages. Now at least, I figure that my Tacx reads way high especially as it’s fully warmed up. But my Stages is still low across the board.

Here is my third test. Before this test I did the factory reset on the Stages power meter. Now the tables have turned on the Powertap hub. The Stages wattage is up and beats the Powertap at almost every wattage.

My Tacx is still way high - especially at higher wattages. At least I have two other power meters now that mostly agree.

I used Golden Cheetah to read the power files and then copied the data into Excel to make charts. It’s a big of a hack and took me some time to figure out and I’m already pretty good with Excel. Dcrainmaker’s tool for $30/year is probably worth it if one was going to do this a lot. Zwift supposedly has some software that will compare two files.

BTW, I bought a new Garmin so now that I have two - I can record each power meter simultaneously. For the Tacx, I recorded the session with their app which then saves the workout to the Tacx cloud.

Dcrainmaker’s tool will do time shifting to align the power better. I just hit the start button on each device simultaneously (as best I could) and it was good enough. One could shift data by some seconds in Excel manually. It wouldn’t be hard.

Zwift supposedly has some software that will compare two files.

Create ZwiftPower account, go to Profile on the Top Menu bar, then Analysis on the 2nd menu bar. 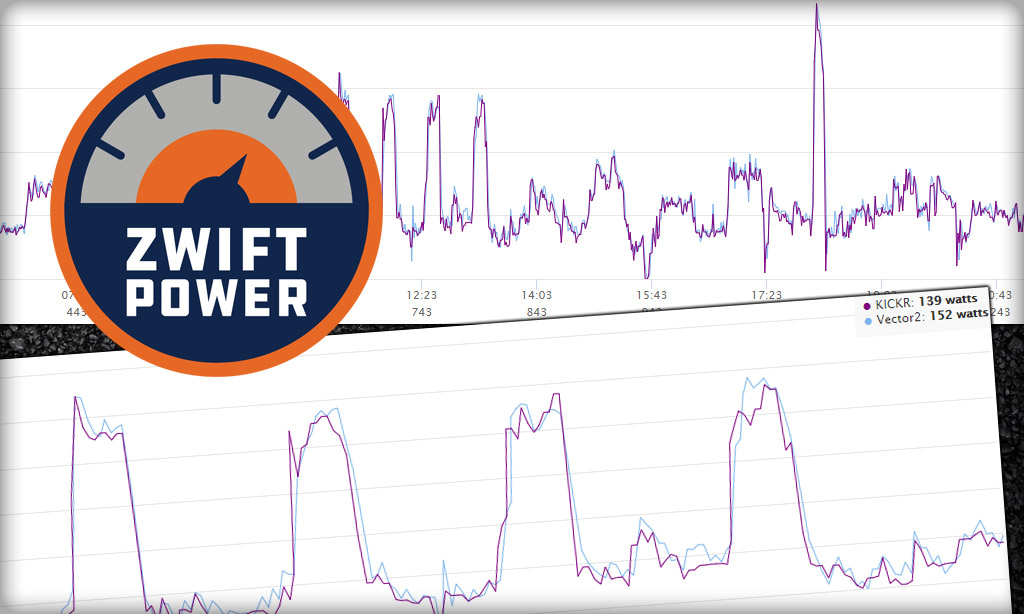 How To Use ZwiftPower’s Dual Recording Power Analysis Tool

Compare two power sources with this free and easy tool.

The only thing I would add, for the guide, is that you don’t actually have to use a Zwift activity. You can load 2 files, with no Zwift activity, you just can’t get a n-way comparison, just 2-way.

Here’s a question for people that know Stages power meters. Why would the factory hard reset make such a difference? It just seems strange that having the battery out would not be enough but shorting the terminals would provide some level of magic.

My Stages is a Campagnolo gen 2. One thing that occurred to me was that I didn’t install mine with a torque wrench. Stages lists specific torque settings for Shimano/Sram. I’m wondering if the torque setting on the crankset would make much of a difference, especially for Campagnolo. I mean, it doesn’t seem like the torque on the hirth joint on an Ultra Torque crankset would make much difference to the Stages power meter but it’s something I could check and then retest.

It just seems strange that having the battery out would not be enough but shorting the terminals would provide some level of magic.

Most likely it has NVRAM, to store things between power cycles.

This may be a “if you have to ask, then don’t do it” type of question:

What did you do to short the terminals?

I’ve been thinking of wrapping electrical tape around the battery compartment to help keep the contact stronger, but maybe I should try this first.

just turn the battery around

I’m not sure turning it around will do it. Here is the way Stages supported suggested I do it (shorting those inner terminals with the edge of the coin battery): 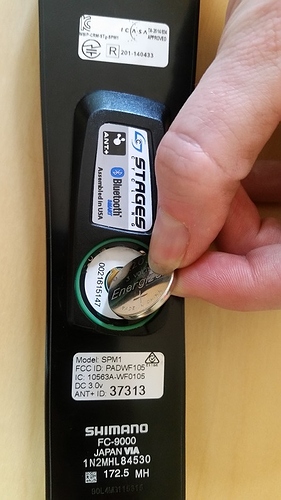 The other issue I have with this stages is constant dropouts. I’m not sure yet if it is my old Garmin 510 or the Stages itself. I have a new 530 which I will try with the Stages out on the road

Did you have to do anything after the reset, or just zero-offset as normal?

Regarding the dropouts - mine mostly gets dropouts when the battery is nearly empty. I found buying good quality batteries makes a difference. I also wrap electrical tape tight around it, mostly because any sort of water ingress drains the battery within days, but it might help keeping it tighter too. I’ve heard of others bulking up the battery with a bit of paper or cardboard for a tighter fit.

I had a couple of dropouts yesterday with my Wahoo Bolt head unit. Also, the battery I just put in a few weeks ago is already showing lower (in the TR app anyway)

You have a Gen 2. I have (had) a Gen 2, and it had a really weak signal. My steel commuter bike, I had to move the head unit closer (more inboard) before the dropouts stopped. I basically turned the out front mount around to move it inboard. I, unfortunately, got rid of the PM before I moved from a Garmin 800 to a 830, so can’t tell if a new head unit would’ve resolved the problem.

Did you have to do anything after the reset, or just zero-offset as normal?

My battery is a brand new energizer. Regarding waterproofing. Mine has never been ridden in bad weather but one thing I was thinking was that the gasket should really get some silicone grease like they put on watch case gaskets. My gasket came dry.

I’m not sure turning it around will do it. Here is the way Stages supported suggested I do it (shorting those inner terminals with the edge of the coin battery):

yes it will, because the entire top of the case is the + terminal. Turning over the battery will short circuit those two contact points inside the power meter (or any device that uses that type of battery).

However it might be difficult to remove a reversed battery, so you avoided that problem.