Just as of know, finished training in iPad (most recent version). Training not uploaded to Strava. When I follow the link “Analyze Ride” at the bottom of the training detail page on the iPad, I am presented with this error below (see screenshot). But, after a couple of minutes, it resolved itself. Is this some server misconfiguration or was there a small outage? 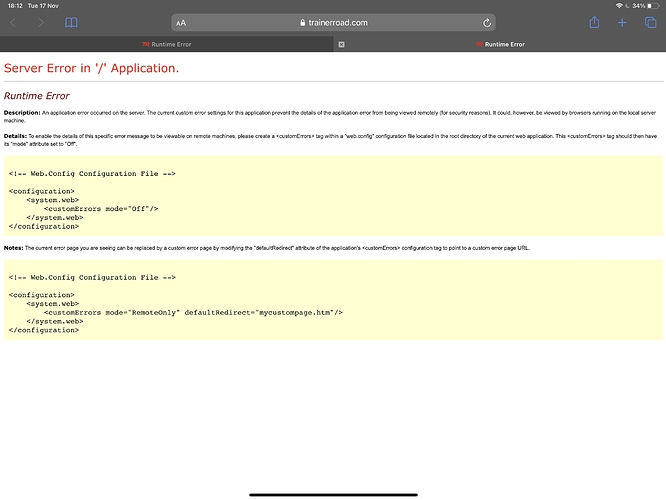 This was approximately around 18:15 GMT (Amsterdam, Netherlands).

In addition, the training did not upload automatically onto Strava (which it had done always previously). I had to click the strava logo button at the bottom of the training detail in the WEB APP manually to resolve this. Not sure if related, but I also have had the experience with my last week’s trainings that the strava upload took noticeably longer than previously (not sure whether that is related to TrainerRoad or to Strava itself).

Same with me on Android. It eventually showed up on the web version and i manually sync’d it with Strava. Similar time if a bit later to above

Oh no! Sorry to hear this, looking into it now.

Okay UPDATE: we’re keeping track of the users that experience this issue as a bug report, can you check in with support at support@trainerroad.com so we can take a deeper look and isolate what’s causing it in the future?
Apologies for the trouble, thanks in advance for reaching out!

@IvyAudrain I will also mail this, but for full transparency, here goes:

Just did a ride on iPad OS (newest version). After ride, it did not show up on TrainerRoad web app (webbrowser). Pulling the training down on the Ride Summary page indicated “Ride Synced”, yet following the “Analyze Ride” button online, it said “ouch… touched a nasty spill”.

There may be one factor possible be attributed to iPad OS. With every major iPad OS update, they tend to be aggressive in background processes and they tend to kill or suspend processes in the background (this was also an issue with some apps that used iOS UI features, such as Spotify using the music control UI).

So, after my training, I waited 1 minute (got off bike, took a sip of juice, took my shoes off). THEN closed my iPad. Perhaps TrainerRoad was still syncing on the iPad, but since I closed tie iPad, perhaps the process was suspended.

However, there may be one code issue and one solution. First, the app DID indicate the ride was synced (when I pulled down on iPad OS). Second, a solution may be to provide an indicator that the ride is still syncing to notify users that they perhaps shouldn’t lock their iPad already.

As of now , (10-15mins later), the ride IS synced on the web app. So it seems to be there somewhere along the syncing process there is an issue, and possibly in the UI feedback.

Thanks for sending that in to support AND posting here to share with other athletes as well. Cheers!

Reload the web page.
Clear your browser’s cache.
Delete your browser’s cookies.
Troubleshoot as a 504 Gateway Timeout error instead.
Contacting the website is another option.
Come back later.

This may help you,
Rachel Gomez