See what made your Progression Level change!

Looks like it’s a display bug on our side. Your FTP change is what changed your progression level. They have it reported and they will get it fixed.

Thanks for the fast service

We’ve updated the text and merged it. It will go out soon to production. 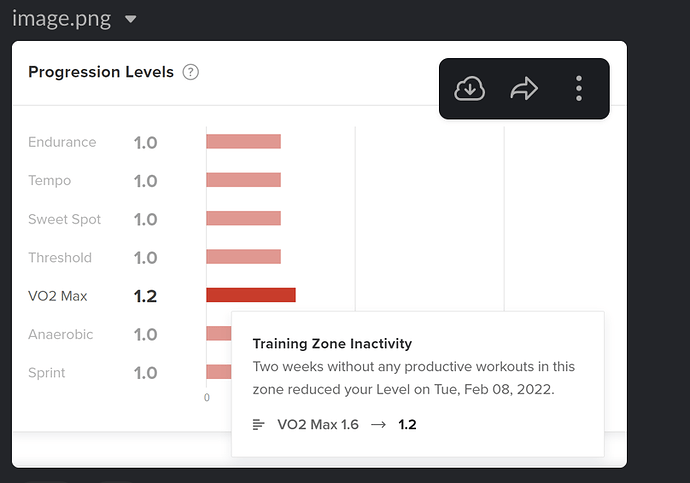 Nice upgrade. Now if there was only a way to get that automatically added to your calendar as an annotation

Bit of a crossover with the new FTP estimation feature here, but if you accept an FTP estimate the reason for change is showing as “Manual FTP Update”.

I think the word “Manual” is a bit misleading here, but it’s a minor/picky thing.

PL History chart… is that a thing? For us? Available now?

There’s no PL history chart. I think it wouldn’t look very good or be informative (we’ve tried it).

Maybe we do a list though that shows what impacted your changes. But for right now we’ve got some bigger priorities (like getting AI FTP Detection out of early access).

You could have the past two or three changes as slightly lighter shades behind it. (Or darker for when you’re increasing).

I don’t think it’s a particularly informative thing myself, but just an idea for how it might work.

Something changed and most of my PLs now say: 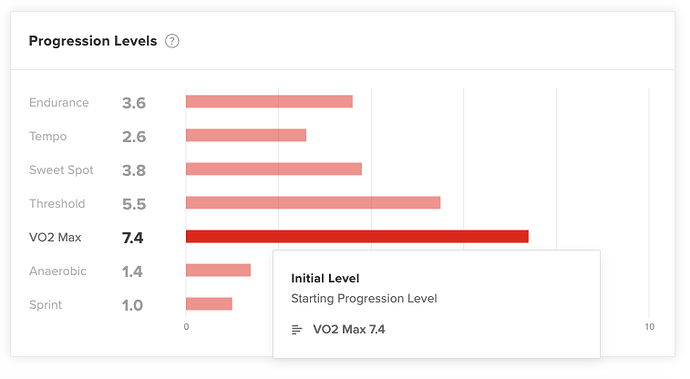 But that can’t be right – I am at VO2 Max 7.4 because on Tuesday I completed Rattlesnake, and a week prior to that Bashful +1.

Tempo has a similar note, citing secondary progression because of a workout I did on 2/6.

So what changed? This feature was working for me yesterday. But I also tried out the new FTP estimation yesterday, although I did not accept the suggestion.

Did that somehow reset my progression levels?

That looks like a bug. I just reported it. Sorry about that.

put that in the Memes section

Ha, I could, but I try not to double-dip

After the next 2 weeks will it say sth like

So it keeps my last self archived level visible in the tooltip. Would be better in my opinion.

It says: “Your Progression Level in each zone changes based on your performance” What does the performance mean in this case? I am using erg mode and locked into the power that workouts suggest. I can do neither better nor worse than the workouts say. Is it basically the sum of my workouts?

@SeanHurley Do you know the answer to this?

Currently, the displayed text won’t adjust to show the specific time period it’s been since you trained a particular zone. It will continue to say “Two weeks” since that’s the window of time that affects a Progression Level decrease, but it could be cool to add more specificity to the text in the future!

Reviving this thread because I see the same behavior. All my upgraded progression levels show “starting progression level” and not the date that I was moved to that level or the “+” that came with it. I DO see where it demotes me due to inactivity in that level, but none of the promotions. Caveat, I have not been following a TR plan and have been building my own workouts in Zwift, ported to TR through Strava. Is this normal behavior? Is this how other people see it? I can open a ticket if needed.

Adding an update: Since no one replied, I opened a ticket and this is a known bug. The display is off, but it does not impact the actual PL or AT. I’m surprised none of you are having the same problem.