I recently got into cycling and purchased a used 2020 Jamis Renegade C2. Love it so far, but when I went to adjust my saddle height I was unable to re-tighten the seat clamp/wedge mechanism. Now, for nearly two weeks I have been unable to ride because of this. Any ideas where I can find a replacement part? My LBS is a Jamis dealer and has contacted them, but has not gotten a response a week on. I can’t find specific references to this part in the bike manual and can’t really find the part online either.

Attached are a couple photos of the part. For a longer story, here’s what happened: This problem started when I went to adjust my seat height, something I hadn’t done since having the bike set up. I unscrewed the bolt in the seat post securement mechanism completely and it fell to the ground, which I didn’t know I shouldn’t do. After adjusting the seat post and putting the bolt back in, it would not tighten and confusingly wouldn’t loosen either. A mechanic at my shop got the bolt out somehow, I think by pressing on the whole wedge from inside the seat tube. He recommended I not try to use it again. During either time messing with it, nothing fell out onto the ground (beside the bolt itself) or was dropped inside the bike frame.

Thanks for your time! 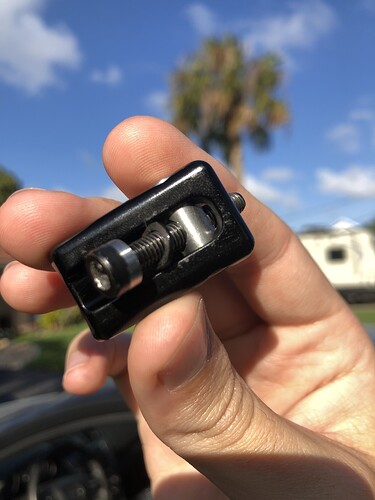 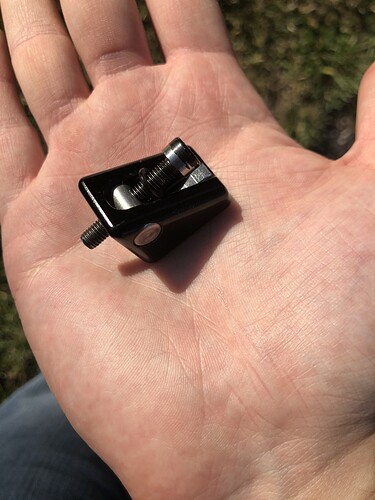 I’m not familiar with that part, but on your pictures it looks fine? What is wrong with it? Is it just the bolt that is not moving? Maybe it is cross-threaded, can you take it out and put back in, it should turn easily. Also have a look at the threads, that there is no damage to them (both the bolt and the nut). If the bolt is damaged, measure it and replace it, if the threads in the but are damaged, they can probably be re-tapped with the right tools. Your bike shop should be able to help, if they can’t, look for another shop!

The mechanic at the shop said the bolt should be doing something to move the wedge horizontally to put pressure on the seat post. Tightening or loosening the bolt doesn’t seem to do anything as far as creating motion with the wedge, and he advised me against trying to use it again in case I overtighten it and crack my carbon frame. The wedge sits inside the seat tube and is tightened from a hole sitting between the seat tube and top tube. The mechanic was an older guy and seemed pretty experienced.

I got a second opinion from another shop and they more or less echoed the same thing, except they said it appears there’s a part missing from under the bolt (hence the stripped paint at the bottom of the bolt head).

I’ll look at the bolt more and try your suggestions. Thanks for the reply!

Think the mechanic might be right, and there is a part missing. Maybe something fell off when you dropped it? Or maybe it fell inside the frame?

I’ll double-check the ground where I took the bolt out, but now it’s been two weeks. The seat post was fine before I messed with it, maybe I did lose a part.

Think what is missing is the part that actually presses against the seatpost. If you look at other seatpost clamp wedges, you see what I mean. It shouldn’t be that small, so you might find it somewhere.

This clamp is the one that came with the bike, as far as I can tell. I don’t see why the original owner would make a change like that after only having the bike a few months. Plus, it fits perfectly in a carve out inside the front of the seat tube.

I looked on Google Images for other seat post wedge clamps and their design generally looks different than mine. I’m not sure exactly what differences or parts you mean, sorry. However in the one photo I uploaded that has the clamp resting in my palm, the surface facing my palm is the part of it that goes against the seat post. Here’s a better photo of the side that should be being pushed out against the seat post to secure it. 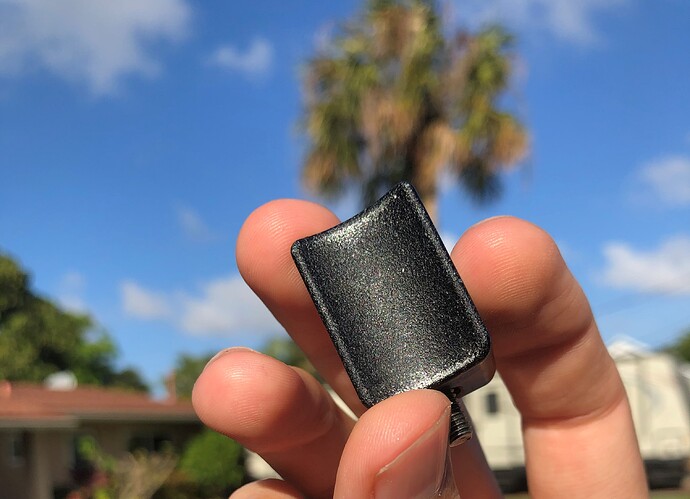 I think usually there are two parts to those clamps, tightening the bolt makes one part move along the other part. But maybe one of them is build into your frame for that bike.
Sorry, don’t think I can help with this one.

The comment about seat post clamps in was a general comment, not directed at you! All of them are awful, lol. I’m not sure why the bike industry thought it was a good idea to have these wedges.

It would make sense that there would be another part, but I’m not sure if that’s the case with this mechanism. Perhaps this design is more novel or unique. Either way, I’ve reached out to Jamis myself in addition to my LBS doing so as well. Hopefully I’ll hear back from them soon.

Anyway, thanks for all your time and effort! I really appreciated it.

Hey, I know this is a long shot, but did you figure out what part you were missing?

My road bike seems to have the exact same seatpost clamping system, and I too appear to be missing a piece. I’ve got nearly exactly what you have pictured, but can’t figure out what piece is missing.

I dont know if you have resolved this but the other p-art is the frame of the bike. the hypotenuse of the triangle rides on a ramp.
The ramp is molded in the frame. The screw pulls the wedge down the ramp which because it is at about 45 deg puts pressure on the seat tube, and conceptually holds it in place.
Its clever but…it has issues. In my case its in a gravel bike, which implies dust…its a pain to put back in so you don’t take it out to clean it and the grains of gravel dust act like a lubricant or little rollers, that allow it to move. The shiny part of the head and doesn’t imply another part it just fits the countersink hole easier.
Its a total pain to reinsert. My bolt was stripped so I bought a replace 5mm x 30mm 80 pitch screw at Ace hardware, chucked it up in a Jacobs chuck and removed 0.002 mm to make it a copy, I thought worth rue little effort to remove the fluting on the screw had so it didn’t file of the carbon when turning.

I’ve had similar issues with my Jamis Renegade Expert (2018). The seat post kept slipping down, despite cleaning it and the clamp up, and adding fresh carbon assembly paste. The bolt head got chewed up because it’s in such an awkward place to reach to tighten it. The bike is excellent in all other aspects, but I wish they’d thought this part through a bit better! I guess it’s to give a clean look (it does look good) but functionally it’s a right pain.

There are two bike saddle clamp types available in the market that you can choose when installing a bike seat clamp: a quick-release seat clamp or an Allen bicycle seat post clamp. While the former requires a lever to tighten bike seat clamp, the latter needs an Allen key.