For me, the ramp test has consistently over stated my FTP.

I’ve discovered this when the resetting FTP and then failing or struggling badly on sessions where I know from past experience it didn’t ought to be ‘that’ bad.

I suspect the reason is primarily due to my short power being (relatively) less-weak than my endurance.

This is just for me and I think the main ‘take home’ point I’ve been able to gain from this thread (and others on this forum) is the accuracy of these tests versus another is heavily dependent on the individual’s fitness and ‘make up’ so a certain initial period of trial and error is inevitably necessary to see what ‘fits’ best for each individual.

None of these protocols will give the ‘right’ answer. The wattage number you get out is a guide for setting zones, so even if you used a different protocol every time you tested it wouldn’t really matter if you complete the test to the best of your abilities - same as it doesn’t matter if you are doing a sweetspot interval at 90% or 87% or 94%, it’s just a number in a zone and the training adaption is not going to be big enough for you to notice, compared to workout compliance and relevance to your goals.

Just do the protocol you like the best and can repeat without mental hangups or pacing issues. If you are training consistently then your FTP is going to move pretty quickly anyway, so stressing about it being X or Y is pointless.

Agreed. I think the entire discussion around whether FTP tests are accurate is a bit of a red herring. All that matters is whether it gives you a suitable training benchmark.

Unless you’re close to your physiological limits and extremely highly trained it’s a constantly moving target. Short of lab testing your training will tell you. I’ve been pretty successful through my latest 4.5 weeks of ssbmvII. My “true” ftp is about 11-12 watts, or 3% below my training ftp. On workouts like Mary Austin or Mcadie I can really feel the burn dissipating just below that point, and it’s where my heart rate might go down even at the end late in those sessions. Less so when just above it. That doesn’t mean my training ftp hasn’t been appropriate.

ok, that test switches to resistance mode if you have a smart trainer and normally use Erg. Which trainer do you have?

#2 no the right cassette. There is a huge gaps in the gears. I was going from 240w at 90 rpm to 290 at 85 rpm.really pushing (read non sustainable). So I kept the slightly lower gear and up the cadence to 95 but even then was not enough to reflect a real change in ftp.

IIRC, he has a STAC Halcyon, which is a trainer that could act a bit different from other trainers. It should generally handle the mode switches, but the actual feel and function may lead to differences.

ok, that test switches to resistance mode if you have a smart trainer and normally use Erg. Which trainer do you have?

I do have a STAC Halcyon.

TR did change to resistance mode 2x… First on the 5 minute wu at 105 ftp, then on the 20 minutes.
The first time caught me by surprise and it was like hitting a wall!

I have a 52/36 in front, but i cant use the 36. The cable guide to the front derailleur is broken and i can’t shift.
My bike is 10 speeds but I dont remember what i have on the back I will find out when i get home.
All i know is that there is a gap where the power would raise and the cadence would drop (significantly both).

Maybe the resistance was not set correctly, but IDK.
The gear i was using yesterday, usually works well for z3 rides.
I think, if i have had access to shift the front, i would probably have found a proper gear…
but here we are!

You can use the Resistance percentage value, to change the effective resistance you have. If the 35% (IIRC) felt too tough, just notch it down 5% and evaluate. You should be able to find a percentage that will work with your big ring and cassette, within reason.

I saw i can change the resistance on the mac app,
But it didnt give me the option on the android app.

Sadly, the mobile app has the setting buried in the Devices section. You can change it there, ahead of the workout / test, if you switch to Resistance for a moment, adjust the percentage, and return to ERG. 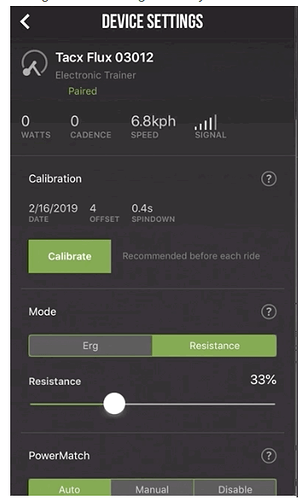 I think pacing longer hard efforts is a valuable skill, particularly if you compete as a triathlete. Worth developing IMHO. My best ramp test was done in an 80+ degree garage with a Vornado fan, not the best fan but I had done weeks of training in August garage heat plus some outside rides in 100F heat. Its not as humid here, but we do get marine layers most nights as the San Francisco Bay fog bank pushes inland. My most recent 20-min test was 3 weeks ago, outside in 80+F temps but into a 10+mph headwind. It helps I’ve been doing heat training outside in the afternoon.

I think pacing longer hard efforts is a valuable skill, particularly if you compete as a triathlete. Worth developing IMHO.

My next test is in 6 weeks.
I decided to keep the FTP as it was before the test.
I will consider the 20 minute test again, but i really need to test the resistance percent.
Not finding the right gear was the worse part
I knew i was going to failed from the start (going at lower power than needed and higher cadence)

I will consider the 20 minute test again, but i really need to test the resistance percent.

Happened to me when I joined TrainerRoad! 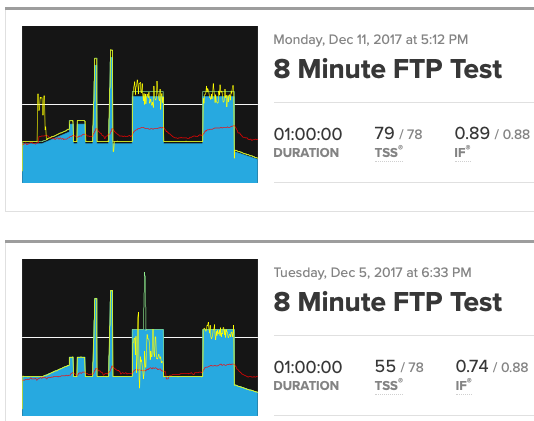 Check out that awesome first 8-min test interval on December 5… Used that first interval to play around with resistance and then the second interval was ok.

Thats a huge difference. I will definitely play with this later!
Maybe even tomorrow since is an easy ride…i could play around with something else to test resistance…

Something short and around Threshold could be a good test, and give you time to toggle between Resistance settings to test.

Turns out I have pioneer tomorrow. I thought i had petite.

could ainslie-5 replacement petite (recovery wise) for my friday ride?
I have a Log In to TrainerRoad on Saturday and dont want to over cook my legs.

No, I don’t see those as a good swap/match. I’d skip the testing now and just focus on the easy stuff and be ready for Mcadie. It’s a tough one in normal cases, so I would not be testing ahead of it. Maybe look for a different time to test.

) and still some good effort to complete well.