PSA: DON"T Upgrade to the latest Beta - Breaks BLE on Mac (at least M1 based) [Resolved ✅ ]

PSA: I upgraded to the latest TR Mac Beta this morning, and it completely breaks BLE - see the below screenshot. I verified this on 2 M1 based Macs, and reported it to TR Support. 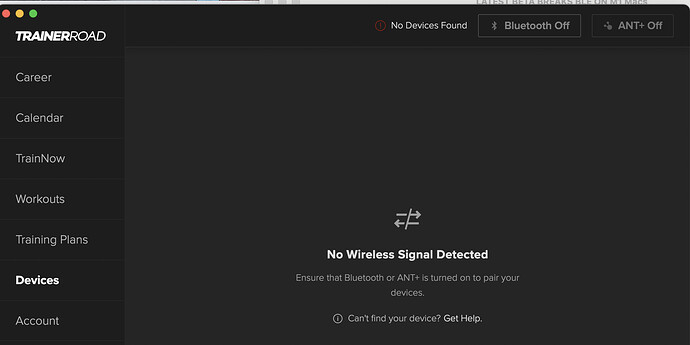 Same here on an Intel based Mac mini.

I get that screen on a Intel based windows 11 machine, but is always sorted after a re-boot.

Thanks for reporting this, @alphadogcycling. The engineers are looking into this just now to get a fix out ASAP. Thanks for your patience, guys!

TR just released a hot fix / updated version of the Mac beta app that fixes the BLE issue - at least it fixed it for me.

I had to leave the beta. Remove the app and install the current alpha? Version.

Hoping for an android fix too.

You should report the Android problem to TR support. I only reported the Mac issues, and it worked on the iOS for me this morning (but I didn’t check for an iOS update prior to my ride)

@AlphaDogCycling thanks for giving everyone the heads up!

Just to confirm, there’s a new beta release that fixes the BLE issue out now. To get the update, relaunch TR and you’ll see the banner at the top.

The new version is 2022.38.1.217 — you can confirm you’re on the updated version by checking the Support tab > scroll down > see version number (see image below).

@RolandGosebruch, let us know if you’re still running into issues after updating and we’ll get eyes on it ASAP.

Wow, that was fast!

Current version looks good. ANT+ and Bluetooth are on, all devices are detected.