During my recent bike fit I felt the fitter had trouble getting an accurate sit bone measurement. In the end he landed on 117mm and switched me to a wider saddle, a Specialized Bridge 155.

It made me sore, but i wasn’t sure if it was because it was new, too wide and/or my sit bone measurement was off.

I went back in a pair of gym shorts (thinking that the chamois I was wearing in the initial fit was what was throwing off the measurement) and had him remeasure me. The measurement came back a little thinner/shorter but he said not enough to go down from a 155 to a 148 or smaller. I had him put my stock saddle back on and sure enough he was right. Despite the new pain, I could feel how much better my rear end liked the 155 saddle.

From there we rifled through a whole bunch of other specialized saddles and I landed on the Specialized Power Comp 155. I could tell my sit bones were in the right spot in the meat of the saddle.

Since then, I’ve been riding a lot and I’m still getting significant sit bone pain. It occurred to me that perhaps my chamois isn’t positioned correctly?

I have tried some Castelli chamois in the past, but they felt weird. Maybe it’s my unorthodox anatomy, but the chamois always felt way too forward. To the point where I could grab a good bunch of the chamois jutting out between my thighs in my fist while i was riding.

I then tried on a few sugoi Bibs and they fit me like a glove! As soon as I put them on, I could feel how the chamois “went all the way back” and there wasn’t all this extra material sticking out in front when I was on the saddle. I bought a few pairs of sugoi Bibs and was happy. That was until I started riding so much more this summer.

So after the bike fit, and after finding the correct saddle and still having this crazy sit bone pain, I very intentionally reached down and felt the spot that was aggravating me while at a stop. It occurred to me that the inner part of my sit bone was almost exactly halfway on the outer edge of my chamois while the outer half of my sit bone was on the seam. Fyi, these are the sugoi rse bib shorts from a few years ago with the Formula FXE chamois. 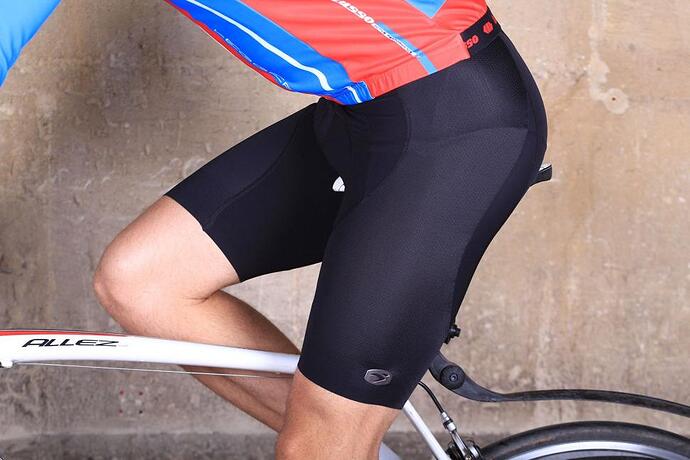 Very good pad, but poor finish lets them down – at this price they need a little refinement

For my next ride I tried “not to pull up the chamois so far and tightly” to allow the chamois to sit farther forward so my sit bones were farther back (and chamois farther forward) and allow my sit bones to be on the widest part of the chamois. Because while the Castelli chamois were waaaaay too forward, maybe the sugoi chamois was an inch or so too far back. I also made sure to rub chamois cream into that outer part of the chamois and seam since that seemed to be the specific problem area. I also popped 4 advil before the ride lol.

With the chamois repositioned, advil taken and some more precise cream application, it seemed to work. It wasn’t nearly as bad, but on the latter half of the ride I kept reaching down and pulling the leg of my short down towards my knee; to pull the chamois forward and get that widest part of the chamois back under the middle of my sit bones. I completed the 115 mile 7000’ foot ride in a lot less pain than I anticipated, but noticed I now had the beginnings of chaffing; something I’ve never had before.

Suffice to say, I’m at a bit of a loss. I ordered some other Bib brands but they all feel similar in placement at best and none seemed to fit as nice as my sugois (although some chamois did seem thicker). And i can’t ride the new Bibs with cream for 75+ miles to test them out and then still be able to return them.

Is this a common problem? I’m not your typical cyclist body type. Former college hockey player, minor league baseball player and now pro skier. I have a weird body. I’m very muscled up top, kinda short at 5’9", 200 lbs with a huge butt and quads, but the tiniest little calves and ankles you’ve ever seen lol. I’m usually an XL or L in Bibs and jerseys, depends on the brand. I’m a little heavy right how after some injuries so losing 5-10 pounds is in the future. sigh

Any advice or experiences are appreciated! Thanks!

This one is a tough one. In terms of chamois, there is no one-size fits all. People react differently to foam thickness and density. Low hanging fruit is make sure they aren’t worn and that they have the right coverage. You may want to err on the side of “sizing up” if you’re sit bones are wider than average, you don’t want to be “rocking” on the edge. Women’s chamois are built for wider set hips and I personally can wear men’s chamois fine as my hips are narrower than average for women. I’m not suggesting you wear women’s chamois, not that anyone should care, but maybe sizing down will actually suit your sitbones better. I say this because your chamois might be too long for your height and distance from your pelvis to your sit bones and is wasted up your backside. The reverse could also be true, the chamois might be too small and you might want to size up. It sounds like if you’re pulling the leg down to bring the width forward, it might be the former.

Second thing, without knowing the specifics of the pain, it might just be sitbone callousing. Because you have fundamentally changed how you place your weight on the saddle (you may have even been rocked forward on your pelvis more on the old fit), the soft tissue in that area has not been hardened and it could just be a matter of a few weeks of “dealing with it” until you are calloused up. Many of us can remember that when we first started riding or got back on the bike after a protracted absence. That said, it usually reduces to a tolerable level after a few minutes on the bike. The telltale sign of this is a feeling of tenderness or almost bruising around your sitbones. They can really hurt to the touch.

Laslty, and this is probably going to come across like a shot across the bow to your fitter, but they might have just missed the mark here. Fitters get things wrong, and while I am not saying this is the case, some are motivated to sell you something to substantiate the fit and generate revenue for their shop. You didn’t mention any feedback on your old saddle, just that they replaced it. If the old saddle was cutting it, why change? I might just be missing the context here.

It seems more like options one or two, or even a mix of both. Many of the apparel companies out there put together some nice models of their chamois. I would take a look at the shape and constitution of those to see if one of them makes sense to what your anecdotal experience tells you. People will probably have chamois that they swear by, but that might not be of any help to you. I would go with the highest quality bibs that fit your budget. Definitely not the article to skimp on

I think you might be able to play with sizes or chamois pad style on the Sugoi or Castelli and get a good pair. Good luck

A couple of things to think about. First, 155 seems way too wide a saddle for your measurement. What will happen is that the seat will cause you to spread across it too far. You will feel that your sit bones are supported but your nether regions will never feel comfortable as you are actually pulling yourself across the saddle. I had this happen and could not figure it out. Was riding a Power Arc which I really liked - a 155. Had pain I could not get a handle on. Ended up at a different bike shop and took another measurement. Also rode a buddy’s Pinarello set up with a much thinner saddle. The combination of these two experiences caused me to try a thinner Romin carbon saddle. Wow, so comfortable. 12 mm can make a universe of difference.

Second, I’ve tried a number of bibs and ride with a group who tries new things. The bibs that we like the most, and cannot find any others that compare to them, are Assos. They just plain work. As has been mentioned, this is one place where I don’t scrimp. Good chamois cream helps as well - I like Assos the best there as well. As always YMMV, and I don’t pretend to know that these suggestions will work for all. Hope that these ideas may be of help.

A couple other things to throw in the mixer…

It always amazes me how the right saddle if only 5mm off can affect comfort. I train in absurdly expensive but, awesome Assos bibs and this was me while trying to get my new whip set up. Not saying this is you but, as @Sarah mentioned fitters can be wrong. Or they get you close but, riding during a fit session is always nothing like an actual ride (IMO/E). It can take a couple tweaks to get the position perfect. It’s not against the rules to move stuff after a fit is all I’m suggesting.

Also, after a big week, if I go out and just spin with very light pressure on the pedals I can get very sore very quick. Feels similar to a bruise. The moment I lean forward a touch and apply more pressure to the pedals (takes a touch of pressure off the saddle) it feels like sitting on marshmallows made by Elves graced by Angels. Ok not really but, it’s a ton better.

Did some sprint intervals during a quick 20 miler on the 143 today.

I felt different (somewhat unpleasant) pressure in almost the identical spot, but I suspect that will be the case when switching saddles, even when it’s the same model and you’ve only changed the width from 155 to 143.

The pressure point DID seem to be more in the ‘meat’ of the chamois though, so I think this may have been the fix I was looking for.

Aka: chamois fit was fine, saddle model and shape was fine, but the saddle was jussst a bit too wide.

Will report back again after a few hundred miles when I can give a proper assessment. Thanks again y’all!