No longer able to afford TR

I don’t think the £ has ever been this week against the $, I think that is part of the problem for people in this thread, but I think TR expanding price due to the $/GBP can’t be absorbed by many, as the real problem is that everything else has increased in price in the UK, food (brexit), grain across europe is lacking (war) and fuel price have gone through the roof, my home fuel bill has gone £65 a month, to £180, and that not going to be the end of it, my food bill has gone from about 60 to 95 a week, that a £255 pay cut (after tax) every month, if you were close to the edge before, which a lot of middle class in the UK, your over well past it now, so when looking down your expenses and arguing about what should go, £20+ for TR (1:1 and conversion fee’s) is going to take some explaining

Sorry for your lost, that’s a few years worth of TR.

Yeah, exchange rate changes on top of record inflation (seemingly hitting the entire world at this point) is a double whammy for those not using USD as their native currency.

Just had a recheck of one chart I mentioned. There is one key point where the GBP & USD nearly matched, but the GBP has been ahead by varying amounts for ages: 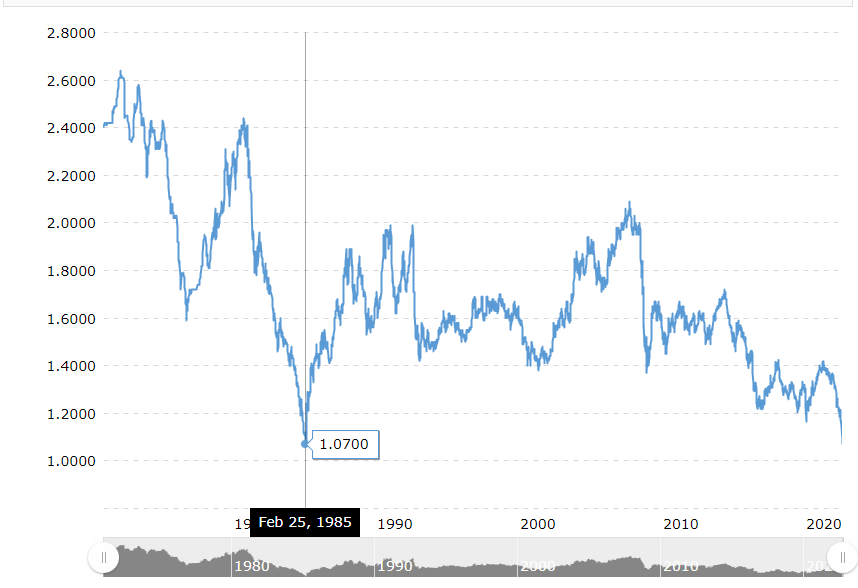 Im scared to say the reason the uk pound has just plummeted beyond where it should be as its a political reason.

Dont worry, it will bounce bank the 1st Thursday of next month when the Bank of England raise interest rates by 1%+ to offset the ridulous mini budget.

TR was already the most expensive option out there, the exchange rate just made it worse.

The exchange rate difference should be temporary, so if you can see it through and TR was/is of value then it will be again.

The recent drop of the pound can really only made TR a few pence more expensive, the pound was weak for quite a while now. But those few pence are probably the proverbial straw that broke the camel’s back.

Dont worry, it will bounce bank the 1st Thursday of next month when the Bank of England raise interest rates by 1%+ to offset the ridulous mini budget.

The recent drop of the pound can really only made TR a few pence more expensive, the pound was weak for quite a while now. But those few pence are probably the proverbial straw that broke the camel’s back.

As I found when I looked back we were at nearly 1.4 just last year. It only really started coming down since about February. 1.35 to 1.05 in 9 months is pretty precipitous!!! 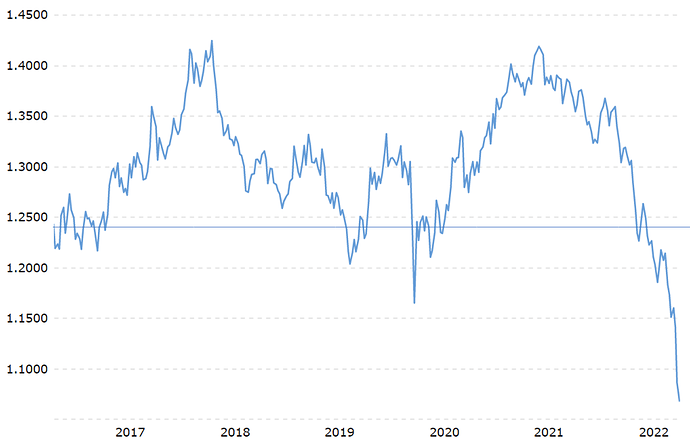 That’s since I first subscribed - everything above the line the cost was less than when I signed up, everything below it’s more expensive. So overall, I have done pretty well out of it.

But the price (of my legacy sub) has gone from about £8.90 to £11.40 or so within 2022 which is quite a big change in anyone’s book, even if the absolute cost is still relatively incidental.

This is a very good example of why our inflation is so bad… most commodities are traded in US$ so all the things that were getting more expensive anyway (nat gas, oil etc.) are just exacerbated. The oil price has dropped quite a bit in the last few months but our pump prices haven’t come down by nearly as much since the pound has weakened at the same time, cancelling it out…

The USD was week for a looong time,

It is always 7 days, although it can certainly seem longer.

Doh! Gotta fix that now that I see it

As far as other services that have legacy pricing….gym memberships. When I joined a gym at a certain price it was guaranteed for the life of my membership. I still pay the same monthly fee I did 15 years ago even though new members now pay 3x as much. I even know people who purchased a lifetime membership to a fitness club in the 90’s for less than $1000. This club was eventually bought out by Bally total fitness (which honored those deals) and then Bally’s was bought out by LA fitness (which still honored all previous membership deals) so that person has a lifetime membership to all la fitness clubs and they paid a one time fee to a local club 30 years ago…

In the past I’ve cancelled over summer when I’m racing and doing almost zero turbo and renewed at the end of the season. But if I do that now, will my monthly costs still be $12/month or will they be the higher value (ie. I think my partner is paying $20/month now)

if you cancel and rejoin you will be at the FULL cost $189 a year (whatever it is per month).

Thanks. I looked at my emails and in the past I re-joined at my old price so that news isn’t great. I guess they prefer the steady cash flow rather than have people turning off/on each year.

Yes of course, and it makes sense to incentivise people staying members year round rather than cancelling every summer…

Yep. I’m tempted by the yearly deal but I’m also racing less and therefore training less and like the option of not paying for something I’m not using. Will decide at the end of this season I guess. When winter hits I’ll more likely want to use the turbo so will probably kick it into a yearly plan.

For anyone struggling for finances, I don’t think you can beat TrainerDay Premium ($3.99 / month) plus Wahoo X Lite (free) (you can enter any RGT race or group ride with a free account, plus there’s always a couple of RGT roads available on Just Ride to use for free).

Did TR increase prices just a year ago? I could be wrong…

I’ve been a seasonal user of TR for 4 years and really enjoyed it. I’ll need to think about it more but doubt I’m coming back. To be fair, I tried a low volume plan for the first-time last winter and felt unprepared in the spring. I was reconsidering other options anyway. The plan was to do a more traditional base program and we can get that almost anywhere.

This might have been a good opportunity for TR to gain some brand devotion by making a public statement they will NOT increase prices during hard economic times. Nonetheless, they provide a great product but it’s getting too expensive too quickly.