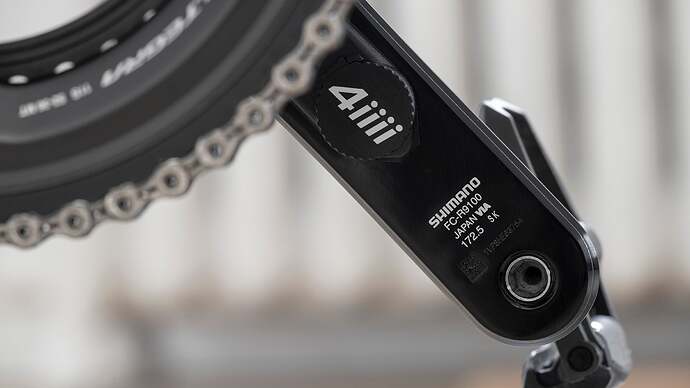 A solid power meter at a good price — with a huge battery-life claim of 800 hours. 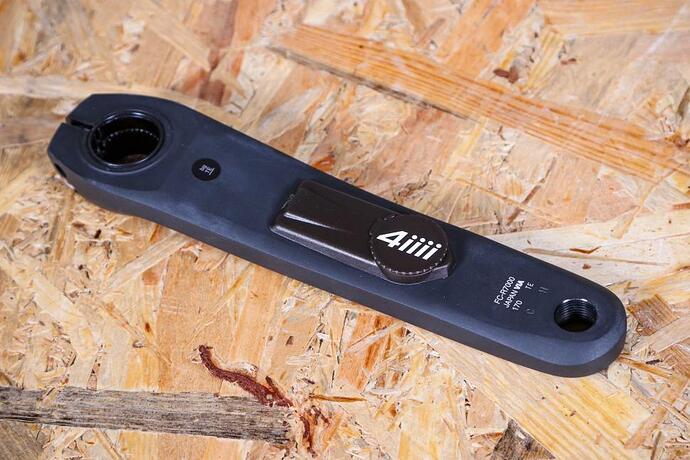 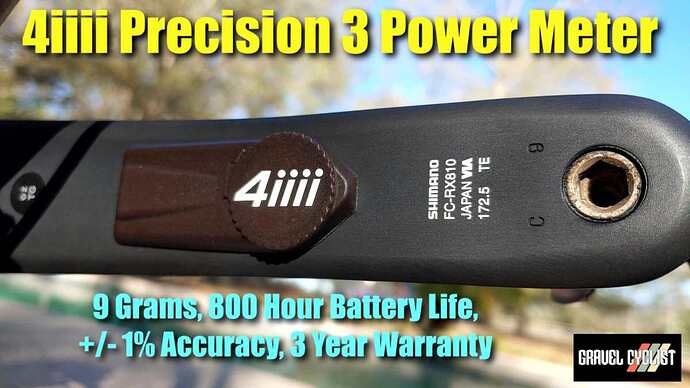 Canadian sports technology company 4iiii Innovations Inc. is excited to launch their most advanced power meter to date, PRECISION 3. “With up to 800 hours of battery life, +/- 1% accuracy, and weighing in at 9 grams, the PRECISION 3 Powermeter will... 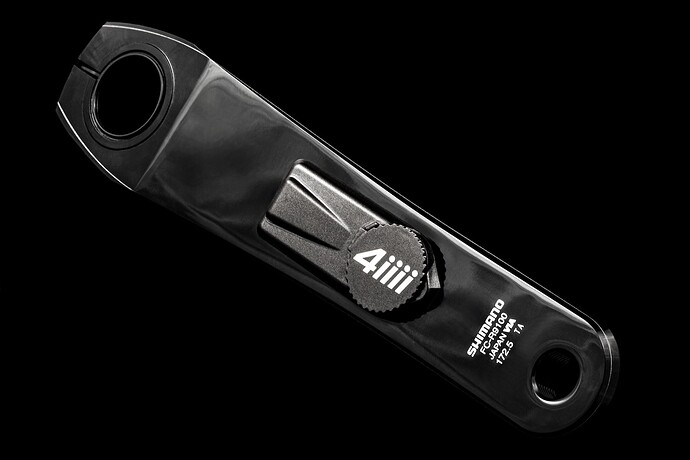 Canadian powerhouse 4iiii Innovations cut the weight of their crank arm-based power meter pod in half with the new PRECISION 3 power meter.

I’ll wait for @dcrainmaker and @GPLama before reading the paid ‘reviews’ on those sites.

Yup, I am waiting on the well established kings of testing so I can link their info.

But since it was introduced, I wanted at least the place holder for them to be set.

It would surprise me if the 4iii was less accurate and reliable than their prior crank arms. I had one of their PMs and it was always accurate and reliable. Compare that to my stages crank arms where I’ve killed two. But this is a sample size of one so it should be take. With a grain of a salt as I know people who’ve never had issues with their stages PMs.

Yeah, I won’t speak on behalf of Lama or Des, but in terms of myself, I’ve had a moderate pile of issues that wouldn’t be specific to me.

I’ve gone through numerous firmware updates, and they delivered another one this morning with a goal of it fixing at least some of my concerns. I haven’t had a chance yet today to ride.

Waiting for Ray and Shane to test these new PM’s make sense, but mostly because they have more stringent testing protocols and lengthier test periods, not because other reviews are “paid” for.

The challenges of a one-sided PM are well documented and known…in the case of the VN review above, those results are purely related to Ben, not necessarily the accuracy of a one-sided PM vs. a dual-sided (or a trainer).

That said, one-sided PM’s remain a great “gateway” into training with power for those who don’t want to drop $600-$1000 for a dual-sided PM. It is pretty amazing that they are still relevant ~10 years after they were first introduced, especially as prices on dual-sided meters have come down.

Imagine if SRAM had not thrown in the towel on PowerTap hubs and instead had invested in refining teh disc brake hub that was introduced late…all the accuracy of a dual-sided PM for roughly the cost of a single-side. As noted in the recent thread about race day wheels, with the advent of disc brakes, more and more people are not swapping wheels around these days, so needing multiple hubs for multiple wheelsets is becoming less of a challenge.

+1 to that! Single-sided 4iiii got me into power and I just upgraded to the dual POWRLINK.

I’ve had this meter in testing for a few months now. What should have been a quick review of a new hardware revision has been anything but. My video review/analysis was ready to publish yesterday when they dropped a new firmware a few hours prior to launch. This effectively invalidated all prior test data and possibly a lot of my review that was critical of a number flaws encountered with this meter. That data and review is now in the bin.

800 hour ha! For me thats a year or more. The 100 or 120 h on the Podiiiium not even close on mine. So annoying to have to put off the electrical tape and on again after few weeks so water doesnt get in through microusb and breaks PM like my first one. ( Hate comment ends here lol )

Yup, I am waiting on the well established kings of testing so I can link their info.

I sometimes wonder about these sample size of one tests. Yes they are very detail oriented and do a very good and hard job and provide all the data to back up what they say. But looking at their power data leads me to realize some people are much smoother at power output than other get people. That in itself can greatly influence the data you get off a power meter which some may be able to handle better than others but if the person doing the testing has smooth power output… I’m not saying this is easy to do, I think it would be incredibly hard to do.

Yes, I know power is never really smooth, but some are smoother than others. I do wish there was an actual metric for this variability in power. Standard deviation of rolling 5 second of power could be good but then that would be thrown off from when you change how much power you’re putting out. Maybe standard deviation of 5 second power where the slope of those 5 seconds is under x? Based on my numbers I know the smoothness depends on how much power I’m putting out so the final display would be a chart with power on the x axis and the standard deviation on the right

It would surprise me if the 4iii was less accurate and reliable than their prior crank arms.

Perhaps I was less lucky, but it wasn’t all smooth sailing for me. The first few weeks my 4iiii stuck to a 6800 Ultegra crankarm produced ridiculous power numbers. After a month or so it settled down and worked reliably for several years. But e. g. cadence was limited to 160 rpm, which isn’t a problem during normal use, but for things like speed drills it let to the unit basically giving up.

And perhaps I got unlucky, but I bought a used unit on an XTR crankarm and it failed within two weeks.

I don’t want to over emphasize the negative aspects of my experiences for N = 2, but it wasn’t completely smooth sailing.

The firmware on the old version always incorrectly reported 0% Left, 100% Right (on a left crank meter, no less!). Support said they were aware of the problem and fixing it…but this was 2 years ago

I think what killed the hub power meter was the users… People want to have the option for ceramic stuff, the lightest hub, the noisiest one… Plus they want a billion different deeps on their wheels… This is not cost effective.

It would have been cool if they would have developed a power meter that could be installed on any hub, externally, like the garmin speed sensor 2. That would probably have a larger market if the price was right (read price of a single side pm)

Mine worked for 4 rides. Then it wouldn’t calibrate, would send cadence to but not power to my Garmin. Sending it back…

How is everyone’s experience so far? I am on the fence for this but after seeing GPlama’s review…not sure but would be my only powermeter option.

Unless the two usual suspects give the green light, I’d either look for a Gen 2 unit or an alternative. I’m kinda surprised, because 4iiii’s previous units were delivering good power data (within the constraints that you have with a single-sided power meter).

If I were you and needed a power meter now, I’d look for something else, e. g. Assiomas or a Quarq power meter.

I was thinking the same. I just don’t know if the Gen2 will fit my frameset (traildonkey gravel frame), which i have yet to receive. i was confident that the Gen3 would fit and would send before getting my frame but the review got me skeptical. I just want to build and ride, not to wait for a crankarm to be factory installed. I’d be running a di2 GRX 2x crank. I considered the garmin xc100/200 but i love my xtr’s.

if all else fails, i’ll wait and see if Gen2 fits, then decide with or without a powermeter.

I’d still think your best bet are power meter pedals. Plus, replacing pedals is cheaper than replacing your crank. Otherwise, I’d look at a Rotor crank with one of their power meters. That’d be more expensive, but you’d get a DuraAce/Red-level crank with a good power meter.

Though I advocate against being early adopters…with the precision 3 I was one of the first to own an XT variant.
My reasoning (it sounded good to me at least) was the company’s reputation and past products.
And…then I almost stopped training because I kept on chasing the numbers up and down and I thought I am no good and that I had over reached with TR.
Following said review and 4iii’s almost immediate long awaited firmware update data started to make sense, but…only started.
They have a few issues which make current version almost the worst of the pack:

With their pretty quiet PR though they obviously have a blow to their precision 3 sales, which is contrary to any marketing logic…unless the 7 months since its outside testing proved to them it’s a write off.
It just looks bad from any angle.

thank you for your experience and it is unfortunate. although i am not a racer, i do like reliable and accurate data. i’ve been told from other source that if i’m not a serious racer that instant power data wouldn’t be important and keep power at 3 sec updates… i don’t believe i need to be elite level to want accuracy right? i like accuracy and the 4iiii gen 3 apparently doesn’t offer right out of box. if they can get this fixed before my frameset arrives i might reconsider but if they aren’t being transparent about fixing the issue, it will be difficult to work with them down the road, right?