Cp is generally higher than ftp for most people, simply because riding at Cp you are spending about half of your time above Cp. It is definitely not lower than ftp, at best they’ll be equal. For most people, tte at Cp is about 30 minutes.

I use an ftp of 275 when my Cp is estimated at 290. Anything above Cp is not a steady state and of limiting capabilities.

Are both those numbers from the same inscyd test? Spurious interpretation if so. If they are from two distant tests i can see why they don’t agree.

No certainly not. FTP is derived from WKO and last indoor test. Outdoor FTP is normally 280w…

INSCYD test was in July. Maybe now my CP of higher. But in this period i don’t really Care about my FTP that much. My goal is to become as aerobic as possible for a long Gran fondo with lots of climbing
(230km/5500hm)

Had some time left during lunch break so did a quick new lactate test. Start the steps from 195 till 225 with 10w increments every 8min (after gradual warmup 30min).
As you friends already mentioned, it confirmed my LT1 around 220W (visiblee in steps 215-225). But I also tracked the DFA alpha 1 on my garmin and before the 225W step, it was never below 0.75. So…maybe this works for me also ;-).

Have you tried the alphaHRV Garmin IQ app and viewed the result in Intervals.icu to see if it does line up with lactate. 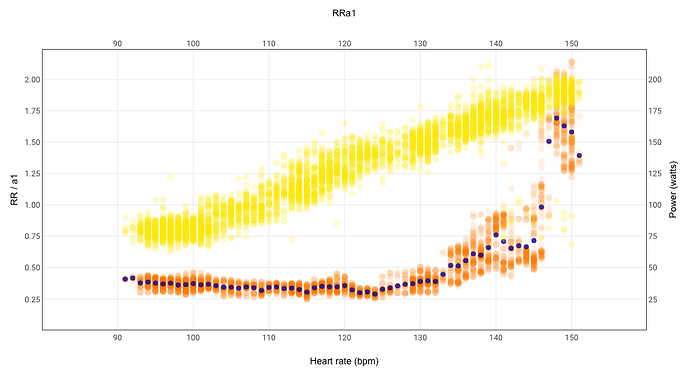 Have you tried the alphaHRV Garmin IQ app and viewed the result in Intervals.icu to see if it does line up with lactate.

I monitored the DFA real-time with the IQ app yes. And only within the 225W it went below 0.75, I can check it also in intervals.icu but for me it lines up pretty well with lactate.