Half the idea of the test is to ride to threshold using feel. Doing it in erg defeats that.

Yeah I’m familiar with it because Wed night worlds from March to October are all about doing 40-60 minutes at threshold.

I’m trying to put together an erg based test, for those times I can’t test outside. And to help others.

Thanks for the link to Hour Record. I didn’t know it existed and created my own workout for it.

That way you can test both your FTP and TTE. If you go to your exhaustion point, you’ll learn your TTE.

The article doesn’t describe what determines the exhaustion point for the test. Presumably it’s a drop-off in power since TTE is described as a downward kink in your power curve.

Right - for me the test ended before I was completely exhausted, but I think I was pretty close to it. Prior to the test, WKO5 pegged my TTE at 35 minutes, so I wanted to push further and selected a 45 minute version (progression #1) as a starting point. Next time, I will increase the test length (ugh) to see if I find my true TTE.

what was the wattage ramp rate at the end of the test? (ie the gradually increase after the interval at FTP)

I ended up using 8% over 10 minutes which was suggested earlier on this thread.

I did the test in ERG mode as I didn’t want the additional mental effort of holding target power - I wanted to focus on my physical ability, plus the mental stamina of not giving up. But, I was ready to drop out of ERG mode should my cadence fall below 75 rpm. Fortunately, it didn’t come to this. Perhaps for later tests I will do it in non-ERG mode.

I ended up using 8% over 10 minutes which was suggested earlier on this thread.

Did a quick first pass while in a meeting this morning: 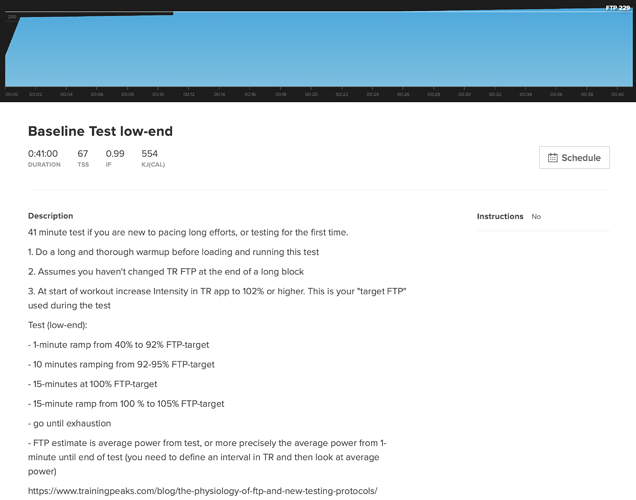 neat idea! i’m about to finish gen build LV towards the end of this month… given that the plan ends with a 3x 20’ FTP workout, it’d be a fun way to end the year with a bang on the 30th with the hour record test!

Inspired by this article, I did “Hour Record” here on TrainerRoad and the data from it gave me lifetime bests for mFTP and TTE in WKO5. The information is probably more relevant for me as a long course triathlete than results from the ramp test. For me holding 305 watts for an hour seems much easier than trying to get up to a minute over 400 watts in a MAP based ramp test.

I completely agree with you on this as a TT rider. Never got on with the ramp test, can’t understand why they moved to it really, it doesn’t seem popular amongst most coaches as a tool to set FTP.

I think the reasons that TR moved to it are largely:

All non-ramp tests that I am aware of have one or both of the above requirements. These requirements aren’t a good fit for people who are largely uncoached, and many are new to structured training. Going be feel doesn’t help, as the general users don’t know what FTP feels like.
My take is that the ramp test is chosen because it is viewed as the test with the best set of tradeoffs for the general Trainerroad population.
If you don’t have a pretty good idea of what your FTP is beforehand, Kolie’s tests aren’t going to give you good results either.

Great thread, thanks for all this info. I’ve been using TR for a couple of months & am not a fan of the ramp test. I’m grateful I had it to get me close to a starting FTP which I ended up bumping 5% after a couple of workouts. I did my second & did the same. I’m planning to assess with a different protocol next time & think I’ll have a pretty good idea, by feel, of where I should be. I’ll definitely be coming back to this thread & going through it again when that time comes.

Maybe we have lost the ability to feel FTP because of PMs. I know I would be at JRA in about 5 minutes without seeing the numbers. just sayin

Ed, exactly. Most of the time I totally defer to the athlete’s perception of FTP.

With my athletes (there’s a few here, hi!) I rarely suggest an outright ramp. It’s start for 10-15 minutes at what I’m 100% sure is below FTP, then easy build until you feel FTP. I add some descriptives in there. With the article I knew people would want some very direct numbers instead of just being told to feel their FTP.

Going past TTE is useful; in a lot of instances the lower power starting target is used for that purpose, so I can see a very distinct deflection point in the power curve. In about 1 in 10 tests I’ll determine someone’s FTP is different from test value, but usually by not more than 10w, and in most instances about 5w.

Thanks for chiming in here. I just completed my first attempt at the baseline test and I think it went pretty well. I ended up with an average power of 246 for the test, which is in line with the 244 I got from the ramp test a few weeks ago. This was the longest threshold interval that I have attempted, so it was a bit of a new experience. I set new power PRs for the 20-37 minute durations, which was a nice bonus.
One thing that is clear to me from this experience is that I have a ways to go regarding the mental toughness aspect of keeping going near then end of the intervals like this. I plan to continue mixing these in with the ramp tests as well and see how they correlate for me.

I do it usually once a month, increasing the intensity by 2% each time on my current FTP

In my experience, it’s not mental toughness so much as it’s reflective of a training goal. You can kill yourself as much as you want but there are various aspects of physiology (some of them neural but they’re not related to toughness) will hold you back. Learning to suffer is fine and necessary, but it’s not what’s holding most people back from doing more watts or going longer. This sport is about suffering, we’ve all learned to do it. So more watts isn’t always better, and it’s not necessarily your FTP. After a certain point, it becomes the other aspects of physiology that become limiters.

I’ve often how a greater ability to suffer affects a physiological marker like MLSS.

Did protocol 1 last night. Trainerroad FTP from ramp test is 317.

Felt very fresh going into the 10 minute build part, probably too much in the tank at then end. Think I will go for one of the 45 to 55 minute tests instead next time as I could have kept going if I held my power around 325 to 330 instead of raising it to 350 by the end of the 35 minutes.

Was pretty fun, definitely mentally easier than a normal ftp test and a better workout as well; probably more useful too, although I don’t get my MAP (don’t care too much about this at the moment though).

My personal jam is the progression 1 ftp test. I find it reliable and a lot less painful than the ramp test. I combine it with music that doesn’t get me too agitated so I keep listening to my legs. I think before this test I knew nothing about what threshold feels like. Here’s my last one: 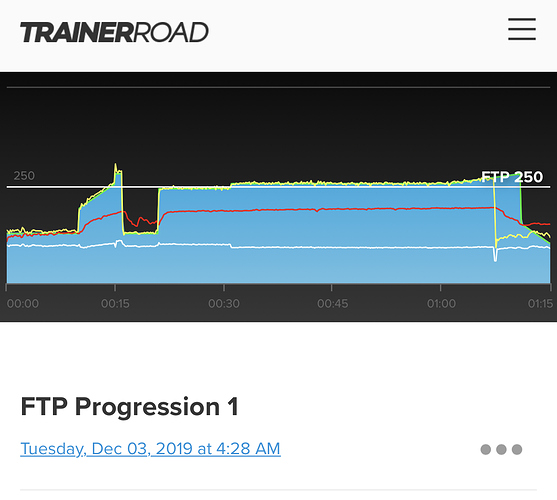 Unfortunately I’ve spent the last week with a high fever and a cough in bed and now I’m on vacation for eight days, so I’m mourning those early build gains as they leave my body.

I’ve often how a greater ability to suffer affects a physiological marker like MLSS.

In my testing, on me, n=1… suffering doesn’t change the physiologic steady state markers. I have a few friends I’ve tested so N = 4 where this holds true.

MLSS is trainable to some extent, but the ability to actually pedal a bike at MLSS for long periods at an RPE the rider deems maintainable is a training adaptation that matters a lot.

Put another way, my MLSS tested a few weeks ago is 230w. Tested indoors on my training set up in my basement. If you ask me to sit on the bike on that set-up and pedal 235w today for an hour or more my brain is going to be very unhappy. RPE 9-10. Mentally I doubt I’d get more than half hour in despite being at steady state lactate.

TL;DR - Training the Brain matters too. A lot.

Hope this is basically what you were asking and love to hear from others with good MLSS data.

I have but a very basic understanding of all of this, still need to read and reread a lot of this information to get a better grasp of it. But Darth, you mention how you’re training the brain to be able to do sustained efforts. But is six months of training at your MLSS for an hour really increasing your brain power, or are you just extending your TTE, and thus making RPE easier. If I’m understanding this incorrectly, feel free to correct me.

Side note, @empiricalcycling. Really loving your podcast, keep it up!

It’s either brain conditioning or some other adaptation. I think when folks accurately determine MLSS they are surprised to find it doesn’t move all that much but their RPE riding at that power level does. To be fair, I’ve only “studied” myself and a few other guys with decades of training and racing under their belts so that is not a cross section but rather good (cat 3) masters cyclists who always have a relatively high level of fitness. A person new to cycling or endurance sports may have different data trends. Would love to have data on myself for last 40 years from juniors through to masters. But alas, didn’t have the lactate meter then.

I’d love to understand more about all the factors (physiological and mental) involved in riding long periods right at a metric like MLSS. I find it fascinating.