I definitely feel like I’m on the extreme end of “Anaerobicly gifted” (or to put it negatively, “aerobicly remedial”). I do feel like the ftp my ramp test returned is high. How good a job will adaptive training and the “AI” ftp estimates do at correcting this? If I keep not completing my threshold intervals and it looks at my short term power on my outside rides will it learn? Or should I manually bump it down 5 or 10%?

The ramp test — just like any FTP test — uses a simple formula to convert the test result into an FTP. The ramp test measures maximum aerobic power (abbreviated with MAP), and TR sets your FTP as 75 % on that. This is no different than computing your FTP from a 20-minute test by subtracting 5 % from the power average you achieved for 20 minutes.

This is based on research and experience. However, humans are not all the same, so there is a distribution and this equation does not work well for many athletes. So you should validate your FTP test result and correct it accordingly. For most athletes, the relationship between e. g. MAP and FTP does not change very quickly. So if e. g. you find 73 % works better for you, then you should adapt the ramp test result accordingly, and verify that number from there.

A lot of digital ink is spilt on FTP tests here, but my advice is that you try to get a feel for riding exactly at threshold is. This is not something that comes to you immediately, but is something you have to learn. Once you have that dialed, you can follow any FTP test protocol (you could even guess based on experience) and verify that.

Another option these days is AI FTP. Again, don’t take that number as gospel, validate it with workouts.

When I was using the ramp test, I’d reduce the ramp test result by 5%. And that’s still probably a little too high - eg no way I could ride at the resulting FTP for 60 mins. Maybe 30 mins.

But I’ve calibrated my workouts using this approach so it works out OK. My FTP doesn’t change much, so I don’t bother to test anymore. Makes things easy.

Same for me. I’ve foregone the test for now and stick with AI estimate of FTP, which came out about 10% lower than what I’d expect at the beginning of my season. I can now do everything up to sweet spot rides at reasonable RPE in my aerobars, but have to increase intensity by about 10-15% to make vo2 hurt as it’s supposed to.

Compared to previous seasons when vo2 and above felt alright but everything below was a drag that burned me out this feels more sustainable. I hope it’s also more productive.

I don’t think that the assumption is true.
If you’re anaerobicly gifted- you can probably cheat way more watts out of the 20min test than a ramp test because the five minute depletion effort won’t touch the sides of your capabilities.

That used to be me- I’d usually be able to pick up the power in the last few mins of the 20 min test in order to finish totally spent and then would get an inflated number.

I do feel like the ftp my ramp test returned is high.

What makes you say that could be a thousand things, technical faults, environmental problems, health, fatigue and particular protocols and is argued here for years.

If you are doing TR and following a plan, FTP is only a small part of it. What is a big part, is your feedback.

So don’t worry much about your FTP value.

5-10% is within the margin of error adaptive training can handle, just answer the post ride survey honestly and don’t be to proud to accept downgrades in workouts

10% is the difference between sweet spot and threshold, and makes a huge difference

I would just go with the number and see what happens. I feel like mine is consistently too high if you’re actually thinking of it as an “hour power” number (and I wouldn’t use it to pace), but if it’s just the number it takes to get you the right workouts, it’s fine. It’s not like the first (or 2nd or 10th or…) workout TR will give you is 1x60 at 100%.

But TR has a wide range of sweet spot workouts going as Iow as 75% of ftp (same applies to threshold, so even if ftp is 10% you can still do workouts in the correct zone)

75% wouldn’t really be sweet spot with an accurate ftp. Generally bottom end can be considered 85% but I think more common consensus is 88%

and do those progress time in zone building up to like, 3x30 at 75%? or do they expect you to reach the typical sweet spot 88-94% workouts?

there are no 3x30 minute sweetspot workouts in the LV and MV programs but looking at the 1.5h level 3-4 you can come close to those, eg 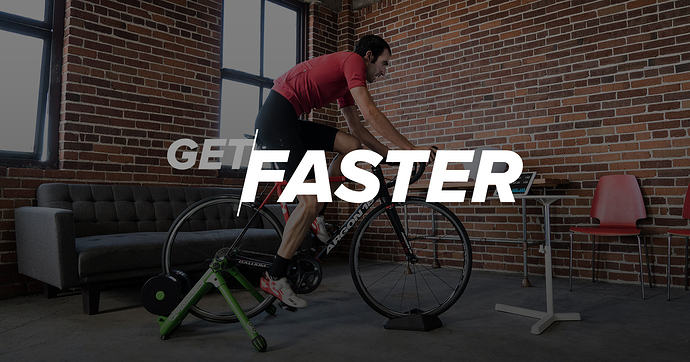 If you didn’t want to do a different test I’d lower it 10% and see how it goes.

The other way to go is to warm up and then start riding at your ftp. If you are struggling after 10-15 minutes then you’ll know it’s too high.

agreed, but at that point why not just do a 20m test or a kolie moore test to begin with?

The ramp test — just like any FTP test — uses a simple formula to convert the test result into an FTP. The ramp test measures maximum aerobic power (abbreviated with MAP), and TR sets your FTP as 75 % on that.

+1 on this. If the TR FTP is measuring anything accurately, it’s MAP (and that’s still just a rough estimate). The 75% adjustment to come up with FTP is going to vary by individual and stage of training, but that’s typically good enough to serve as a baseline for training zones. Before before zone-specific progression levels, this would often make training in one zone much harder than another because using a single FTP baseline is a limited approach. Zone-level progression basically modifies the baseline for each zone rather than keying off a single number. With progression by zone, you could easily ditch FTP altogether rather than using a modifier within each zone, but FTP has become such a ubiquitous metric that it would be tough to stop that boat.

If someone wants to know their true physiological FTP (essentially where lactate generation/processing are at the hairy intersection), I find tight over/under intervals to be a quick way to dial FTP in within a handful of watts. Your over’s should be slowly easing you off the cliff and your unders should be allowing you to get back on solid ground.

Again, in the world of adaptive training and zone-level progression, I find FTP to pretty unimportant (especially if you aren’t training right around that zone). It can be very important for other reasons like pacing and for measuring self worth…

When you say measuring stick, do you mean as a starting point or an ending point for FTP progression. Personally, I agree that if I can complete something like Palisades that my FTP is close, but to the OP’s question, is it a starting point? I’d say TR’s typical progression would have someone starting at much lower PLs (for threshold) after an FTP test with a progression to build to something like Palisades before retesting. It is not uncommon to see folks failing Threshold 5.0 workouts, so 5.0-5.5 is a bit of a ceiling for many/most hit before they start to reset their progression. Personally, I think this is a bit of a mistake and common pitfall for folks and an indication of a “too high” FTP setting. Lately I have intended to be more conservative with my FTP number so that I can do harder workouts successfully because i think a) those harder workouts have more of the type of efforts that elicit adaptations, such as longer intervals and b) I’m less likely to burn out doing too much intensity. My suggestion to the OP is to reduce that FTP number and let the progression levels drive more than the FTP. I’d rather barely complete 7 or 8.0 workout with a too low FTP setting than complete a 3 or 4.0 with a too high FTP.

The other thing I’ll say is that your anaerobic “gift” is probably not as much genetic gift as it is a lack of riding long, low and slow enough to develop the aerobic base. I’d definitely suggest doing more of that.

What I’m saying is that FTP is largely irrelevant in the context of zone-based progression levels. My FTP can be “off” by 10% either way and the feedback from workouts should quickly adjust future workouts to be appropriate by changing the progression level within that zone. So, yeah, FTP was kind of used as a starting point, but you would get to the same path very quickly just by sticking a finger in the air and guessing a reasonable starting point FTP.

As far as using Palisades as an FTP measuring stick, I’m talking about actually determining your physiological FTP, not using it as a baseline for training. Those 2 things aren’t mutually exclusive (particularly if you are training around that zone), but I see them as being very different and requiring different levels of accuracy. With the concept of zone progression, your FTP can be off and you’ll ultimately end up doing the same workouts in the end based on your feedback and adaptive training. If you are using FTP to pace a ~1 hour TT, being off by 10 watts can ruin your day.

I had AI FTP recommend a higher FTP recently that I rejected because I’m still in the “meaty” part of my progression curve during base training and using a higher FTP to set workout sessions as I move into build would not have done me any favors. That, and I just knew that the number was higher than my physiological FTP. If I had accepted the new FTP, it wouldn’t have really changed the work I was doing because it would have just dropped the progression levels in my base training to keep building incrementally from where I left off with the last FTP. I could have taken the new FTP and just struggled with my first couple build workouts until AT adjusted, but I just mentally don’t like having an overstated FTP and I don’t like setting myself up for failure on high intensity workouts. If I was sitting at really high progression levels, I would have had to take the new FTP to keep progressing in the zones I’m working, but that’s not typically a problem.