How Long To Get Comfortable Running

This is also highly variable based on age.

I ran cross country in high school. We were quickly doing 5-7+ mile runs after a few weeks of training. I could do that at 15 years old. That would kill me at 56 years old.

In my twenties when I was racing bicycles, I used to start running in the fall after the time change because I wasn’t going to ride at dusk or in the dark. I could effortlessly switch to running 2-3x per week in my twenties while still doing 50 mile rides on the weekend.

I think Barry P says it all in the write-ups. I completely agree that a new runner that tries to jump in at 20 or 30 miles a week is headed for injury. However, a reasonably fit person that starts at 10 miles a week at a slow (for them) pace and builds gradually will usually harden up without even feeling stressed. At least that’s what I’ve seen. Similar to the TR approach, the Barry P plan provides structure and a progressive build with periodic recovery to a level that fits the individual. No vested interest on my part, but I’ve seen it work wonders for a lot of people.

Hey @KorbenDallas. I started running again this year. It took me about 6 weeks to adapt. If you are using TR planbuilder running workouts, don’t. They will leave you injured for sure. I mean, I’m almost 100% sure you will wind up with an injury if you go from no running to TR suggested running plans.

This year I wanted to check ‘Triathlon Podium Finish’ off the bucket list so I put a TR triathlon plan on my calendar. The TR plan starts you off running 9 to 12 miles a week. Sometimes with sprints.

That was way too much for me! Yikes. I had not done any serious running since maybe 2017? So I ignored the TR suggested running plan & most often try to get some kids to run with me. Kids act as a natural governor on your run…they never want too go to far…they only rarely want to go too fast & even then not fast for very long…they always see stuff to stop and look at…they always provide entertaining banter. We started running 3/4’s of a mile at ~13min/mile pace. Over the course of a few weeks I worked my way up to 2 miles.

My knees and hips really paid the price even at that very moderate pace. At the end of week 3 I started taking 500mg of Hyaluronic Acid daily & that was like flipping a switch. I went from thinking I was going to need a hip replacement to no joint discomfort. I washed it out and went back on…it really was the Hyaluronic. I don’t believe it for a minute, still. That is a large molecule and there is no Hyaluronic Acid ‘transporter’ in the gut so I don’t believe for a minute oral hyaluronic acid can have that much positive benefit. So, probably, there is some other unlisted ingredient in the brand I’m using.

You been cycling for a long time, so fitness is there. Although running muscles are different, there are some common areas. You just need to reinforce the weak areas.

My recommendation. Make sure you have appropriate running shoes.and start slower than you think you are capable of.

Like if you think you can run a 6 minute mile, you probably should start running 1 or 2 miles in the 10 minutes mile range. Add no more than 10% weekly.

@Brennus interesting. I’ve never heard of Hyaluronic acid. By mouth or apply to skin? Does it matter?

Make sure you have appropriate running shoes.

Recommendations? Do runners use orthotics like cyclist? I have uber high arches.

“I’ve never heard of Hyaluronic acid. By mouth or apply to skin? Does it matter?”

Just take 500mg in capsule form. I just want to stess that it’s just super hard to believe it works without injecting it straight into the joint…which is why I say there might be something else in the brand I’m using that is not reflected on the label. 72hrs after I start taking it the difference is obvious to me. Not like glucosamine sulfate where you almost have to hypnotize yourself into believing it works. But also not like an NSAID where you know it’s working 30 minutes after you take it.

“Recommendations? Do runners use orthotics like cyclist? I have uber high arches.”

I bought a pair of big, fat Hoka running shoes.

If you haven’t run in a long time, say years, I would highly recommend going to a running store and try to get a recommendation.

Many have treadmill you can use to try shoes and see how they feel. Some also have exchange policies that let you change your shoes if they don’t fit or dont work for you…

Like most things in life, running shoes are very personal. What I like may not be the best option for you.

I personally like the Reebok float ride energy.
Some find it too Firm. I think is a good balance.

And regarding of orthodics, many run stores will try to sell you one. They are cheap to make and give them huge profits margins. I would first try to run on shoes as they come, and if you start noticing aches on places where they shouldn’t be any, then maybe try insoles…

Actually, the BarryP plan IS meant to someone who is new to running.

It worked like magic for me, despite having hypermobile joints, which means weaker than average tendons, ligaments (and even bones)…and the history of overuse injuries from sports so typical of us bendy folk.

NB There are a few big caveats to BarryP:

BEFORE
On 3x per week of running, with decent bike fitness and normal weight (40s female, 130lb, 165cm), I could never get beyond 30km/week without an injury, and many were significant: chronic achilles tendonitis and tibia stress fracture being the most notable.

WHAT PROMPTED THE SWITCH
while doing a very easy ‘return to running’ program (after my upteenth injury break) that had me run-walking 5x/week I found it enjoyable, but when I switched to running 2-3x/week I felt like crap.

At the time I had no goal aside from being able to run multiple times a week without injury.

(to determine starting volume, you take avg of previous 4 weeks of running. I found it easier to run by time rather than distance).

In my case, the big win was being able to handle the volume without any injuries. The bonus was having runs get slightly faster for less effort. But if you google ‘BarryP run plan’ you’ll find plenty of more robust folks who see considerably higher performance gains.

EPILOGUE
During my BarryP experiment, running was going so well that I had registered for the Paris half marathon on March 1. I had only ever run a half-marathon once before, in 2007, and I had to walk the final 3 km due to knee pain (finished in 2h20).

To prepare for the distance (I was aiming for 2hrs), in Feb every other week the long run was an ‘ultra-long’. Normally with BarryP, the long run shouldn’t be more than 3x your short run.

That remains my longest run ever, since the Paris half-marathon, like everything else, got cancelled cuz of Covid. Including running outside (France had some crazy law restricting us to a 1km radius of home).

Since then I haven’t returned to running because Life Happened. However, Life has since settled and I’ve been hankering to return to running so now I’m kinda psyched…

How long were you doing ~30km weeks before you started the BarryP plan?

I don’t know the BarryP plan, but an injured friend of mine got something similar with his PT. High frequency running. Never less than 4x/week. No more than 6.
The beginning is ridiculous, like 3x(1 min walk, 1 min run). The run should be easy, this is not speed running. Who’s going to put on shoes to jog for 3 min ?!?
But by the end of the “return from injury/new to running” plan, you should be able to run 30min, 4x/week. Then speed work can start
This looks something like this : 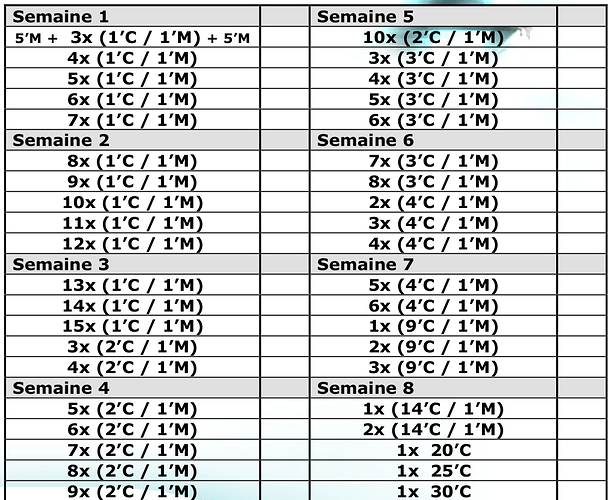 I’m not sure that would fit in a time crunched cyclist schedule, but just wanted to share his experience. (He now enjoys running more than ever)

I had last run 30km/per week in Summer of 2017 (running usually 3x, max 4x per week). I had an online running coach and had been doing relatively well, only a minor injury in the 8 month period I was coached. Then I got a back injury.

In Oct 2017 started training for Etape du Tour and it was all about the bike. I tried to do a bit of running (eg 10km/week) but that didn’t work for my back.

Autumn 2018 I slowly resumed running but didn’t get beyond 23km/week in Nov.

Again tried in spring 2019 but couldn’t go beyond 18km of run-walking before getting a hip injury. Took rest from sports for 2 months, resumed biking in August.

The ‘return to running’ program that I did just before starting Barry P began in September and had me walk-running 4-5x per week over 3 weeks until I could run 30min continuously. It totalled 18-19km per week of progressively longer run-walk intervals.

Then I did 3 weeks of 2-3x running per week, respectively running 18km, 20km, and 12km/weeks. These were the weeks that felt like crap and prompted me to shake things up.

Excellent! Thanks for the info!

I’ve just been run/walking my way back into running shape using a slightly varied Maffetone Method. I don’t use his HR calculations otherwise I think I’d be working to hard. I just aim to stay below 65% of my useable HR = (.65 * (Max HR - Resting HR)). I’m about 20 runs in (4-5 hours a week) and things are progressing nicely. Avg pace has increased from 7:40 min/km to around 6:40 min/km so naturally the KM per week are increasing a bit as well. I haven’t felt the need to increase or decrease the 4-5 hours a week at this point so I think I found a pretty solid volume and intensity for me and it helps me supplement a few more hours of cardio into the schedule compared to just cycling.

Other things that come to mind: