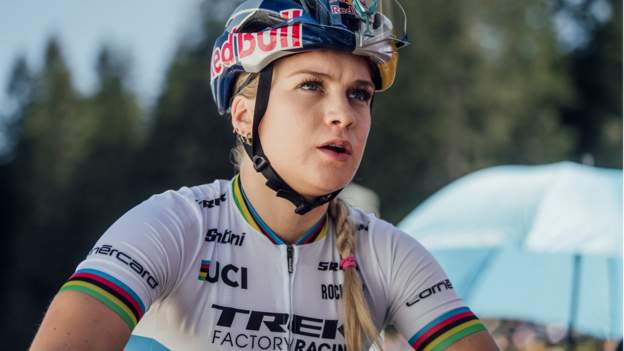 Britain's mountain bike cross-country world champion Evie Richards on the mental and physical issues she overcame to reach the summit of her sport.

Just a story that I thought would be worth sharing. Some revealing moments…

In 2019, Evie used part of our local cyclo-cross league to get miles in her legs. She raced against my wife and her teammates. Yes, she won every race by a country mile but, that’s not the point.

This young lady rocked up to the races, spoke to all the racers, shared jokes on the start line and offered encouragement. Her sponsor, Redbull came along to two of the races and hosted a party for everyone.

Evie was happy to chat after the races and spend plenty of time signing items and taking photos.

In those moments, I felt that she shone. A professional, happy to mix it with amateurs and willing to get to know her fans.

For me, she is one of the greats. I don’t care that she’s English and lives a handful of miles from me. I care that she showed how fantastic she is as a person. Hope her is career is long and glorious.

Evie is a pure ray of sunshine. And I hope people see this is as a cautionary tale for all athletes, but especially for those of us with daughters coming up in sports. I am very careful and deliberate in how I speak to my 12yo about food.

I was raised in a pretty demanding household when it came to athletics and performance. The coaches in the programs that I had through high school were just absolutely monstrous. There was no such thing as thin enough. In jr high, our VB coach would rove the lunchroom and comment on the amount of food on our plates. So a couple of us just stopped eating.

Say what you want about the pressures of society and social media on a girl’s sense of being, but I really don’t think that they have anything on the kind of pure devastation that a coach can inflict.