To the best of my knowledge, yes (based on comments in the Saris FB group).

I never had the issue and have always used an additional fan at the intake to be safe.

Update on my situation that i posted on previously. Elite support is at least now trying to come up with a more customer orientated solution - offerring to try get a replacement trainer out to me. Not sure this is actually going to solve what appears to be a more systemic issue but at least credit to them in acknowledging the issue and trying to address it a bit more constructively than previously.

With or without PowerMatch? Mine seems to be slow to response.

Wahoo: bothering to test on any app aside from Zwift via BT

I have a ticket with Wahoo about their Fitness App. They keep arguing with me about the numbers being reported in sensor info and the toggle buttons for my Kickr v1, that don’t work.

They keep asking for more logs and I tell them to just load the app and test it. They seem reluctant to do it. I’m just astounded by this. It’s really disheartening. Now, I understand that these are support people and not the SW engineers, but it’s still a ridiculous approach. At my work, when there’s a problem report, the QA guys replicate the problem and file a bug with engineering. Why is Wahoo so different? I can’t figure this out. It’s been weeks of back and forth…for toggle buttons and the sensor info screen that doesn’t work. As of now, I can’t pair my Kickr v1 with my power meter. I need to do this because the power meter on the v1 is horrible and drifts all over the place. Fortunately there’s power match in TR and Zwift, or I would be having an incredibly hard time with this…but the fast tabata style intervals are hard to do with the power match.

You seem to be in the know…but is the H1, H2, H3 all the same platform and just firmware differences? H3 has a new belt drive system, but other than that, it looks to be identical?

The accuracy difference between H1 and H2 was either a tolerance issue or a firmware change?

If you find a prior Kickr17 refurbished, that is a good buy.

H1 and H2 are very similar if not identical. I’d have to revisit DC Rainmaker’s site to be sure.

The H3 is redone with a new belt style and pulley path, for the new “quiet” version.

I’m interested in your comments above, as I have a Suito and am experiencing both problems. Power reads around 10-15% lower than my Stages power meter (and just feels low compared with all other power data I’ve looked at in the past), and I also experience quite a bit of grindy vibration feel on Zwift on any incline of 3% or more, as well as when descending at speed.

I have contacted Elite who are replying, but not particularly helpfully - they have asked me to try to take a video of the vibration (I don’t know if it’s visible, I can feel it through my feet though!). Would you have any suggestions as to how best to approach this - basically I feel as if the unit needs replacing, but not sure how to get them to acknowledge that.

I was able to send a video of mine. Pedal it all the way up on a low resistance as fast as you can get it, and have your phone ready to film it will spin for about 10-15 seconds and you should be able to get it on tape.

The problem, is that the “media” specialized on reviewing these devices, is not payed by those companies, BUT by the shops that will sell the trainers, and they get a fee for each sale made through the coupon found on their site… SO, if they say this unit is bad, this other unit is bad, they would get no money. If they put on their site the kind of information we read here, the people reviewing those devices get zero euros… that’s the problem. If those people say “gentlemen, this device is the biggest piece of crap I have ever seen in my life”, comapnies would learn to do things the right way. But they found how to do the wrong thing, but the profitable thing for them…

Ultimately I think you need to choose witch “media” you consume. I trust that my favorite 2 reviewers have gotten themselves in trouble for calling the brands out in the past.

No, there is no option C really. If option A and option B are crap already, option C will have no distribution in your country and terrible customer service. People will stay with what they have or wait for next year.

Any update from anyone using suito?

I am having an issue with some low level vibration on my direto 2 which is irritating, I can return under warranty and pay a bit more for the suito. I have read @dcrainmaker review where he states suito reacts quicker than direto in erg mode, if this is the case i think it would be worthwhile paying extra.

Have you read the comments at the bottom of the DCR post?
There is a TON of discussion on the issues currently seen by many users.

thanks I will have a read.

Seems like a lottery as to getting a good unit or not, which is the same as replacing my direto 2, i’m either going to get another bad one or a good one, might as well take the lottery with the chance of getting a good suito, which dcr has repeated in comments is better in erg mode. I’m a bit locked in to my local chain store and they only have those + the Tacx Flux 2 for me to exchange with.

Does my trainer need a firmware update?

Check by using the Upgrado app. 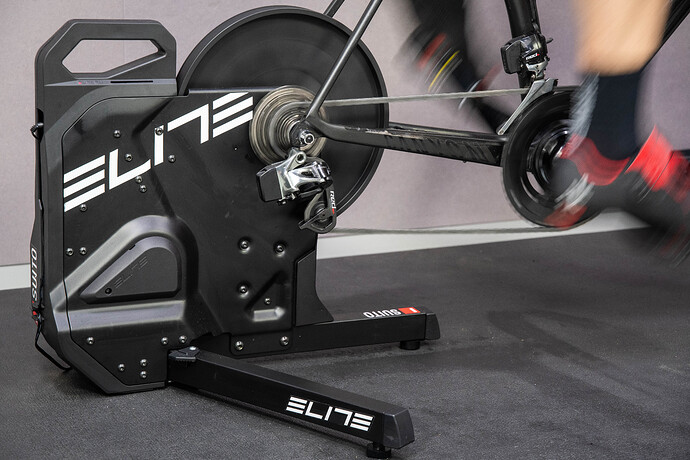 It’s been about five months since the Elite Suito was first announced back in July. The Suito made a name for itself by essentially copying the same Elite formula as a few years ago: Offer a good medium-range product that

Wanted to give an update here. As per above in thread i needed to return the first unit. I aapreciated that Elite did stand behind their product. The second unit has been great so far and DC Rainmaker sums up my experience closely.

Today I was doing workout on my Garmin Edge and Suito (as usual) and when I changed resistance from level two to level one, resistance somehow went too high (probably maximum) and I cannot change it. I’m chainging the resistance level on garmin (and also on myETraining app) and I can hear the sound but resistance is the same. I cannot calibrate it because i cannot get 30kmh… What can I do?

Just a quick thought you haven’t accidently got it paired to TR using ERG as well as the ETraining app. I have done that before