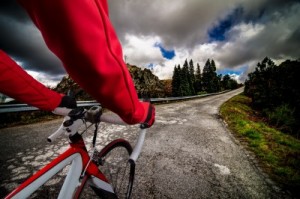 I am doubtlessly amongst the staunchest proponents of indoor cycling and its advantages over outdoor training, but consequently I’m also routinely faced with the annual terrorfest that is my first, fast outdoor group ride following any extended indoor riding block.

Necessarily, I’ve intentionally diminished this fear component by forcing myself outdoors more frequently – at least once every 2 weeks even in the worst weather conditions, weekly otherwise – in a sincere effort to make less evident my penchant for the controlled training environment offered by my MacBook, KICKR & TrainerRoad software.

And I recommend you do the same because for those of us who predominantly train indoors, the expense of improper or unpolished handling skills can exact a heavy toll both in terms of ride performance as well as a more general decline in outdoor enjoyment not to mention rider safety. Nobody likes riding near the nervous rider(s) within the pack, much less being that nervous rider, so practicing & improving our handling skills are not only personal incentives aimed at furthering our own enjoyment & safety but respectful duties to those who race or ride with us.

As with most things performance-related, bike handling aptitude comes down to the same two foundational components I exalt when I speak of anything having to do with riding your bike faster: experience & relaxation. Experience comes with time and relaxation comes with experience, so what’s the simple takeaway? Ride your bike, outside sometimes! And do it in direct proportion to the level of skill you’ll require when it comes time to pin on a number for a Cat 3 criterium, participate in your first gran fondo or triathlon, or jump into a Saturday drop ride. And clearly, the level of your handling skills is relative to not only the events in which you take part but also the level of competition you face should you be amongst the racing crowd. For example, a century rider doesn’t necessarily need to know how to successfully & repeatedly bomb a 90-degree turn at 28mph closely surrounded by other riders, but the same principles that safely guide these speed demons through tight turns apply to basically any turn done at reasonable speed.

So when it comes time to head outdoors, the following are a few tips that could keep you from gripping your bars so hard your wrists ache or from scrubbing off valuable speed in a corner, and here’s hoping they’ll help you more safely enjoy the challenge, fitness & speed inherent in riding by yourself or in a group. Part 1 of this post will cover skills you can work on while riding solo and Part 2 will cover skills more pertinent to pack riding.

This could easily be (and is elsewhere) an article all on its own, so without delving too deeply into the difference between steering & turning, to speak nothing of counter-steering, suffice it to say that your body goes where your hips point. I’ve heard this described by Selene Yeager as steering with your navel or third eye, but the idea is consistent regardless of its description in that your bike goes where your body points it, and as with many things, the hips are the center of the action. Ever ridden with your hands off the bars? It’s perhaps the simplest way to drive this point home because it illustrates how dominant the hips are when it comes to your line of travel. So next time your riding outdoors, simply unweight your hands a bit but leave them on the bars. Gain a feel for the way your bike goes where your hips direct it and over time you’ll rely less on your arms & handlebars and more on your body’s overall position relative to the bike & the ground.

As much a matter of confidence as skill, descending boils down to where you’re looking, your control of the bike, and your position on the bike. First, always look at the exit of your turn. This holds true when it’s the other side of a street corner on a flat road but is especially important at 30, 40, 50mph during a curvy descent. If you’re looking too closely in front of your bike, the tendency is to micromanage your turn which can lead to surprises should the arc of the turn sharpen, surprises that usually involve braking & subsequently loss of control. So eye the exit of your turn by looking as far up the road as possible while occasionally & very briefly scanning the road directly in front of you. Practice this at comfortable speeds and before you know it, you’ll find yourself smoothly carving faster and faster turns without raising the hair on the back of your neck. Control of the bike can be a matter of relaxation, minimal or no braking, and pedaling when the road allows it. As far as body positioning, simply recognize that a low center of gravity is optimal, so bend your elbows, bring your body closer to your bike, and keep your head more in front of your body rather than above it.

3. Moving In/Out of the Saddle

This is a good skill to tackle on your own so that when you’re riding in a group you don’t touch wheels with trailing riders. Too often when riding up a climb glued to another rider’s wheel, I’m forced to anticipate a backward bike lunge when the guy in front of me stands. Occasionally though, I’m impressed by a rider who stands in such a smooth & fluid manner that our pace remains unaffected. This is accomplished by a properly timed shift (down a gear or two when standing, up a gear or two when sitting) that precedes your change in position, a smooth pedalstroke which avoids surges, and my least favorite, overused and oversimplified term of our day & age, “core stability”. If you find yourself leaping from the saddle or plopping back into it, practice these shifts in position as though another rider’s safety depends on it by rising in a highly controlled manner that doesn’t affect your speed and sitting so gracefully that it might give the rider behind you the impression you’re nursing a saddle sore. And in the process, you’ll become a less herky-jerky (read: wasteful & potentially dangerous) rider!

Again, another topic that could absorb an entire post, I’ll narrow this down to timing, pressure, and control. The timing of your braking is most germane with respect to turning and this is simply a matter of braking before your turn such that you’re off the brakes just prior to the entry of your turn. The pressure you apply to your brakes will vary, but should you desire to remain in control of your bike (guessing you do) then you recognize that braking is usually a matter of feathering the brakes to slightly reduce your speed or applying stronger but even pressure to dramatically reduce your speed. As long as you acknowledge that braking reduces your level of control, it’s more likely you’ll avoid robbing yourself of said control by overutilizing your brakes.

5. Balancing on Your Bike

It was hard to decide whether to lead or conclude with this point because it dramatically affects the other 4 bike handling recommendations. If you don’t feel balanced on your bike, whether seated, standing, in the drops or on the hoods, you’re pretty much doomed from the start when it comes to proficiently turning, descending, transitioning in & out of the saddle, and braking. So common sense dictates a proper bike fit is crucial when it comes to adept bike handling. With a proper fit out of the way, your next task is to even out the pressure between your contact points, i.e. hands, feet, sit bones. Once you feel that your weight is evenly distributed on the bike – something that changes frequently as you fine-tune your position relative to your ride’s current demands – the final matter is balance in the literal sense. There are a number of drills (thanks, Josh Horowitz) that can help you improve how well you control your bike whether riding slowly, turning, or careening down a mountain road.

Check back for Part 2 of this post where I’ll offer some tips on making the most of bike handling skills during your group rides. Until then, train smart, ride hard, have fun.

How to Find the Right Wheel in a Sprint