Having a discussion elsewhere with a guy about calculating calories for a massive ride.

I was thinking that say you had a daily eg. 2000 cal BMR from just existing, walking and doing stuff. You would then add your ride calories on top of that.

Now he’s saying that the total for the day would just be 7700KJ because BMR is already factored into the ride’s KJ total.

So because you’ve ridden all day basically, your total for the day will be 7700KJ.

Anyone know how to calculate this?

Of course, if that ride was done in 90 degree heat, then 2000kj of work hit the powermeter, but the extra caloric expenditure of core temp regulation made it more than 2000 cal.

Let appetite and the scale be your guides. If you are maintaining the same weight, you’re eating enough. If you’re losing 1lb per week, you’re cutting 500 cal a day.

I’ve been doing 2000kj workouts most days this summer, and weight has been stable at 158. I’ve been eating about 3500 calories a day. BMR is ~1500. Don’t know about how many calories regular daily moving around has burned, but probably not that many. Say 200 max.

Ah! that’s brilliant thanks. Never knew it worked like that. I’ve been basically over estimating calorie usage.

Thought the power meter KJ value was simply an isolated value that looked at energy needed to produce that power exclusively and didn’t account for BMR.

I always just add on workout calories to standard daily amount. I figure that was extra work expended. The standard calories to stay alive etc were still expended on top of the workout.

HR based formulas may include an estimate of BMR. This is one of the reasons that gym cardio equipment has a reputation for overreporting calories. With a proper power meter, though, you’ve go a pretty bang-on number of extra calories spent. If you’re trying to lose weight, by all means don’t eat it all back, otherwise you should.

The KJ values I’m talking about are taken from a power meter. Are you saying @RobertK 's breakdown of how it works isn’t the case and that BMR isn’t factored into the KJ value it gives you?

eg. on Strava it says ‘total work’ and gives a value in KJ. I’m thinking this number is pulled directly from the power meter.

Roberts breakdown doesnt sit quite right with me but I’m still struggling to work out exactly why, so bear with me.

KJs from a power meter are calculated from watts. Watts are a measure of the work your legs are doing. Your PM isnt measuring the work your body is doing to stay alive. Youre keeping yourself alive whilst simultaneously pushing hard on the pedals.

So it doesnt seem correct that, just because youre cycling, your body isnt still doing its normal work to keep your basic bodily systems functioning.

Thought the power meter KJ value was simply an isolated value that looked at energy needed to produce that power exclusively and didn’t account for BMR.

It is isolated, and does not account for BMR.

If you have a proper bike power meter you’re getting real-work done (but drivetrain losses! Oye, this stuff is complicated). I’m just saying a lot of cheap gym equipment will guess based on your age/weight and HR if you put that in at the beginning of the workout. Those kinds of systems notoriously inflate your “calories burned” (because it’s depressing how long it takes to burn 100kcal), and one way to do that is include BMR. This makes joe-schmo’s happier and is probably what your friend is thinking about. You can guesstimate that BMR for an “average” adult male is like 90kcal/hour. If you do an hour on such a machine an extra 90kcals will make a big difference on a 400 or 500kcal’s workout.

I wasn’t sure that your kJ figures were measured or not. My elemnt bolt will calculate a kJ burned separately from the power meter figure, and it’s usually different. For a recent ride my quarq reports 2782kJ while the HR-based computation reports 2912KCal (yes mixed units… but they’re different, and conversion requires assumptions). For that same ride, TR says 2800kJ/kCal while Strava says 2912kCal but 2804kJ.

Here’s an article on the nitty-gritty of conversion: 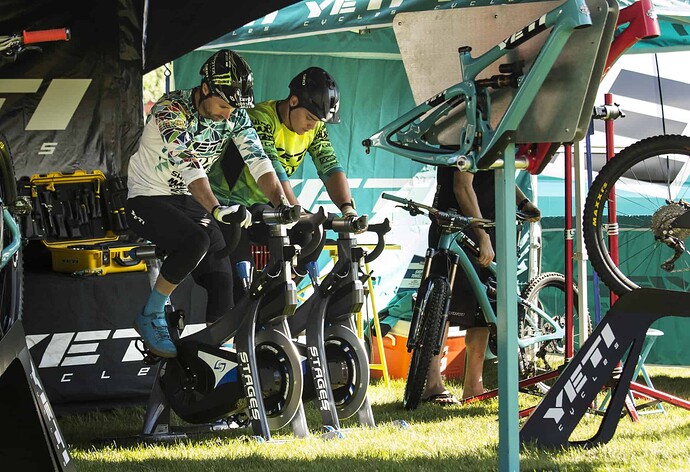 Watts to kJs to Kcals

Understanding watts, kilojoules and kilocalories and what they mean for improving cycling performance using Stages Power.

It doesn’t get into BMR, but you can easily see there is variability and at the end of the day it’s just approximations. Heck, nutrition facts aren’t 100% spot on either, so even if you knew exactly your kCal burn, your food might not be exactly what you think it is, either.

Can you give any more explanation about your approach?

Im curious why you say that BMR should be subtracted from workout calories.

Can you give any more explanation about your approach?

I’m not sure I agree with what he’s doing, but basically what he is doing is the following

Thus, if he works out for 2 hours and his kJ for that ride was 1,000 calories he assumes that the 1,000 calories measured by his power meter includes the 200 calories his body would have burned during those two hours

As for whether or not he’s correct…I don’t know.

Obviously some portion of your BMR is still going to vital functions that keep you alive during that ride (organ function, etc.) - his theory is that the kJ measurement for those two hours accounts for his BMR

Personally - I would use 3,400 as my daily target in the above example (and I have been following that approach for a long time), but I think someone with a better understanding of the science would need to weigh in to prove either of us wrong

It;s something that I may have been mis-advised about by a coach, years ago.

If you’re measuring energy spent with a power meter, it just adds on to your BMR. The power meter is measuring extra work delivered to the pedals by you above and beyond base calorie expenditure, which doesn’t make it to the pedals.

Some HR methods “include” the fraction of BMR that happens during the activity. So, if you exercise an hour and your BMR is 2400, it’s 100 kcal higher than you might expect. You can tell if you record an “activity” that it just resting: it will have some calorie expenditure. Some HR methods dont do this, though.

Thanks. I understand how it was calculated but not WHY it was so.

Yeah - I think I understand the why, just don’t agree with it

It doesn’t make sense when you’re using a power meter. The coach from years ago might have been using HR-based calculations, for which BMR might factor into the total calories expended. Powermeters are strictly measuring power to the pedals (or hub or wherever) and spitting out work performed moving the bike, and nothing else. So it doesn’t make sense to subtract BMR in that case since you’re performing all the other basic functions alongside the ride… in fact, your body overall is probably working harder and burning “basic” calories at a higher rate than your BMR during your ride in order to maintain core temperature, but I wouldn’t have the first clue how to estimate that marginal factor.

I think the best estimate for most of us would be Ride + BMR = total calories in a day.

Also to make the whole thing a lot harder… If you’re riding in terrain with a MTB for example you’ll get a whole lot more kcal’s burned simply by using your whole body and the PM doesn’t account for that. But if you’re measuring kJ then that effort would be on top of BMR.

I have tested resting metabolic rates and exercise rates through a VO2 max test and as explained to me.
RMR/BMR (same thing) - your calorific requirement if you lay in bed all day doing nothing (1600 calories for me)
Day to day activities add on a small amount (400 calories)
So my daily requirement WITHOUT exercise is 2000 calories
Any exercise is over and above the BMR

I suppose there is some argument to deduct your hourly requirement from BMR but I’d be looking at 67 calories difference.
At higher rates I burn around 700 calories an hour and can’t take that much in hourly so its more about refueling and recovery.

I have recently switched to using just the KJ for outdoor rides (where I have a power meter), but lost expected weight adding on HR based figures from my Garmin 920XT over a number of years (for bike, running and other activities).

One of the reasons I switched to using KJ was because I wasn’t seeing expected results using my Bolt’s kcal supposed expenditure, so whatever formula they are using doesn’t seem to work as well for me.

I always add on the workout kj or kcals above my calculated TDEE.